After a big first week on the trail, we have successfully made it through the infamous 90 Mile Beach! So far so good for both of us, with only some minor blisters and niggles to speak of, we feel pretty lucky to have made it out relatively unscathed compared to many others hikers before us.

In other news, we can now definitively confirm that anyone who says they like taking long walks on the beach in their spare time has definitely not walked all 100km of 90 Mile Beach before!

We’re writing this post from Kaitaia as we enjoy our first rest day and prepare for the equally norious Northland Forest section.

The weather gods were certainly looking out for us during our first week as thru-hikers, with no rain all week and consistent low tides for us to hike the beach on, which meant we were able to walk on hard sand rather than the punishing soft sand.

We started our journey on Wednesday morning at Pukenui Holiday Park, before successfully hitchhiking our way up to the start of the hike at Cape Reinga. We were told by the tourist information centre in Kaitaia that it could take anywhere between 5 minutes and 45 minutes to get a ride. After about 30 minutes of nervously sticking our thumbs out, a quick google of “how to hitchhike” and a brief debate about whether it was thumb out or thumb up, we got our first ride North. We were picked up by local Maori farmer, Shane Murray. After a short but entertaining ride, Shane dropped us off at his driveway and gave us some helpful pointers about getting our next hitch towards the cape. 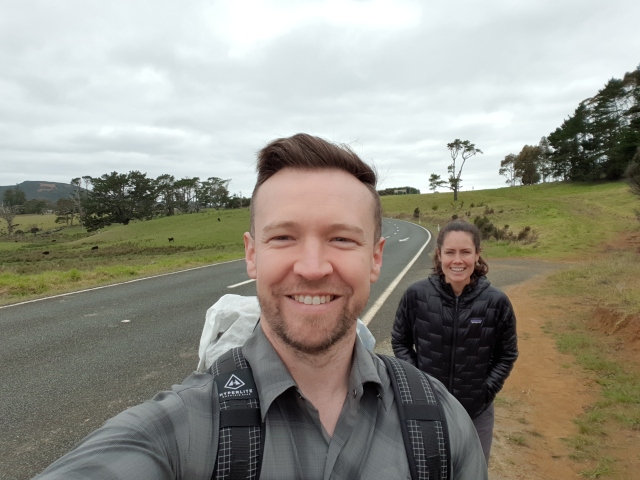 Luck was on our side, we no sooner thanked Shane and bid him farewell when a pair of Germans in newly acquired stationwagons came driving gently down the highway. With only one seat free in each car, we were forced to split between the two cars. They were only able to take us as far at the great sand dunes, but it was not long until we got another hitch with a lovely French couple who took us all the way up to Cape Reinga.

We are very greatful to all of the wonderful people who picked us up off the side of the road and helped us get to Cape Reinga for the start of our 3,000km journey.

On arrival at the Cape we excitedly hurried down to the lighthouse, took a few photos to capture the momentus start to our walk and we were off! The views from the headland were stunning, it was a picturesque start to the journey. Rolling green hills lush with costal foliage, vibrant blue ocean and stark white sands of Te Werahi Beach.

The weather was perfect for hiking, enough cloud to keep us protected from the sun but not enough to bring rain. We dropped down onto the beach quite quickly and after a few kms of sand headed up over the first headland. It was nothing like we expected. The terrain changed from beach to moonscape to something mars-esque with rambling, pink sedimentary hills. 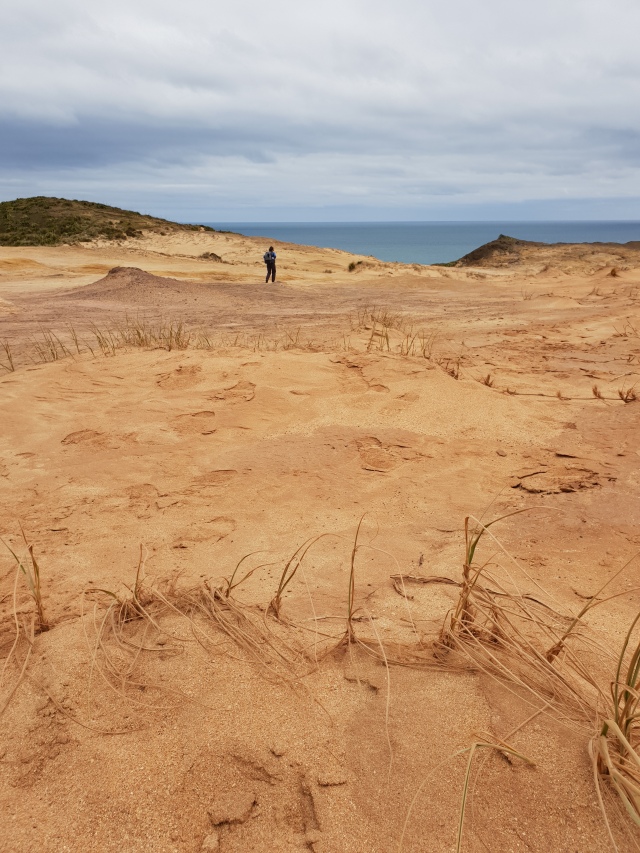 Being a shorter 12 km day, before too long we hadmade it to the campsite at Twilight Beach. Our home for the night it was beautiful grassy spot on the headland looking down over the coast.

We woke up on Thursday morning both feeling a bit nervous about the day ahead.

This was to be our first long beach day and we had read many stories about how challenging the beach leg had been for people and the injuries they sustained from it. Covered in blisters, nursing sore knees, shin splints, the list went on.

Our plan of attack was an early start to allow us plenty of time and to split the day up into 4 shorter sections with breaks in between. The first 4kms of the trail lead away from Twilight Beach campsite and up over the headland.

From the other side of the headland we decended onto 90 Mile Beach via a steep staircase. At the top of the stairs the trail opened up to gives us a magnificent preview of 90 Mile Beach.

With the salt spray in the air you could barely make out Maunganui Bluff in the distance, the locale of our night’s camp site.

We were greatful to have cloud cover and wide stretches of flat sand for the morning making the walking easier. Hours of beach walking can become monotonous to say the least.

We passed some time playing eye spy but soon ran out of things to spy and hiked onwards. We were both feeling good at the morning tea and lunch stops but started to feel a little weary as the afternoon got on. The last 5km of the beach was the toughest but we made it through fairly unscathed.

Maunganui Bluff Campsite was our home for the night. A beautiful spot set back from the beach. A large grass area where local wild horses visit.

We were lucky enough to have a wild stallion greeting us at the entrance to the campsite. Beautiful and shiny with a long mane and tail he didn’t look wild at all.

We were relieved for our first big day of walking to be over but gingerly hoping our bodies (mainly our feet) would hold up for another 31km of the same tomorrow.

In what was our biggest day yet, we set out on Friday morning with 30km of straight sand ahead of us.

We knew what to expect from yesterday, that it would be tough but we could handle what the beach had to throw at us. It was all about mind games today, again we broke it down into sections 12km, 8km, 6 and 4. The less km we had to do at the end of the day the better. 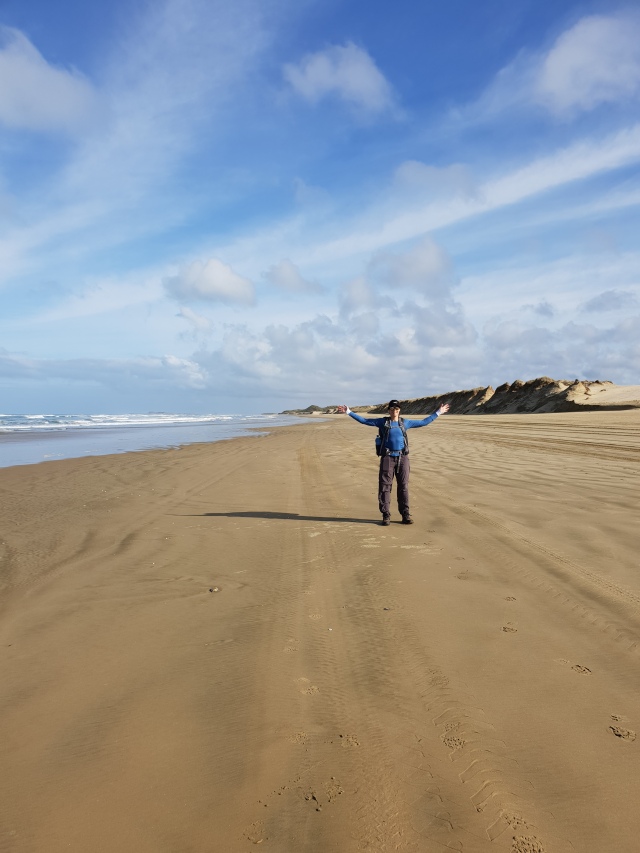 The first 12km went by quickly, still feeling fresh from the morning. After morning tea were feeling a little stiff but pressed on.

Around lunch time we started to feel grumpy. We sat down to eat and were instantly covered in sand by the strong West Coast winds. It was in our food, our bags our water bottles. Everywhere.

It was also around this time that the constant threat of sun and wind burn had us looking like amateur bank robbers! 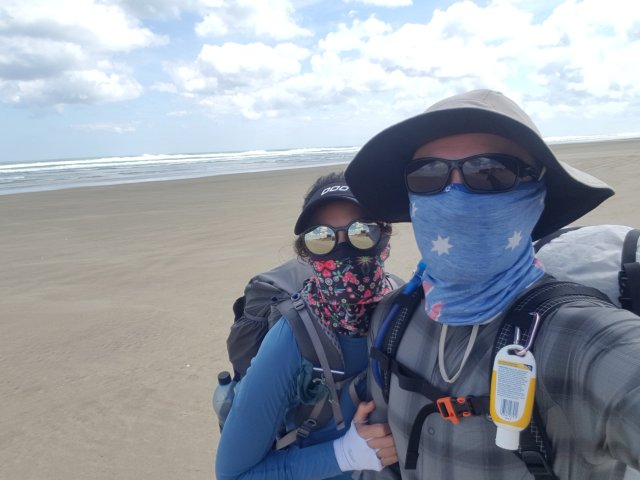 We hoped the sand would at least give us some extra calories as it was well and truly mixed in with our lunch at that point. 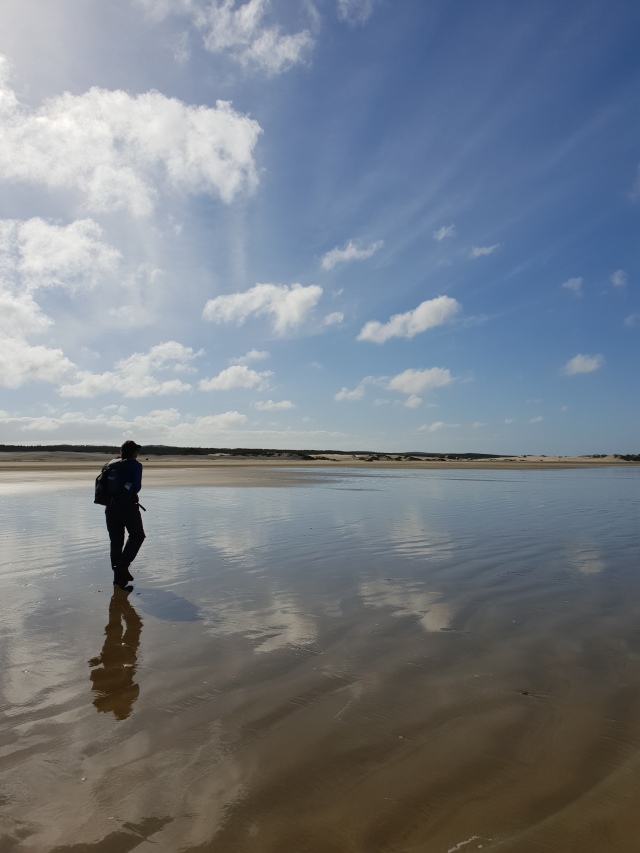 After a long day of hiking we eventually spotted the aqua flag for Utea Park in the distance. 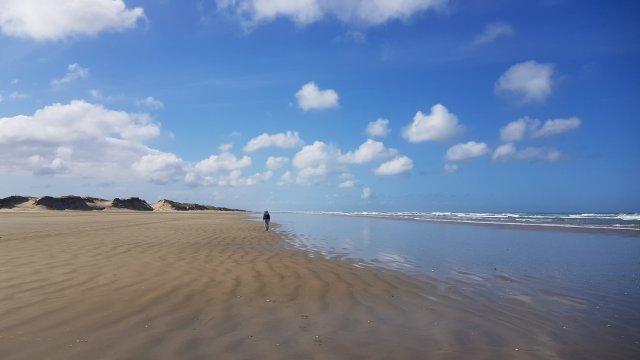 Utea Park has become a little famous on the trail for its hospitality and hiker smoothies, a guest house and refuge where hikers and cyclists can throw up a tent. It was to be our home for the evening. Only a couple of kms off and we couldn’t wait to get up and over those dunes to a hot shower and some rest. The last km or so it felt like the flag was toying with us. Its this dune, no the next one. No the next one!! We were so happy to have finally reached the turn off.

We were welcomed by the friendly Tania who offered us water, hot showers and smoothies. The grass we are camping on for the night is soft and lush. No shoes required. It was like a blessing for the feet.

The shower was amazing. After 3 days it felt so good to be clean again! 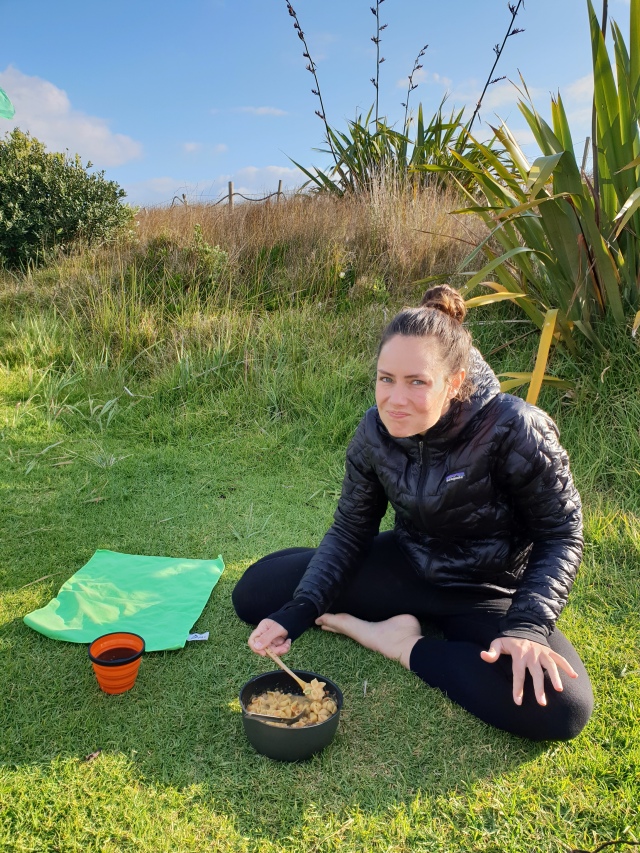 Saturday greeted us with sand, sand and more sand. The highlight of today was a lazy start to the morning, greeted by Tania at 8am holding a tray of smoothies. It was bliss. Such a beautiful woman, she welcomed us warmly and made us feel like we at home.

Although today was a shorter one it didn’t seem much easier than the day before. After the previous 2 days on compacted sand our feet seemed to tire more easily. We were both relieved and glad to have made the decision of the shorter day today rather than trying to push through and do 31km to Ahipara. The 17km day was enough for us.

As we move further and further South we noticed the beach getting busier with cars and people.

For the last couple of days we had been hoping to spot a New Zealand fur seal. We had seen other Hikers photos of them so we knew they visited the beach. Half way though the day, as we were breaking for lunch we finally spotted a sea! Disappointingly it was long deceased and was attracting a large amount of flies.

We couldn’t smell it though so it was either beyond the point of smelling or our clothes smelled so bad after 5 days of wear that they overpowered the stench of a dead seal.

It was a blessing to hit the exit from the beach and get a firm footing on some cement. It felt extravagant to have a shower for the second night in a row so with the opportunity to do some laundry and access wifi the holiday park felt like a luxury 5 star resort. 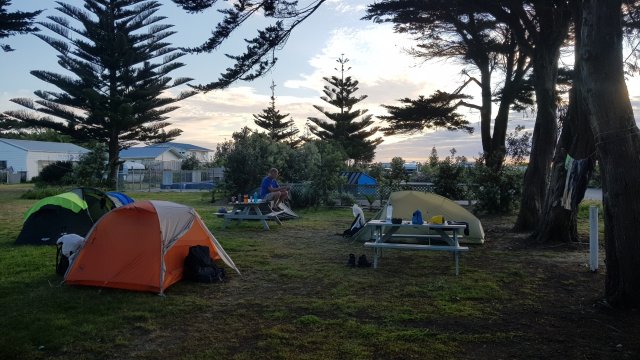 An even shorter day was on the cards for today, only 14 km and we would hit the 100km mark and our first town, Ahipara! 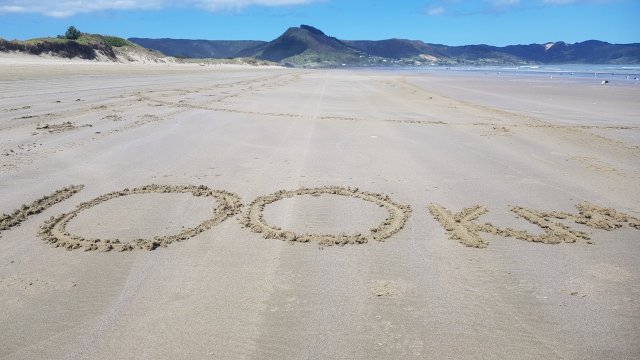 Somehow with the mindset of a short day ahead of us every 5 km felt like 10. The sand of the beach was starting to wear on us – we were ready to head into our next challenge, the forest.

We had read about a good cafe, North Drift in Ahipara town so we skipped our snacks and headed straight for the cafe as soon as we had reached the end of the beach walk. Even after walking 100km, we couldn’t d pass up the 3km round trip for a cafe feed.

Being a small town we thought the cafe might be basic but it didn’t disappoint. A nourish bowl and some wedges for Leigh and chicken tacos for Adam. Leigh was excited to get some fresh veggies into my her and an espresso coffee! It was well worth the effort.

After a quick hitch from Ahipara (figuratively and literally), we find ourselves back in Kaitaia for the day. Just enough time to resupply for the week ahead and try out a new social enterprise cafe in town. Leigh was happy to be able to wash her hair for the first time in 9 days!