Thursday 18 July 2019
Day: 81
Location: Yosemite
Our alarms sounded at 6.30, we packed up quickly, headed up to the Wilderness Centre and position ourselves in line for a Yosemite Wilderness Permit. 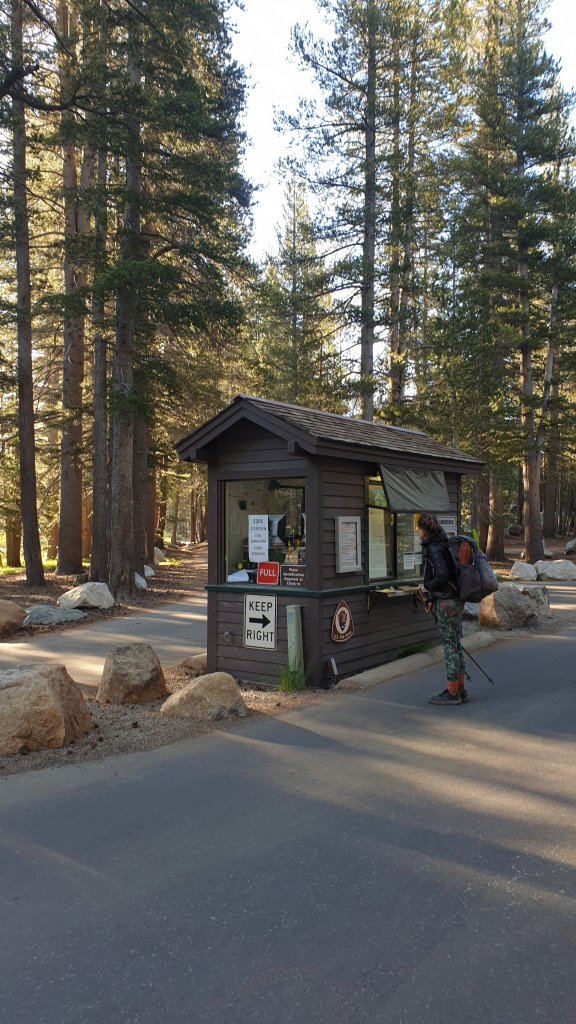 While the PCT skirts around the outside of Yosemite it doesn’t go into the valley. Adam and I have heard so much about Yosemite over the years, watched the documentaries and climbing movies, we couldn’t pass up an opportunity to do some hiking in the park and lay our eyes on the two big faces of El Capitan and Half Dome. The park is very popular these days and as a result the permits are understandably restricted. Because we didn’t know exactly when we would be arriving at the park we couldn’t apply in advance for a permit so we had to try our luck with getting one when we arrived. The park reserves 25 permits every day for walk ups and these can be applied for at 11am the day prior. There are several wilderness centres in the park where you can apply for the permits so the line we would be lining up in at Tuolomne Meadows wasn’t the only cue of people lining up to try to get their hands on one. The system is rather confusing. We knew we wanted to hike up Half Dome and Clouds Rest but didn’t know which permits we would need in order to do that.

I had arrived at the Wilderness Centre at 7.30 (Adam had gone to check out the local grill thinking we had plenty to time, that no one would be lining up yet). When I arrived there were about 20 people in line, waiting patiently for the permits to be issued at 11am. I knew most of the people in the line, other PCT hikers also hoping to get a permit.

I made myself comfortable in the cue, fixed myself breakfast and a coffee and chatted to the other hikers as I waited. Adam arrived just before 8 and a short while after a park ranger came out of the office to begin sorting through the crowd. There were some unallocated permits remaining from yesterday which meant that it would be possible for some people to head straight out on trail today. She asked who would like to head out today and we raised our hands. This was good news. The bad news was yet to come. It turned out that we couldn’t get a permit for the trail head we originally wanted and we wouldn’t be able to get a permit to climb half dome at all. This was a completely separate permit system which we had missed the boat on. It required entering a ballot 2 days ago.

After a lot of confusion and chatting we discovered that we would be able to get a permit for the Cathedral Lakes Trail Head and do a 2 day loop, hike over clouds rest and then head down into Yosemite Valley where we can catch a bus back up to Tuolumne Meadows. Although we won’t be able to hike to the top of Half Dome we will be able to see it from the valley floor. As we were told by the ranger who issued our permits, its better to look at it from the valley floor anyhow. It’s one of the main features of the valley and when you are ontop of it you can’t see it. It made sense to us.

Our permits were issued and we were grilled about our bear canisters, proper food storage, leave no trace principles and we were sent off on our way.

Enroute we stopped off at the general Store, picked up a couple of extra supplies, had a second breakfast and headed out on trail.

While I was in the store picking up my breakfast dessert (yes, icecream sandwich). Adam had a very authentic American experience with a local who was looking for some advice. “Excuse me Sir, do you speak American?” The man asked. To which Adam, a little confused, replied, “I speak English”. The gentleman was a little abashed but turned out to be a lovely guy. 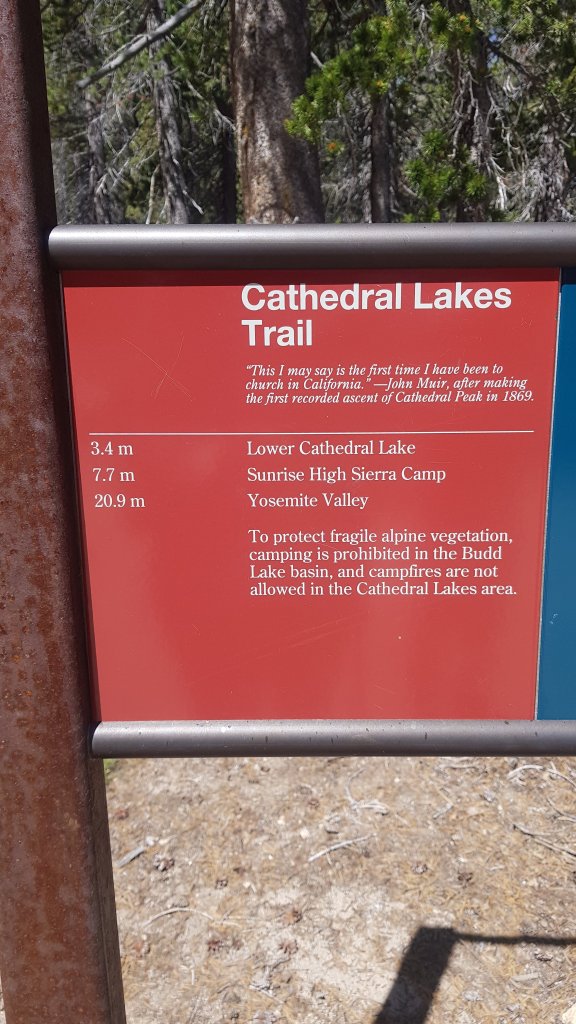 Out on trail, the forest was much like that which we had been walking through over the past couple of days, pine trees, rocky, dusty bareground and patches of the last remaining snow of the season. Unbeknownst to us we had a fair climb ahead of us today. 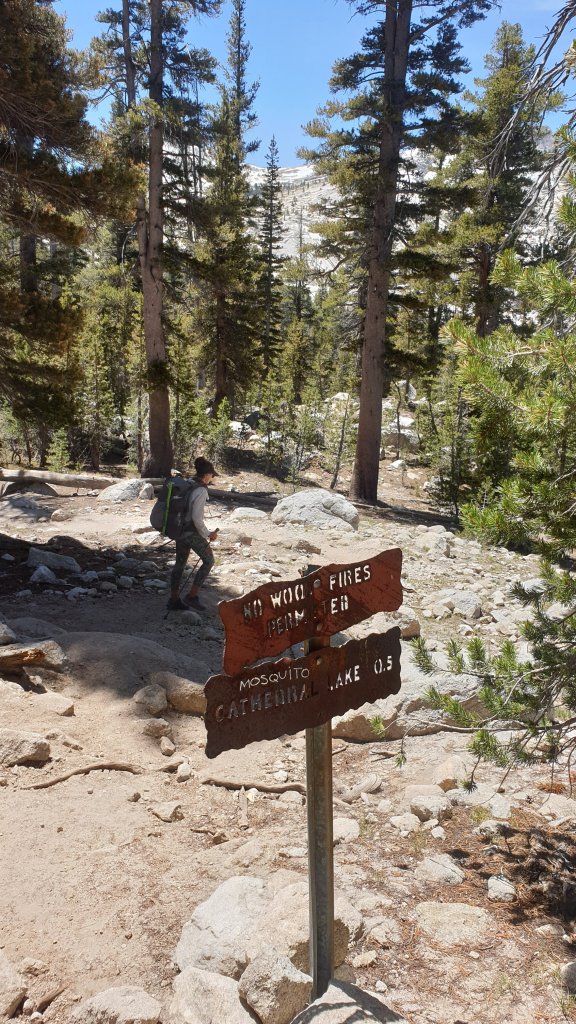 We climbed up to Cathedral Lakes where we took the half mile side trail through a swampy, mosquito dense meadow to reach a lovely sandstone rock lunch spot looking out over Cathedral Lake. 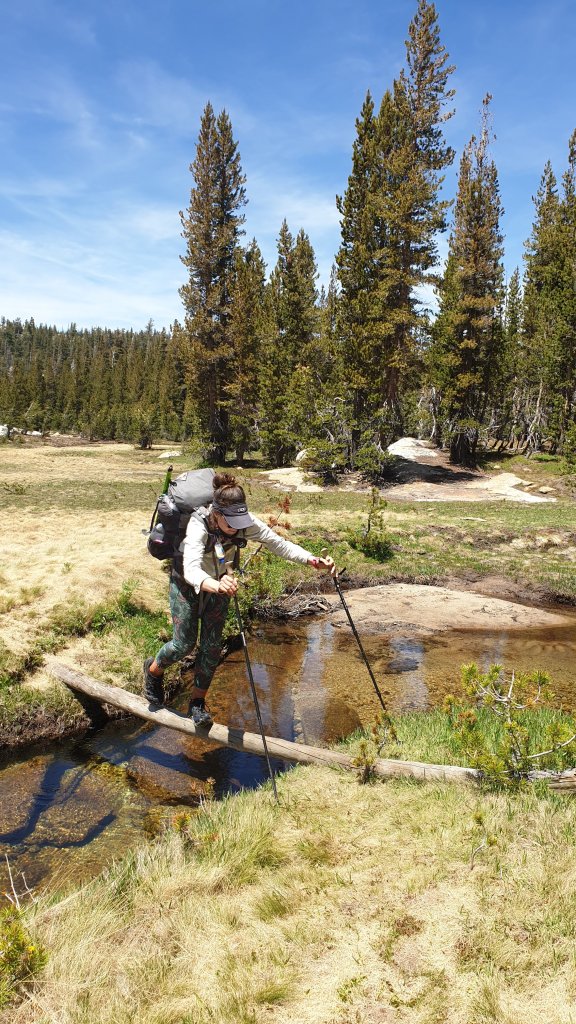 We enjoyed lunch here. There were plenty of day hikers about, day hiking in the park doesn’t require a permit but the number of day hikers soon dwindled when we got back out on trail and past the Cathedral Lakes turn off. 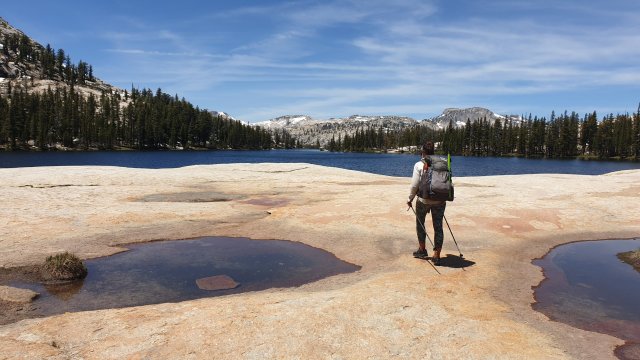 We passed several tall granit peaks which got us excited to see Half Dome and El Cap in the coming days.

From the lakes we climbed up a ridge before dropping down once more into a grassy meadow. 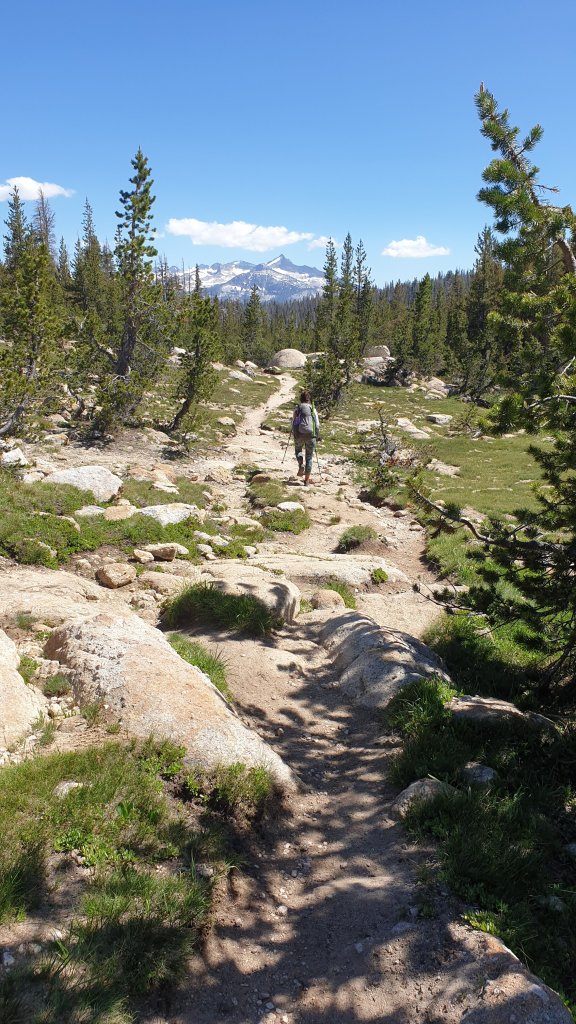 We were technically on the John Muir Trail at this point and had met a JMT hiker who had warned us about the mosquitos through this stretch. She was right. They were bad! I will never in my life complain about the New Zealand sandflies again. The mosquitoes were vicious and in their thosands. They bite through clothing so wearing long sleeves and pants doesn’t help all that much and they somehow even managed to get under my headnet.

At one point the buzzing became intensely loud. I turned my head to the left to see where the sound was coming from and all I could see was a thick, black buzzing swam of mosquitoes. We walked fast through that meadow, took our turn off towards clouds rest and began powering up the hill, thinking we would find a reprieve from the bugs if we gained a bit of elevation. Sadly that was not the case. 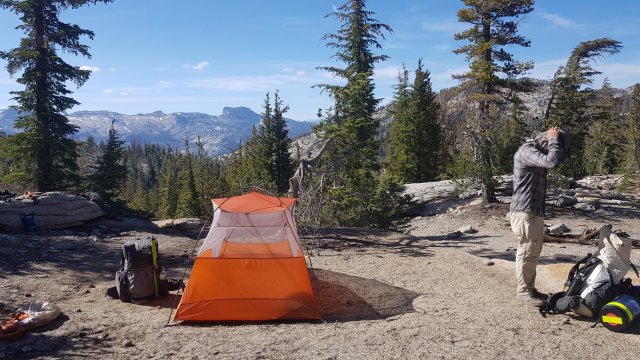 Although we were enjoying the views we were both feeling pretty miserable by this point amd decided to call it a day. We found water and a great campsite with an epic view. After a battle with the mosquitos we threw up the tent and climbed in, happy for some rest in our little mosquito free refuge. 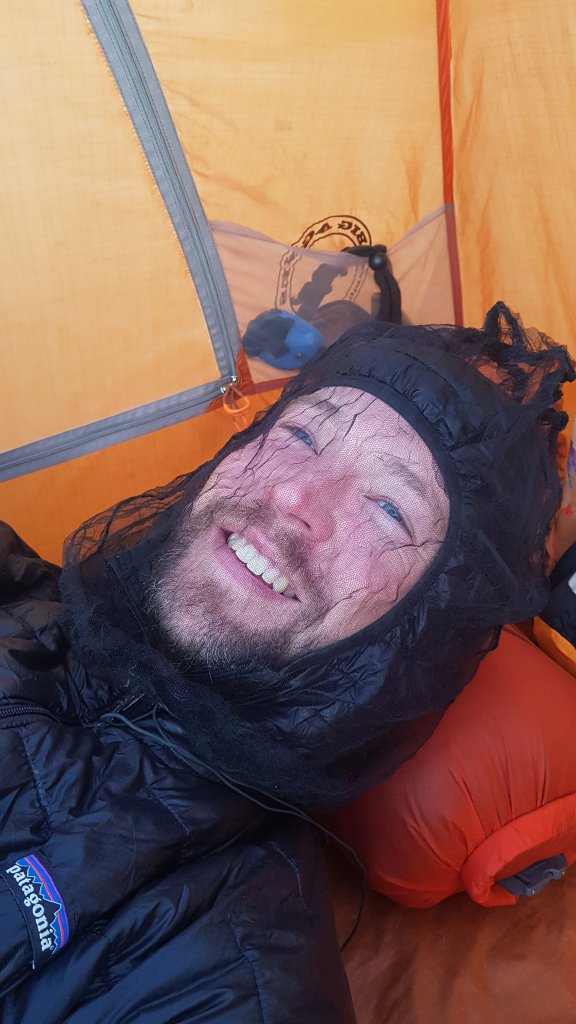 We were both too overwhelmed by the mosquitos to cook any dinner but our treat for the evening was spotting a pair of coyotes roaming past camp. I was hoping to see a bear but this pair made my night! 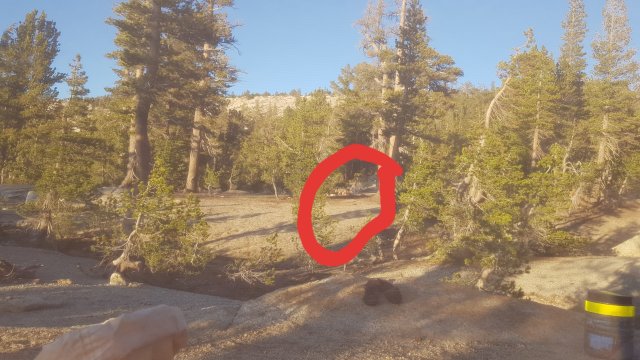 We went to sleep without the fly tonight, watching the colours of the setting sun change over Polly Dome. The mosquitoes might have got us down but the sunset surely made us feel like being eaten alive was worth it. 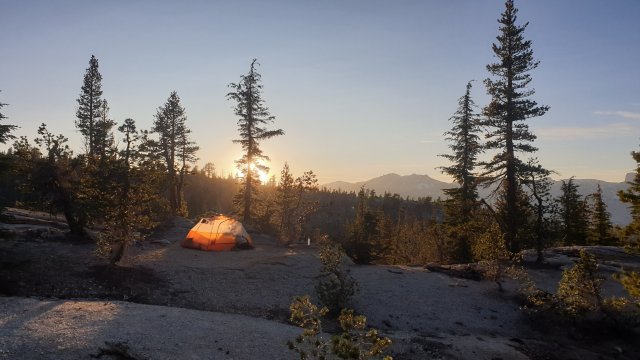 Friday 19 July 2019
Day: 82
Location: Yosemite
We had a short reprieve from the mosquitos this morning, allowing us to eat breakfast and pack down the tent swarm free. It wasn’t long before they came out in force though. The trail dropped in elevation to a valley floor and we walked along the edge of a lake. It was beautiful in the early morning light, the mist still lingering at it’s edges. It was here that the mosquitoes were waiting for us. We put on our head nets and kept moving, momentum being the only real thing to stop them from attacking. 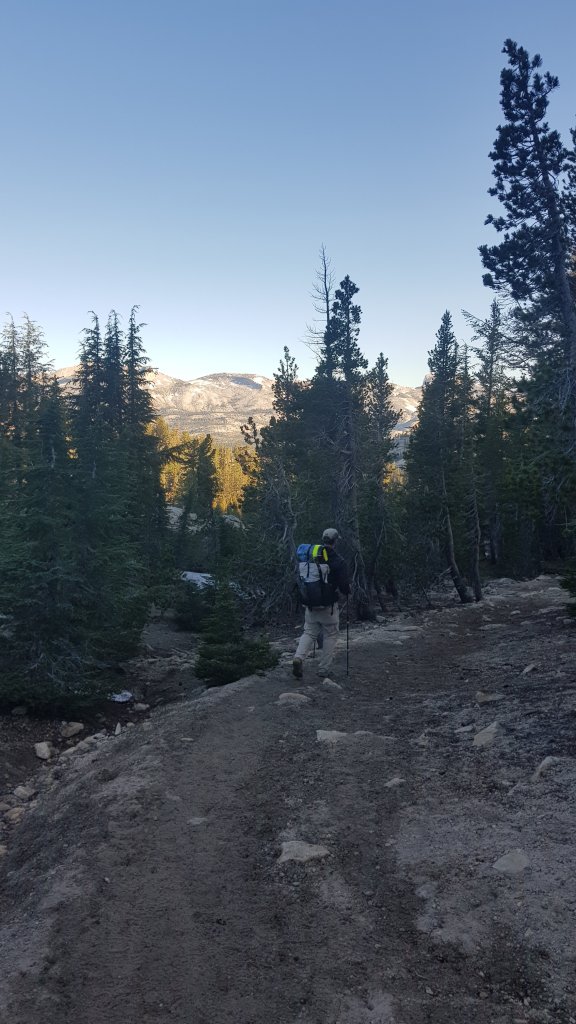 We passed two more beautiful lakes during the morning before the trail began to climb in elevation. Clouds Rest got its name for a reason. 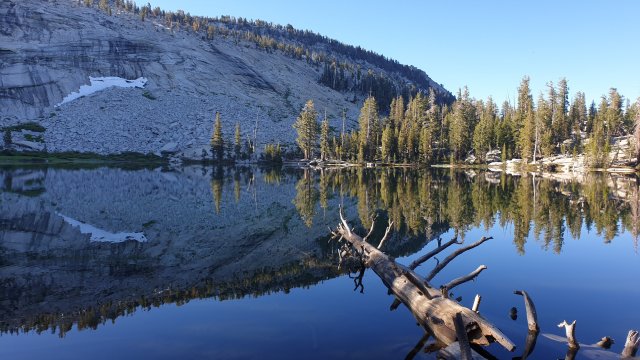 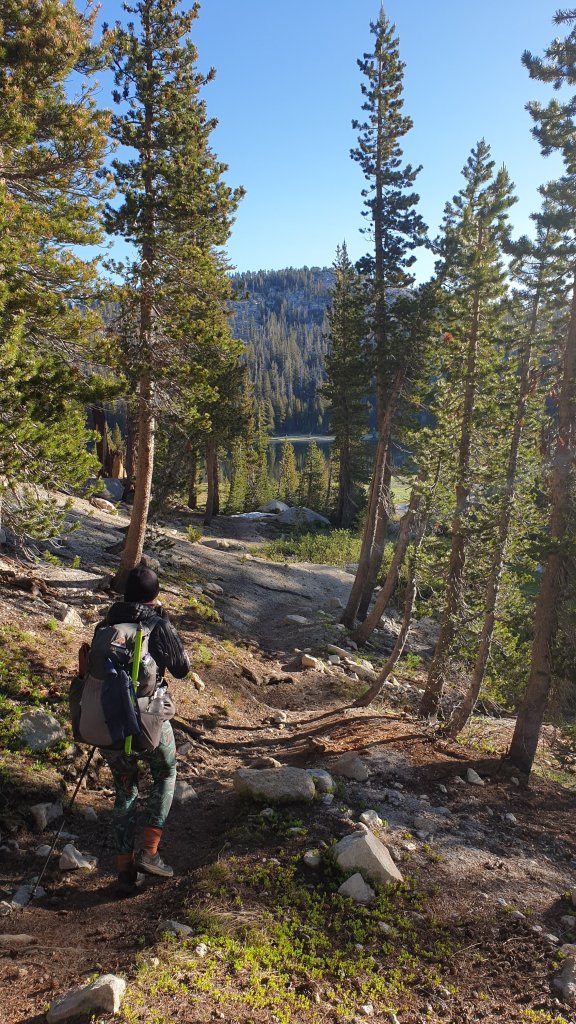 We stopped for a morning tea break on a fallen log and were instantly preyed upon by two cheeky chipmunks. Although we didn’t feed them they were determined to try their luck. After 5 minutes or so they must have been agitated by the lack of food. What seemed to be a turf war broke out between the two. 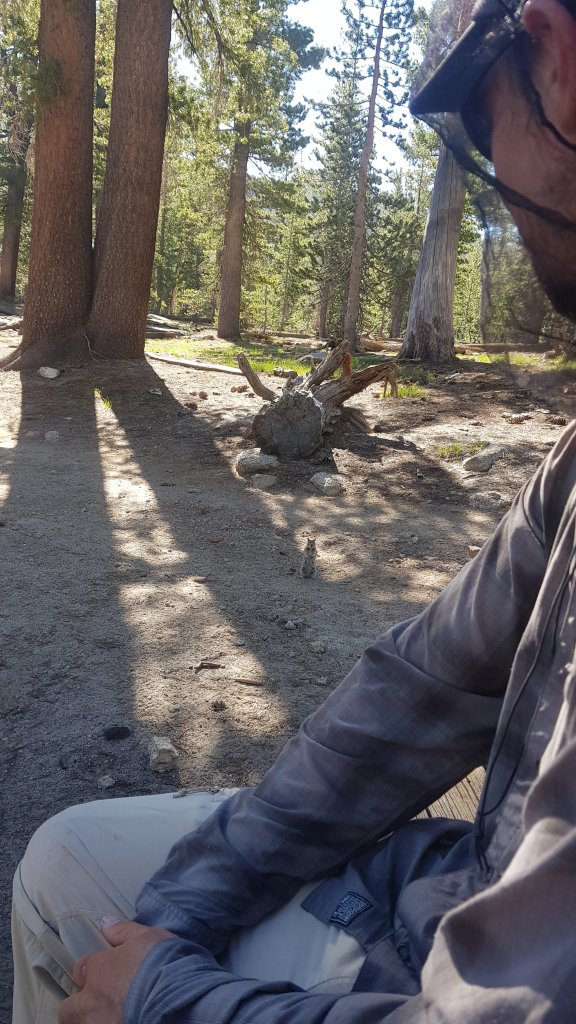 It was only a short break, moved on by the mosquitos we continued our way up the hill to clouds rest. The climb was steep but made worth it when we started to see glimpses of the valley coming into focus. It was finally starting to feel like the last 24 hours of hard work was worth it. 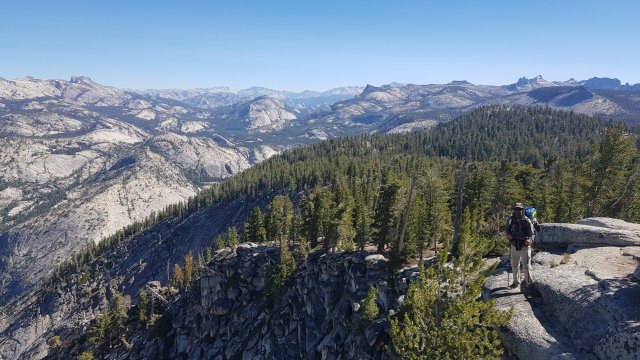 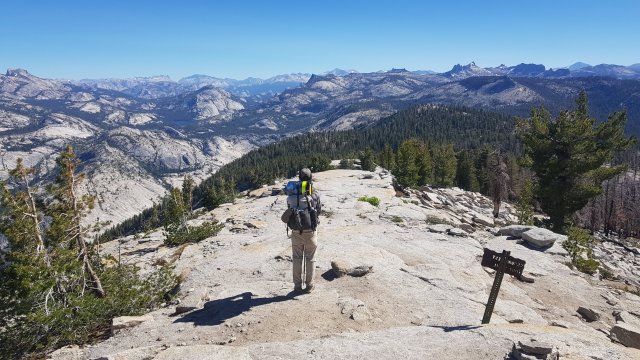 The track became unclear at the top of the mountain and we had to do a little rock scrambling to make our way to the summit. We passed over the peak and infront of us was a grand view of Half Dome and Yosemite Valley. It finally felt like we were in Yosemite National Park.

We took our time at the top, having lunch and drying out our wet sleeping bags and tent from the night prior. With such spectacular scenery we didn’t want to move on too soon. 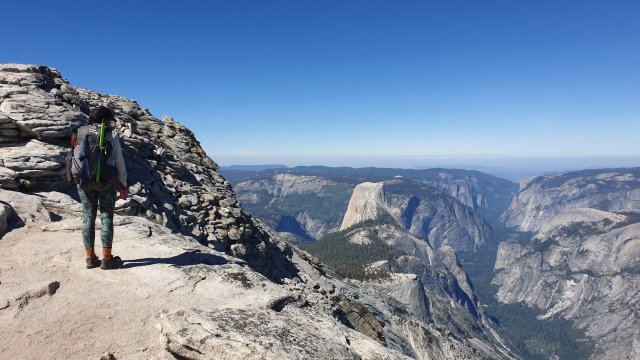 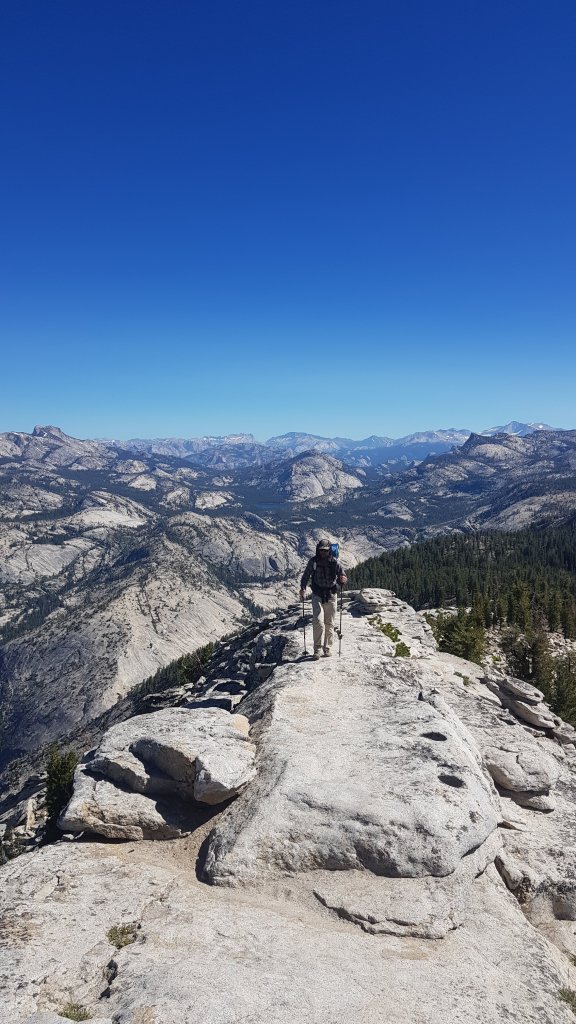 Finally it was time to make our way down. The descent was a lot less challenging that the hike up. It felt good to have the hard work behind us. 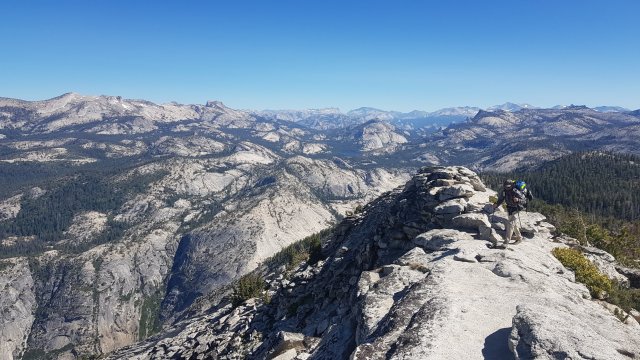 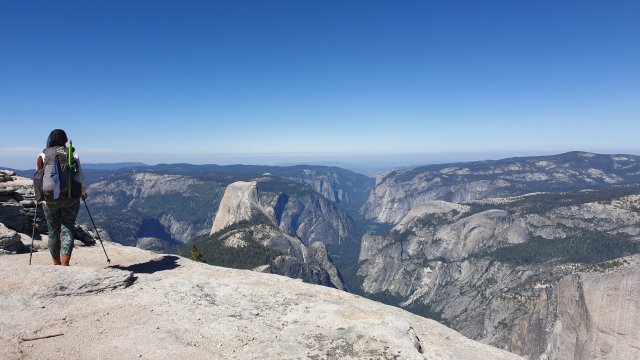 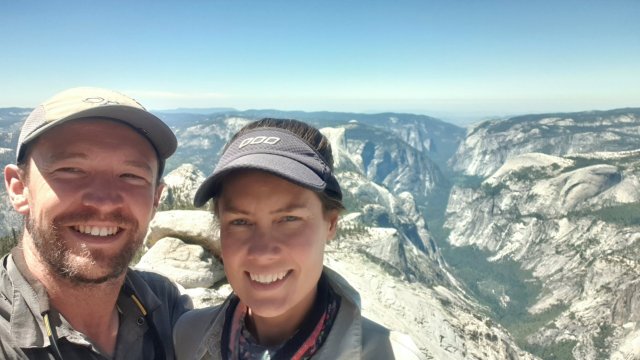 On our way down we ran into a volunteer from the visitor centre who, after chatting with him, suggested we camp at Little Yosemite Valley Campground tonight and head into the valley the following day. This way we would make the most out of our wilderness permit plus and additional 1 night stay allowed in the valley. I had been thinking about this as an option, it was a good idea and would allow us to have a relaxed afternoon, a win win. 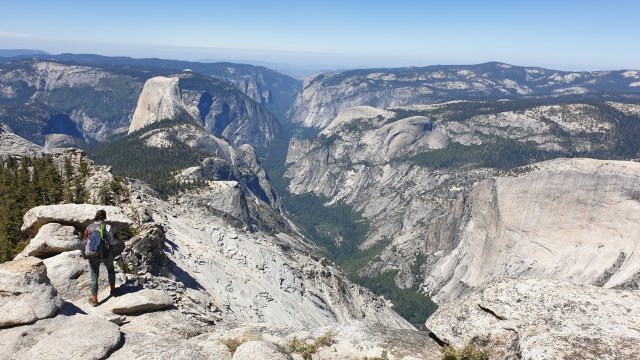 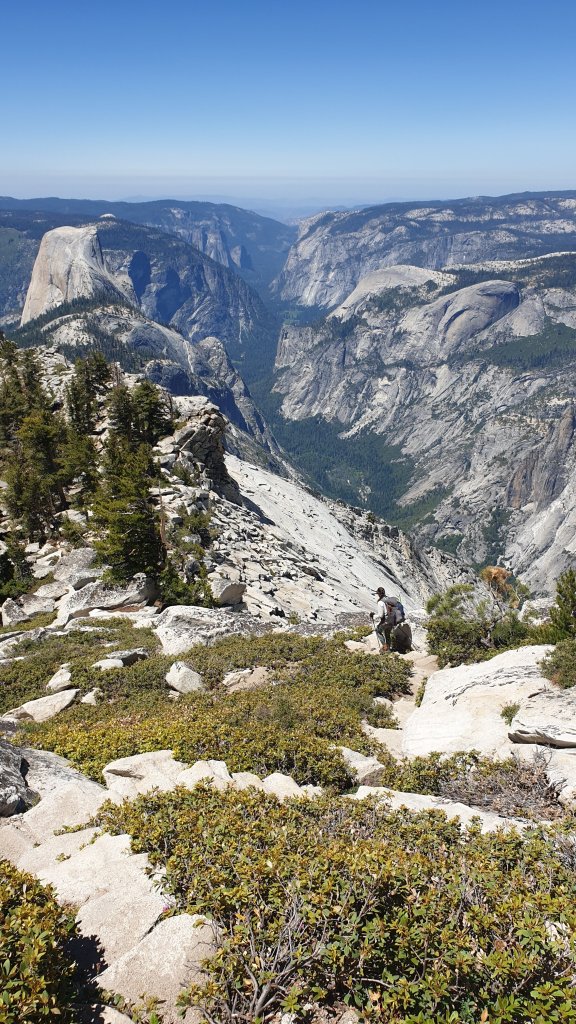 We made our way down to little Yosemite campground, passing by the back of half dome and the junction for the summit hike. 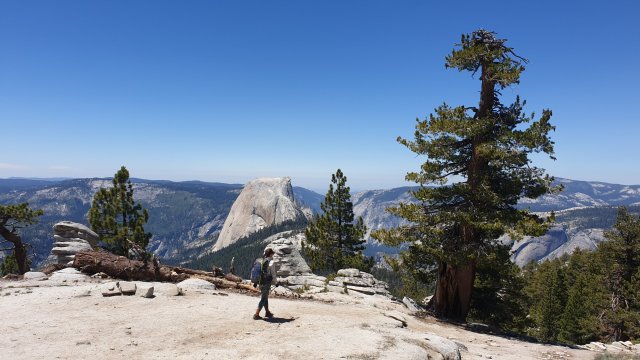 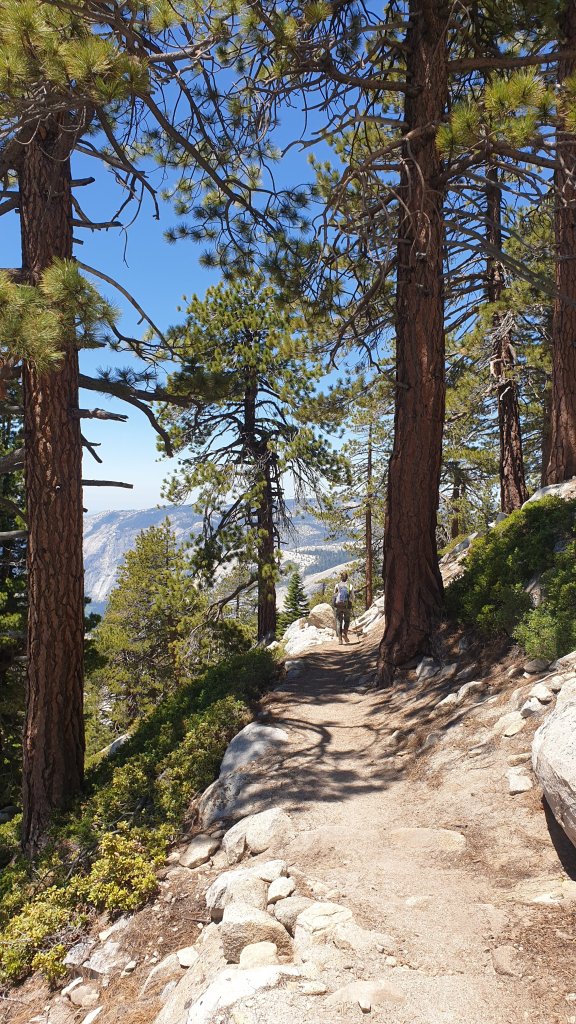 It wasn’t far to the camp, we found a site and were pleasantly relieved to find the area relatively mosquito free. I took the opportunity to go for a swim in the river, it would be another 5 days or so until we would be showering so it was nice to freshen up. 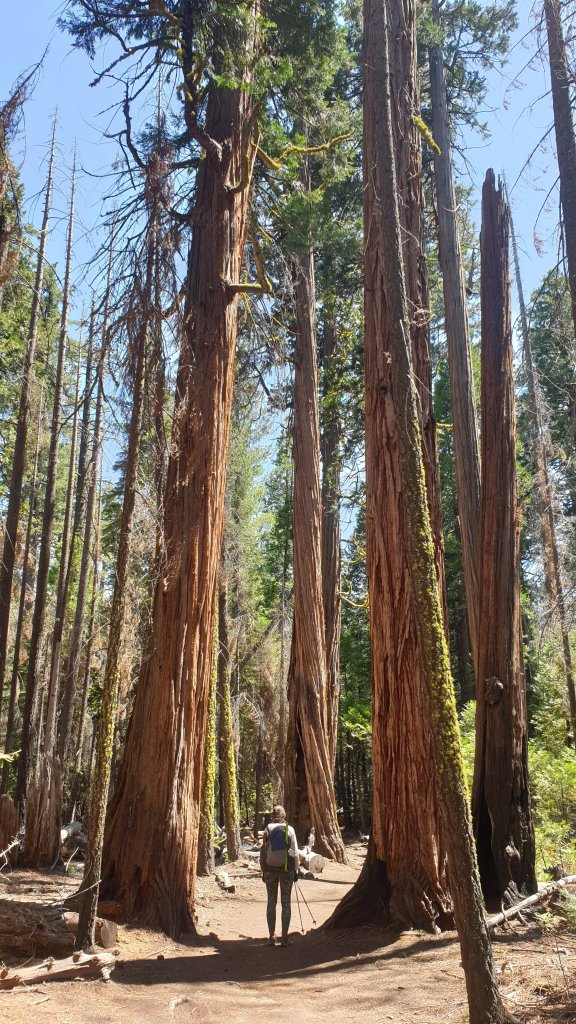