After the monotonous but challenging 90 Mile Beach last week, this week we were greeted with a change of scenery as we entered the Northland Forests… namely muddy mountains, farmland and an assortment of New Zealand roads!

The 2018-19 Te Araroa trail through the Northland Forest section has been drastically modified compared to last year, largely a result of DOC measures to stop the spread of kauri dieback desease in the area. In essence, for TA hikers this meant that former forest trails were replaced with alternatives through private farmland or along nearby roads. Fun times!

Our feet, ankles, knees and other moving parts have held up better than expected so far, with nothing more than a few minor aches and pains to speak of after almost two weeks on the trail. In any case, we decided to take a rest day in Kerikeri to give our feet a short reprieve, which is where we are writing this post from.

The weather gods have also continued to look after us – in two weeks of hiking we have really only seen rain on one day, and that lasted for all of about 2 hours on Friday morning.

We couldn’t really have imagined a better start to our 6 month journey!

An early start on Tuesday morning allowed us to swing by both the local chemist to pick up a few bits and pieces, followed by the post office to sort out our bounce boxes (ie. boxes with excess gear that we will need later on in the hike but don’t want to carry unnecessarily so we send it forward to the next town on the trail).

It was then down to business… securing a ride from Kaitaia to somewhere close to the Raetea Forest trail and to avoid some less than safe sections of road walking on the State 1 Highway. As we are quickly becoming seasoned pros at the hitchhiking game, we expected a relatively easy time finding a hitch out of Kaitaia.

It turned out we may have been a tad optimistic, as it wasn’t until almost an hour later that we were able to grab a lift with a local lady who was on her way to visit her grandmother.

While we were grateful for the hitch, we were still about 5km away from a safe spot to start walking, so we decided to try for a second hitch, which I managed to lock down with a local Maori guy after about another half an hour wait.

For those of you keeping score at home that’s 4 hitches to Adam, 2 hitches to Leigh 😉

With our highway hitches behind us (and country road traffic almost non-existant), we still had a 12km road walking through the town of Takahue ahead of us to get to the start of the infamous Raetea Forest. 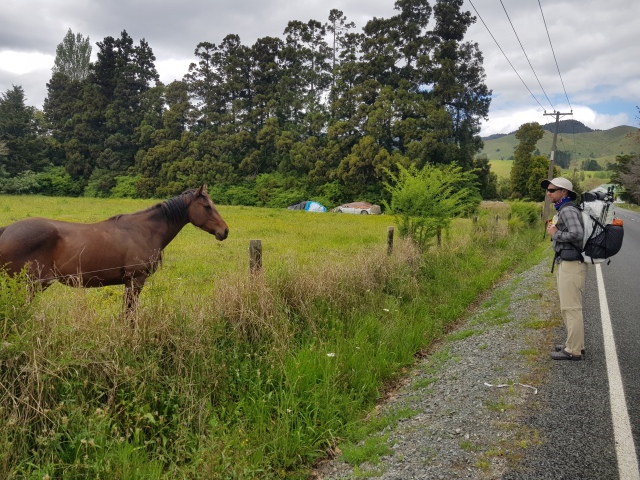 Before we knew it, we had arrived at the Raetea forest marker after passing by some stunning farmlands.

With no official campsite for the night, we chose to take on a short but steep climb up a bush track to a small roadside campsite next to a mountain stream.

The magnificent views across the valley made us forget about the fact we were climbing the hill with fully packs loaded for the week.

After setting up camp next to our trail friends from Switzerland and Sweden (who we have been walking with since 90 Mile Beach), we ended the day in a two hour conversation with a local by the name of Johnny who was the first person to move into the area almost 20 years ago. With conversation topics ranging from local history, spirituality, intelligence, space and time, to solving the world’s important problems, we were ready to pass out for the day by the time Johnny had used his trusty staple to kick over his motorbike and head back down to his property.

Raetea Forest had loomed large for us for some time now – the accompanying trail notes suggested that we should expect to travel at around 2km/hr and we had heard the horror stories about the muddy forest tracks within. Still, we figured there had not been any real rain since arriving in NZ, so maybe we would be lucky🤞

Things started off pretty dry, however, we quickly realised that even in good weather the muddy sections of the Raetea Forest see very little direct sunlight, which means their consistency ranges from muddy on a good day to the stuff of nightmares in proper wet weather!

Fortunately for us, the lack of rain meant we were tackling this section in conditions that were about as good as we could hope for. Still, our zip-off hiking pants came in handy as we ended up being covered in mud up to the knees by the end of the day. 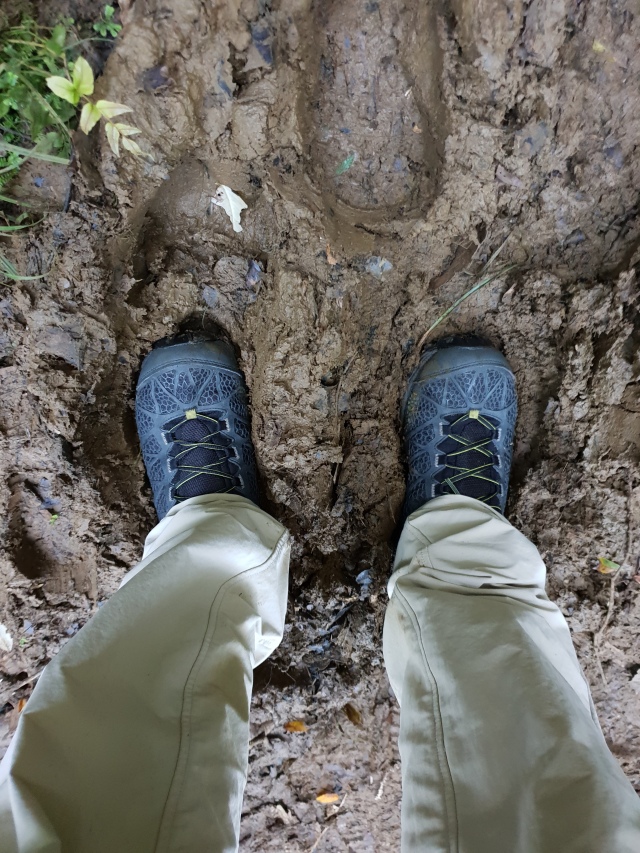 The mud was definitely a change of pace from the beach – we had to concentrate on every step to avoid the deepest parts of the mud. Still, it was actually quite fun to begin with.

We made it to the Raetea summit by lunch time a were rewarded with stunning views out to the coastline.

We had expected that the worst was behind us after lunchtime… but we couldn’t have been more wrong.

The further we walked, the worse the mud became and we also started having to contend with a quite a lot of fallen trees which made following the trail a real challenge. Thankfully we were able to bounce things off one another to make sure that we went the right way, most of the time.

After more than 9 hours hiking through the forest, we finally emerged onto a farm and made our way down past the welcoming party of a dozen barking farm dogs to our campsite for the night. 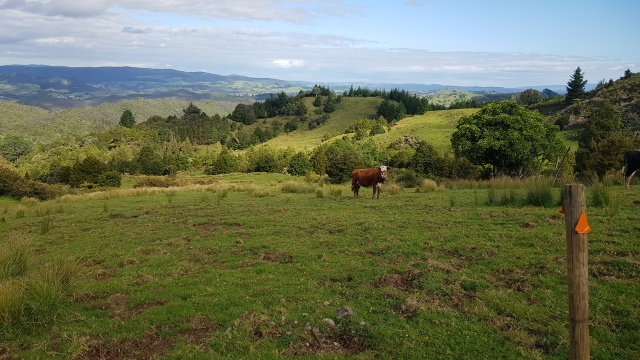 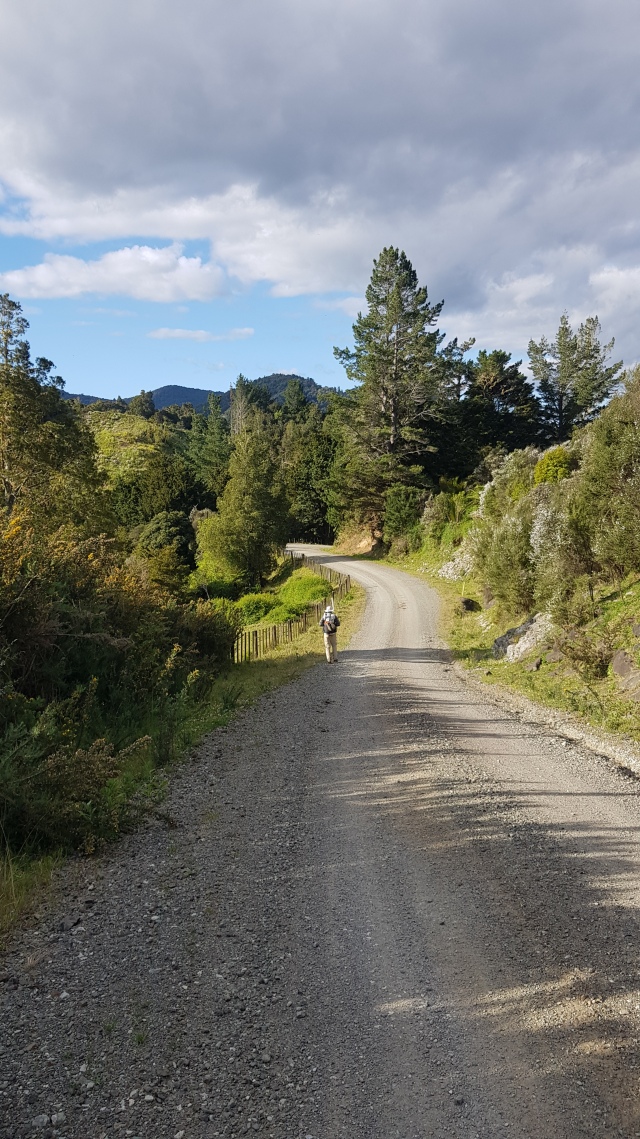 With Raetea Forest now behind us, we had little standing in our way of our journey to the famous Mangamuka Dairy – an oasis for the weary hiker where anything from toasties to burgers to ice creams could be devoured!

We flew through the 6km of road separating us and the dairy and promptly called our shots – toasties for our 2nd breakfast, coffee for Leigh and a cold ginger beer for me. Followed up with an ice cream, of course. 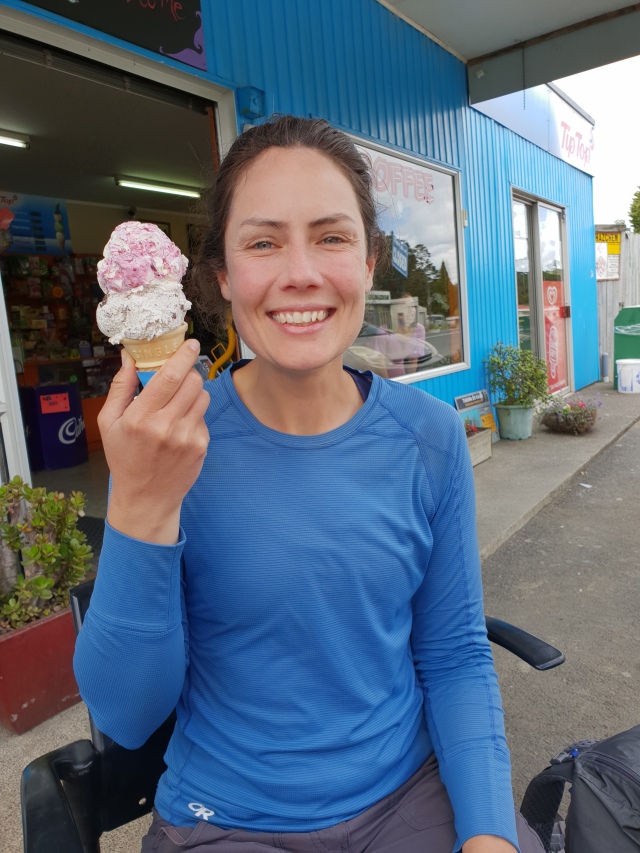 We contemplated waiting at the dairy for lunchtime to arrive, but with the risk of us never leaving becoming greater by the minute, we forced ourselves to move on from this magical wonderland. 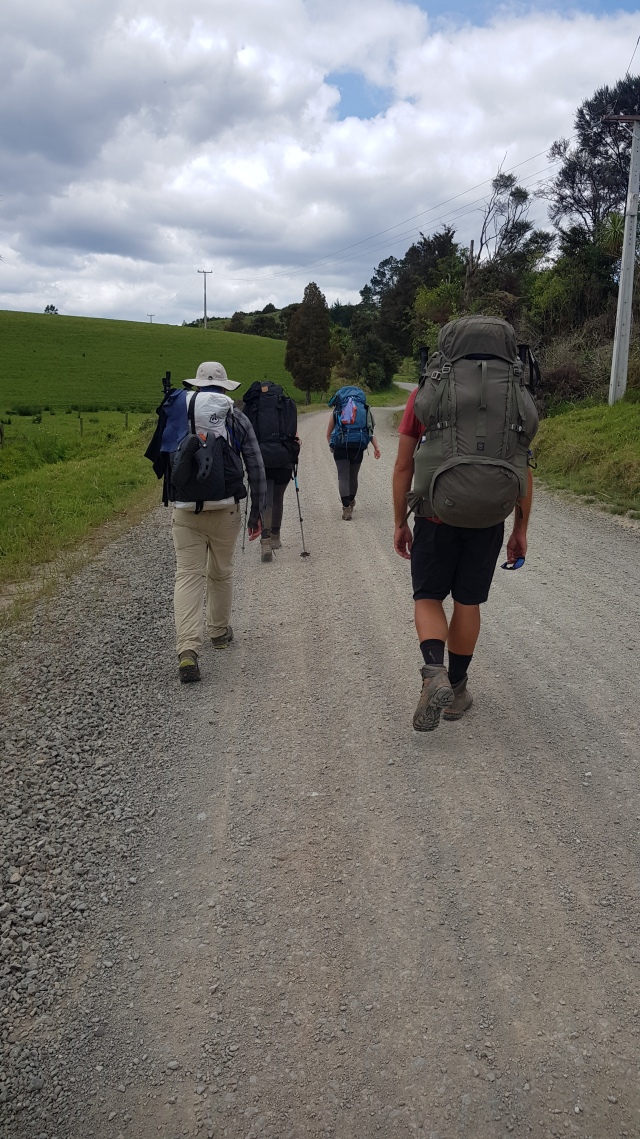 It was another 12km of road walking past farmlands and along gravel logging roads before we reached our final destination for the day – Apple Dam campground… where we discovered the ground is as hard as concrete and the drinking water is a nice shade of yellow.

We awoke to the sound of rain on the tent fly, for the first time since setting off from Cape Reinga a week and a half ago.

After quickly packing down the tent, we set off by 6:15am (our earliest start yet), conscious that this would be a tough day on the trail.

Ahead of us was 32km of hilly logging roads, which would be our longest day on the trail so far.

We made good progress through the early rain, testing out our rain gear for the first time on the trip (including my orange garbage bag rain skirt). During our morning tea break we ran into a local farmer who was driving past and stopped for a good chat about life, travel and the local area. It was a nice break ahead of what would be a tough back end of the day as the pain in our feet increased for every hour that we were on our feet. 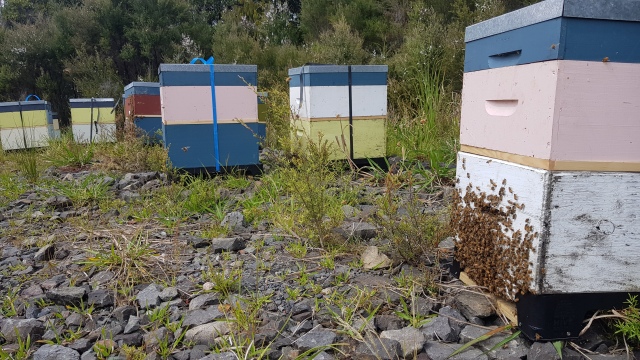 By early afternoon we had made it out of the forest, but the remaining 5km of roads which we had planned to hitch turned out to be traffic dead zones, which meant we would be walking them too. After following the logging road downhill at the end of the forest, we were sent back uphill for much of the last 5km, taking what felt like an eternity under the beating sun to reach Puketi Forest Recreational Area.

Leigh still managed the energy for a quick side trip to see the majestic kauri trees in the Puketi Forest. 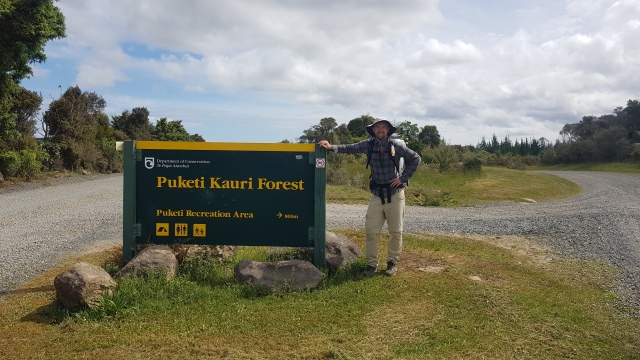 We contemplated hitching into Kerikeri from there in order to pick up our bounce boxes from the post office before the weekend but decided instead to camp at Puketi Forest Recreation Area as we were both feeling pretty wrecked by the end of the day and the idea of having to walk even a few more Km’s in search of a hitch into Kerikeri was less than appealing.

With the post office only open until 12.30pm, we set off early again, aiming to arrive in Kerikeri with enough time to spare to allow us to get to the post office to collect our bounce boxes before it closed for the weekend.

Leaving the Puketi Forest Recreation Area under the cover of misty skys, we found ourselves traversing across a working farm, dodging sheep and cattle along the way. Everywhere you looked, green was all that could be seen.

While the idea of hiking across a farm may sound idyllic, we had not anticipated how tough the ground would be to actually walk on! The livestock had torn up a lot of the ground which meant that even though the hills are stunningly green, you end up really needing to pay attention to where you put you feet, just in case you trip over the livestock trodden ground. 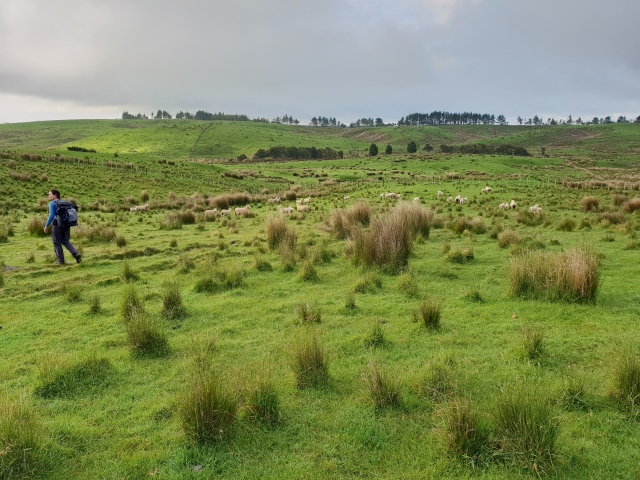 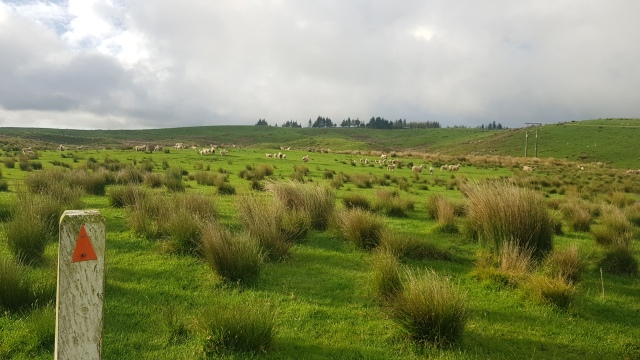 Still, everything was going well until we hit two streams on the farm, each about 2m wide. We spent a good 20 minutes trying to figure out the best way to get across without getting our feet wet. Eventually, the best option we could come up with was to climb along the fenceline while shuffling our way over pieces of broken wood and metal that were hanging in the water. 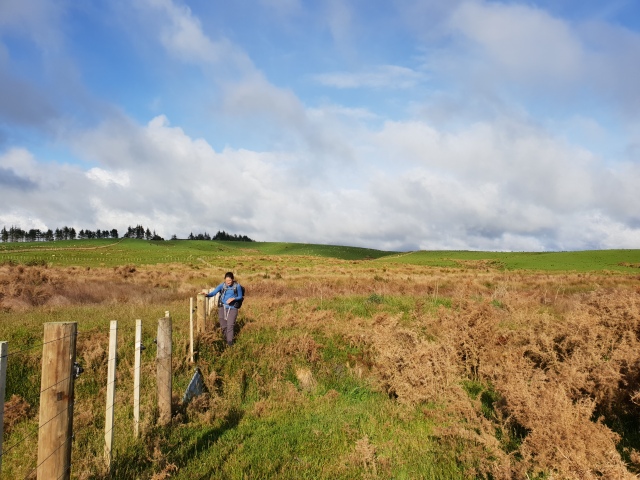 With that mini adventure behind us, we hit the road again and headed for Kerikeri town. Within half an hour, Leigh was able to pick up a ride for us with a “red-headed angel”. A local physio who was on her way to play a game of Pickleball, not only did she offer to go out of her way to drop us at the post office, she also gave us a few tips for things to do around town and even showed Leigh how to lace up her boots in a way to give more ankle support. We couldn’t have asked for a better start to the day!

Arriving in Kerikeri a few hours earlier than planned meant we had enough time to collect our bounce boxes and head out to the local packers market for a tasty lunch.

We topped off the day with cheese, wine, and pizza with some of our new hiking friends in Kerikeri.

Making the most of our rest day, we headed out for breakfast in Kerikeri and spent the morning planning out our next week of hiking.