Growing up, I definitely considered myself more computer nerd than outdoor enthusiast. Thinking back to when I was a kid, I would have never imagined that I would be capable of taking on an adventure like the one that we are about to undertake.

While I’ve always been at home in the ocean (by virtue of growing up near the beach in Wollongong, about one hour south of Sydney), it wasn’t until my uni years that I caught the travel bug. After getting my first full-time job I switched to part-time study to finish my Commerce degree. With the extra income I forced myself out of my comfort zone taking a number of solo overseas trips.  This included my first overseas trip as a contributor to a Fijian community tourism project, Tribewanted.

Fiji became a home away from home for me during the late 2000s, on a little island off the west coast of Vanua Levu called Vorovoro. In hindsight, taking part in Tribewanted was a significant milestone in my transition to outdoor enthusiast, exposing me to travellers from across the world, where was able to soak up lots of wisdom and experience from local Fijians and globetrotters alike.

Within a year of Tribewanted’s completion, I had graduated from uni, accepted a graduate position with PwC in Sydney, and starting dating Leigh. Our relationship opened up a whole new world of opportunities for travel and exploration.

Born and raised near Sydney in a small town on the outskirts of the Royal National Park. Growing up so close to the Royal National Park meant that as a child, nature was always a part of my life. Our family back yard was (and still is) half bush which meant unlimited access to explore and develop a curiosity for the natural world. I was an overly keen girl guide, loved learning new skills and going on outdoor adventures. However during my teens, this love of the outdoors took a back seat as other hobbies and interests stole focus.

After finishing school I went on to study Commerce at University. It was during my university years that I developed a keen interest in, and what would later turn out to be, a fully fledged love for travel. I took my first overseas trip to Singapore with a group of girlfriends and, having been well and truly bitten by the bug spent my semester breaks travelling through India, Nepal and Tibet. Following graduation I undertook my first solo travel adventure. This was where the love affair really took off. What started as 4 weeks in Southern Africa quickly turned into 4 months through Mozambique, Madagascar, South Africa, Botswana, Zambia and Lesotho. This trip not only crystalised my love for travel but reignited my passion for outdoor adventure. I learnt to scuba dive, went bungee jumping, white water rafting and hiked through the Drakensberg Mountains.

Crashing back to what I saw as ‘reality’, I graduated university with a major in Accounting and soon after pursued a graduate role with PwC. Kicking off my career in the business world, it was at PwC that the all encompassing, dedication to the corporate ladder climb began. It was also here that I met Adam.

Meeting at a mutual friends birthday in 2010 we bonded over a shared love for travel and adventure. This bond quickly grew into a love for each other and what has now been 9 years of shared adventure by each others side. Together we have embraced the big and the small, scaling Malaysia’s Mount Kinabalu, diving off Sipadan in Borneo, spotting Komodo Dragons in Indonesia and playing foster parents to numerous street kittens and pound puppies who have come through our door.

In 2012 Adam decided to pursue his love for the outdoors, taking 12 months unpaid leave from corporate life to complete a Certificate III in Outdoor Recreation. From here on out we spent many a weekend hiking, camping and adventuring. Finding relief from corporate life and the concrete jungle in the National Parks and forests on the outskirts of Sydney.

In 2014 Leigh came across an article in her health fund’s magazine about walking holidays on long distance hiking trails. It was here, in the least likely of places that she first read about the Pacific Crest Trail. A 4,265km journey from Mexico to Canada. The article was quickly torn from the magazine and posted on the refrigerator with the thought of “what an incredible adventure, I would love to do that one day”.

Along side the PCT the article also featured the Larapinta Trail. Research began and quickly our next holiday was set. In July of 2015 we hiked 234km through the West MacDonnell Ranges from Mount Sonder to Alice Springs. Larapinta was a challenging but rewarding trail. We walked into Alice Springs in a state of euphoria and our love for long distance hiking was born. In 2016 we tackled Victoria’s Great Ocean Walk, spending New Years Eve walking the 100km iconic coast line from Apollo Bay to the 12 Apostles. Our hunger for long distance hiking continued to grow and we were again on the look out for a new adventure.

In late 2017 Leigh’s role as Finance Manager to a tech start up came to an end when the company closed down. It was a challenging time dealing with the winding down of a business and facing the loss of a job she really enjoyed after years of dissatisfaction in the corporate world. It was during this time that we started to seriously consider the idea of thru-hike. The timing was lining up for us with Adam coming up to 10 years long service with PwC the following year. The timing however, was not lining up for our dream trail, the PCT. With the PCT season running from April to October our window of availability was the complete opposite time year. 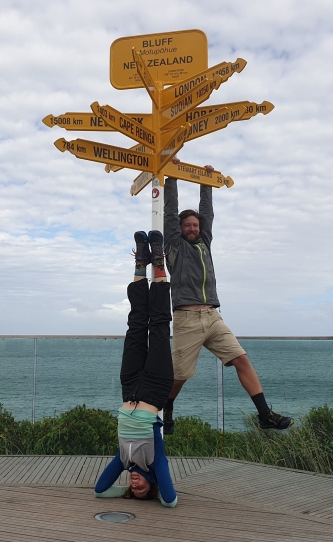 Whilst on a  much needed mini break in New Zealand, Adam came across a coffee table book, ‘A walking guide to New Zealand’s Long Trail – Te Araroa’ at our B&B. With much research, open minds and embracing the notion that everything happens for a reason, we committed to embarking on a thru-hike of the TA.

After much planning we set out from Cape Reinga on 17th October 2018 and after 148 days, walked into Bluff on the 13th March 2019. The TA was an epic adventure, teaching us a lot about life and ourselves. The trail challenged us mentally and physically and affirmed our love for adventure and the outdoors.

The decision to continue the adventure came naturally, as we neared the end of our TA journey we decided to extend our career break from 6 months to 1 year and with our newly gained trail legs, set out to walk from Mexico to Canada on the PCT.

2 Comments on “Our Story”