We had over 4 miles to reach Silver Pass so were up early again, leaving the campsite by 7am. 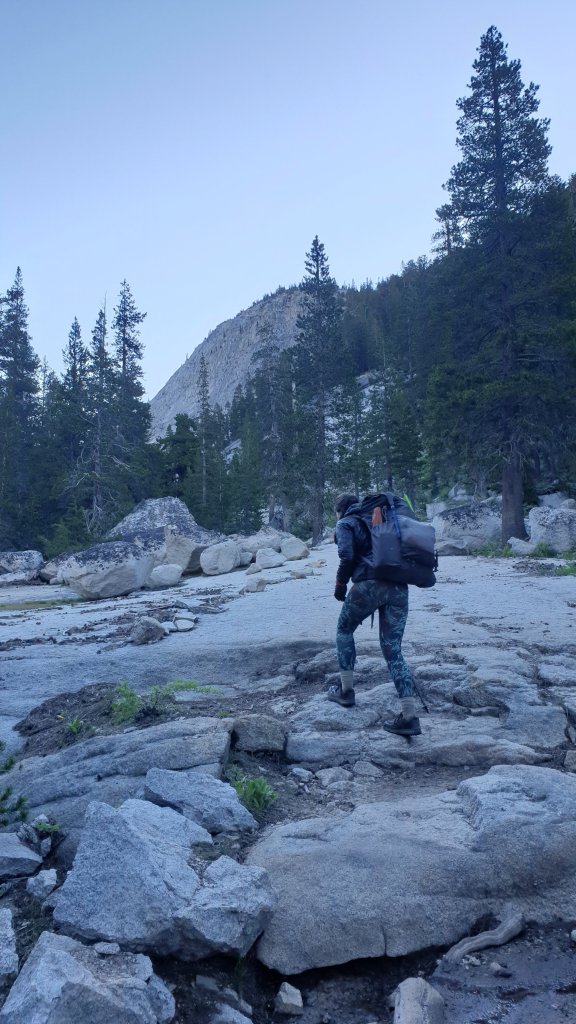 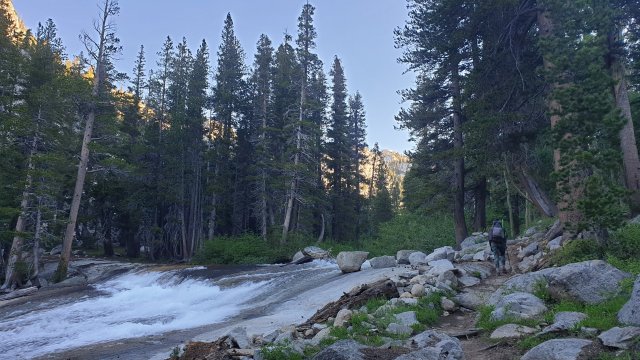 The plan is to reach Reds Meadow tomorrow. Reds Meadow is a ‘resort’ that caters for hikers but, for us, is also a gateway for getting a ride into the nearest town, Mammoth Lakes, by Saturday evening. With only 26 miles to go, we figured we’d take today a bit easier given the amount of climbing today, and aim for about 12 miles, leaving 14 or 15 miles of mostly downhill hiking for Saturday.

The morning was definitely a bit of a slog for me but it was also spectacular. Firstly climbing next to Mono Creek, we eventually reached a junction which our GPS app told us to cross via a log about 100m from the trail rather than the waist deep normal crossing. This turned to be good advice as we managed to stay completely dry.

We then started climbing up quite steeply via switchbacks, eventually coming to waterfall which flowed over the trail. We crossed carefully, the spray cooling us off as we crossed its path. 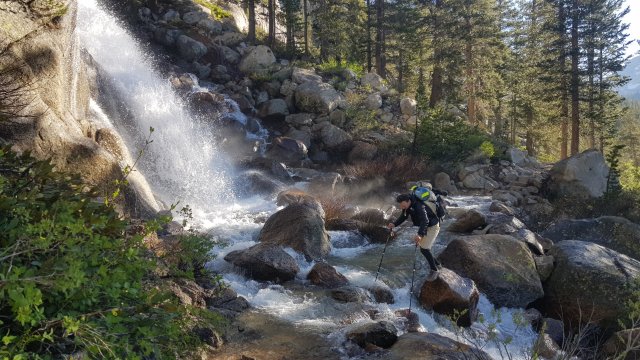 The views started to open up as we got higher, but thankfully not much snow to speak of on this part of the trail.

We made our way slowly towards Silver Pass, the early morning sun hitting us with a lot more force than most days in recent memory. Thankfully the incline was gradual.

We passed a couple of lakes and even spotted a small frog nearby one of the lakes. 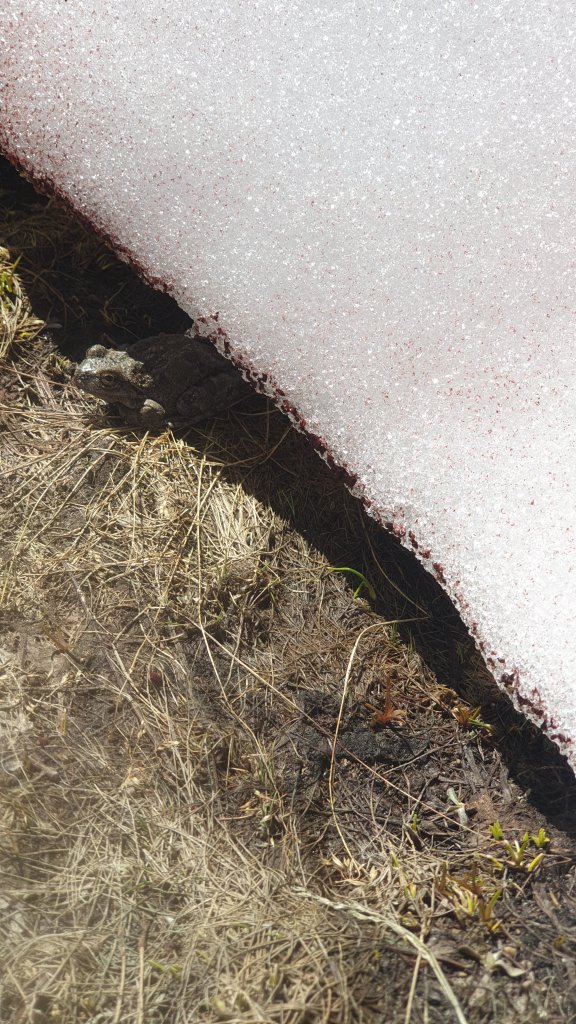 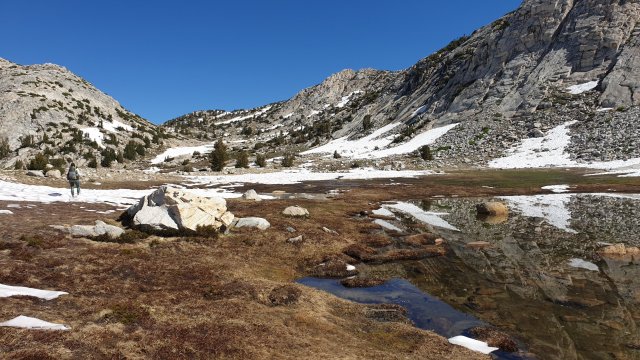 Once we reached the top of the pass, there were amazing views in all directions. It made the 4 hours of climbing to start the day feel worthwhile.

After taking a break at the top of the pass to re-fuel, we set off on the descent, curious to locate the glissading lines that other hikers had mentioned to us in passing over the last day or so. It didn’t take long to find the first one, and they just kept coming after that. 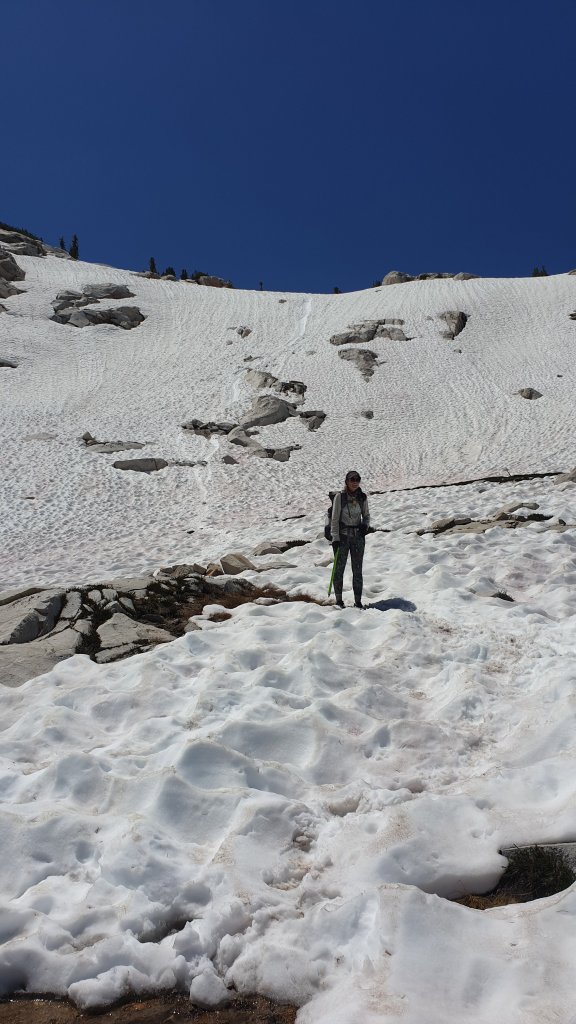 We made the most of every opportunity to glissade (ie. sliding on your bum), as it is easy and quicker to get down the mountain, as long as the path is safe. Thanks to glissading we were off the snow in next to no time, before continuing our descent down the trail to another creek crossing. This time it was bridged though, which given the ferocity of the rapids below, was probably a good thing.

Following lunch, we started our second climb of the day, up to our planned campsite near Lake Virginia. 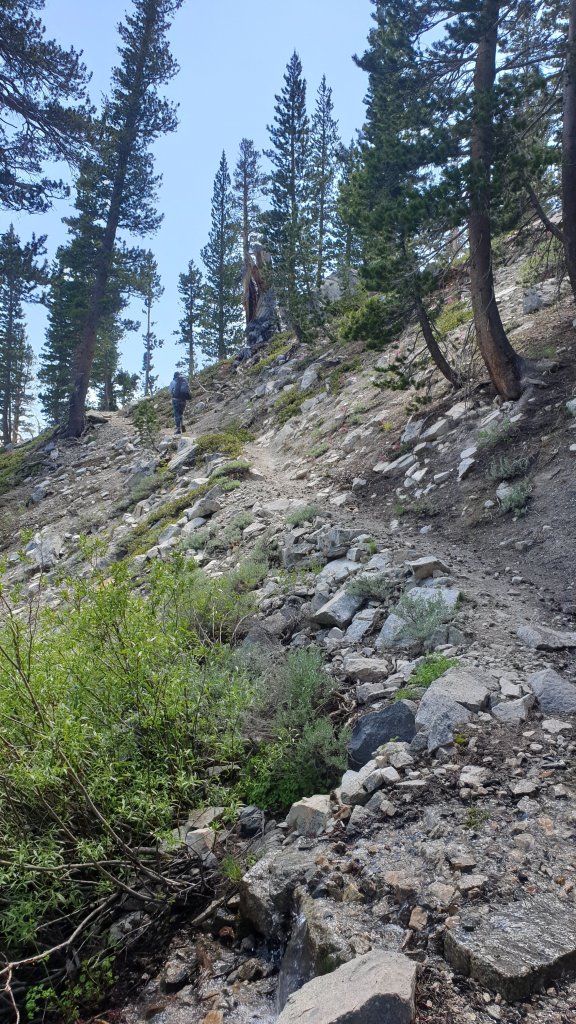 In the hottest part of the day, this was a fairly punishing climb, but luckily it was over much more quickly than our morning climb.

Once we reached the top of the hill, we made our way around the edges of the stunning Lake Virginia, settling on a campsite overlooking the lake at the shockingly early time of 3:45pm. Plenty of time to relax, dry wet gear and have an early night. 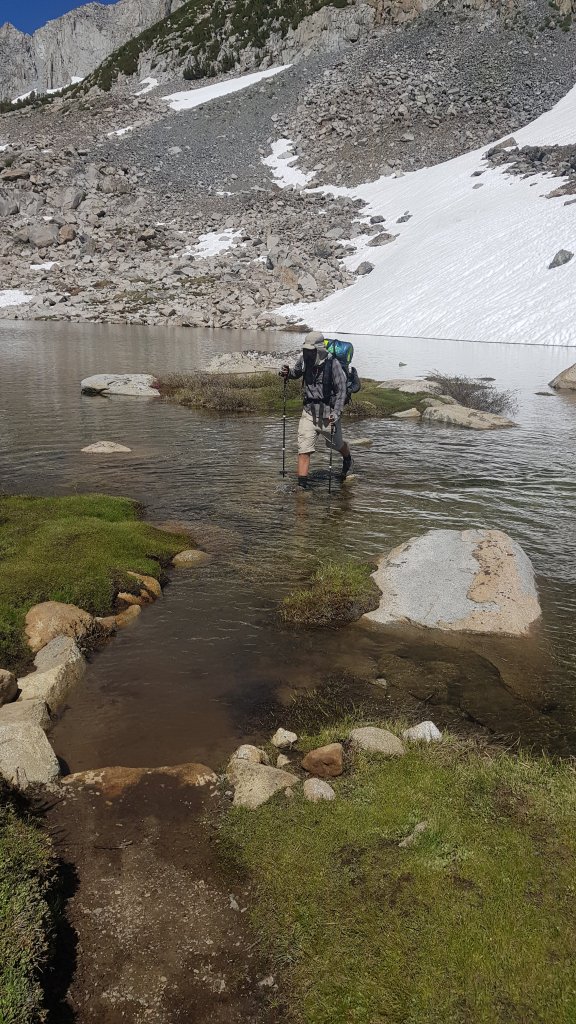 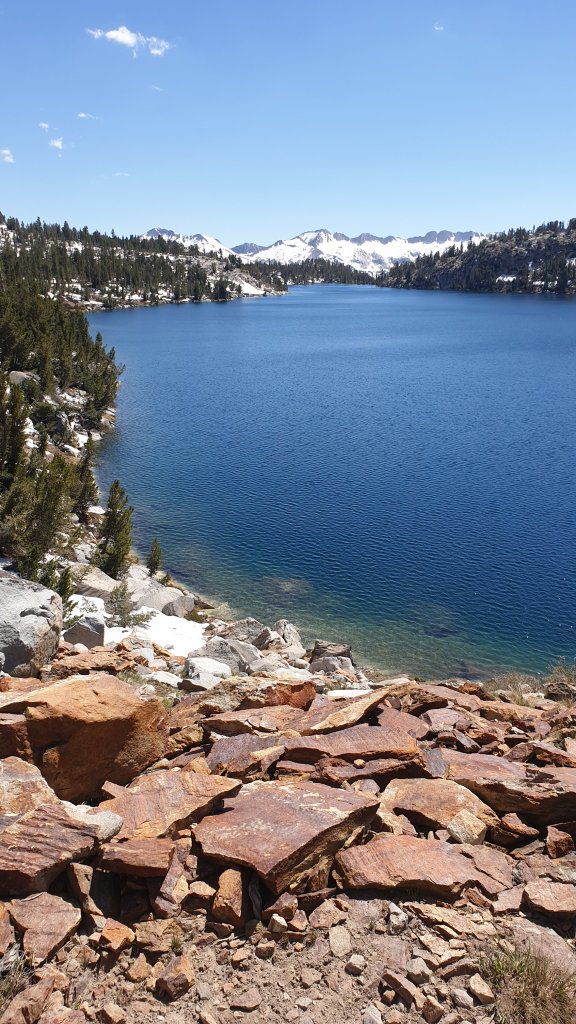 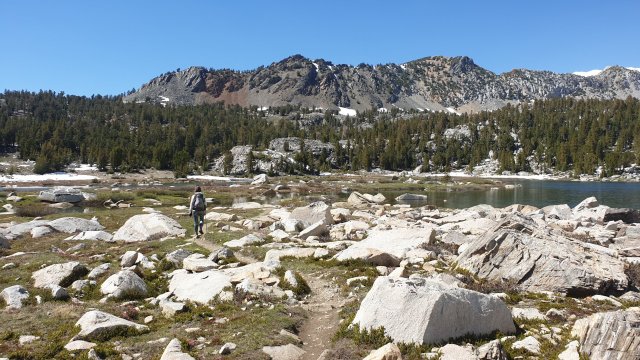 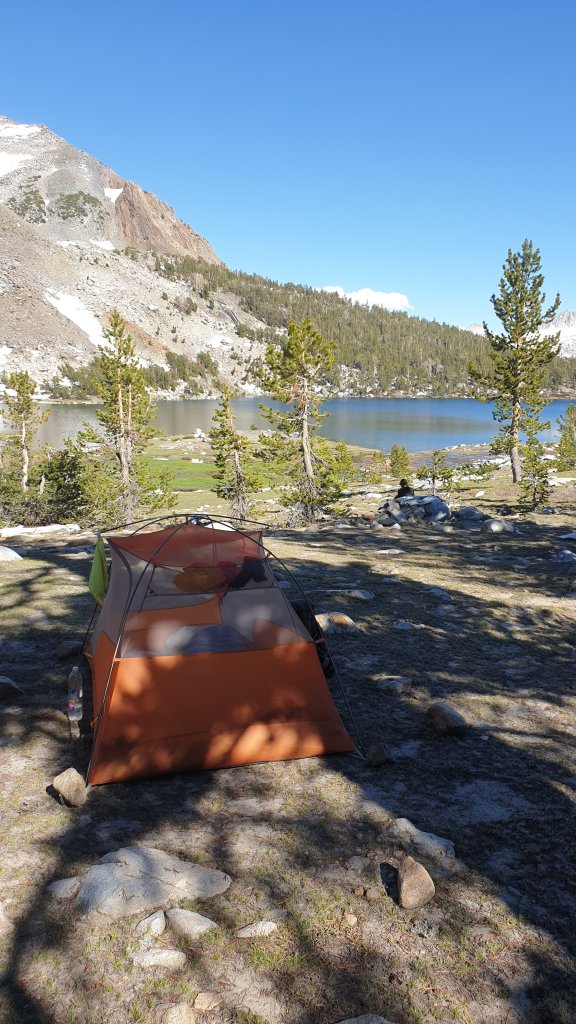 Today was all about getting into Reds Meadow, where a shower, ice cream sandwich and burger awaits. After another week on the trail, we were looking forward to a few small luxuries at Reds Meadow, before catching the bus into Mammoth Lakes the following day.

The plan was pretty simple – walk 15 miles and get into Reds Meadow before the general store and cafe closed at 7pm.

We were on trail shortly after 8am, thankfully the sun had already appeared to warm us up as we walked. It wasn’t long before we arrived at Purple Lake, which Leigh tells me wasn’t actually purple. As I’m colour blind, I’ll have to take her word for it. 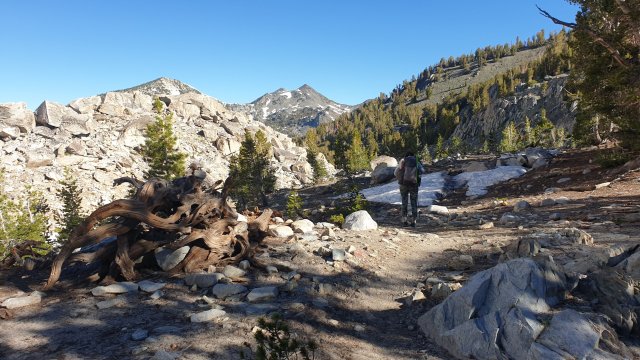 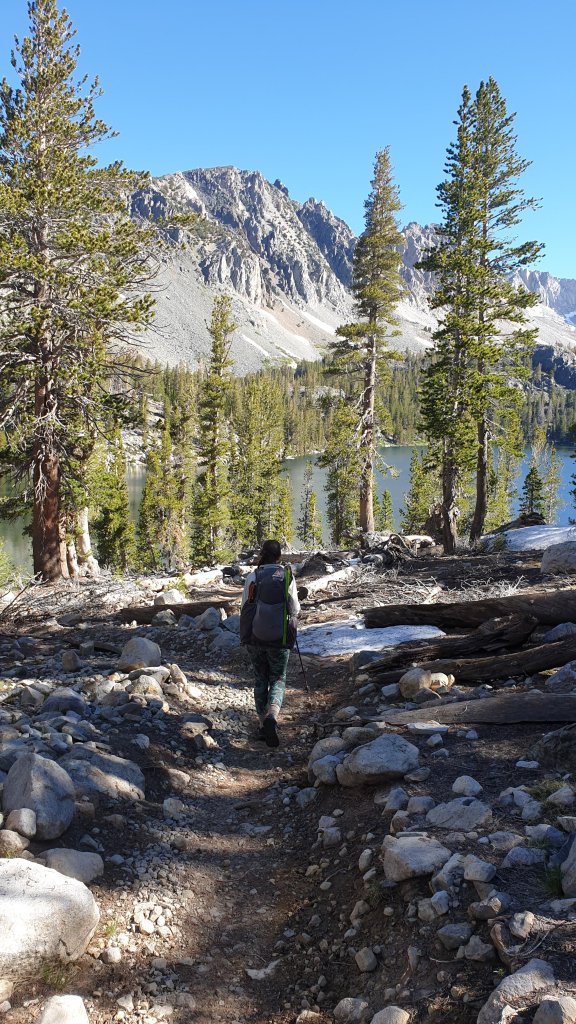 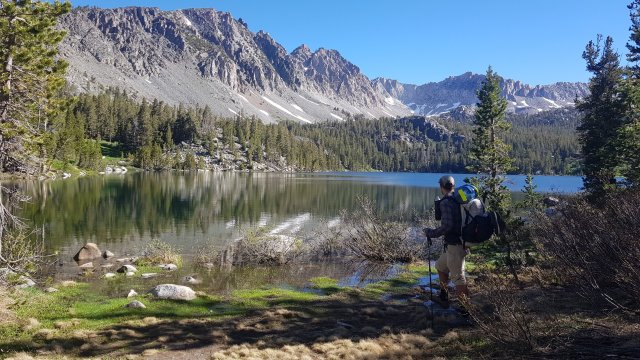 We then climbed about 500ft, which was the extent of the climbing that we would be doing today. It felt great knowing that it was all flat trail or downhill for the rest of the day. 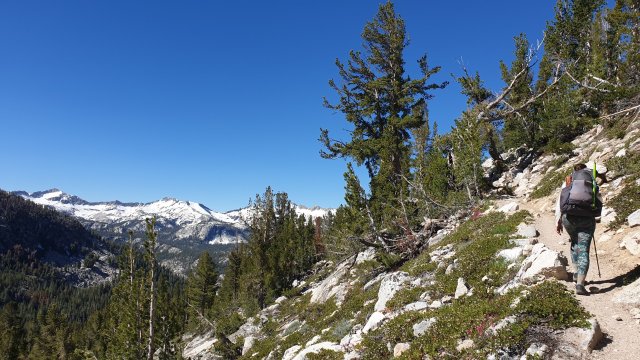 The rest of the day from about 11am absolutely flew by. We were doing close to 3 miles per hour for much of it as the snow free, flat trail made for easy forward progress. I guess this it what hiking the PCT is supposed to be like in a year that is not an abnormally high snow year! 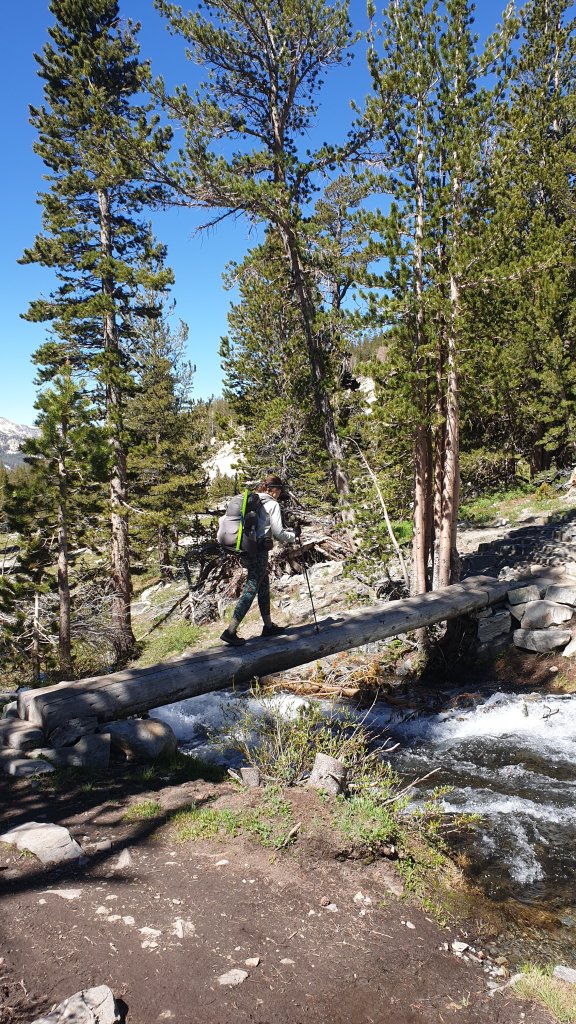 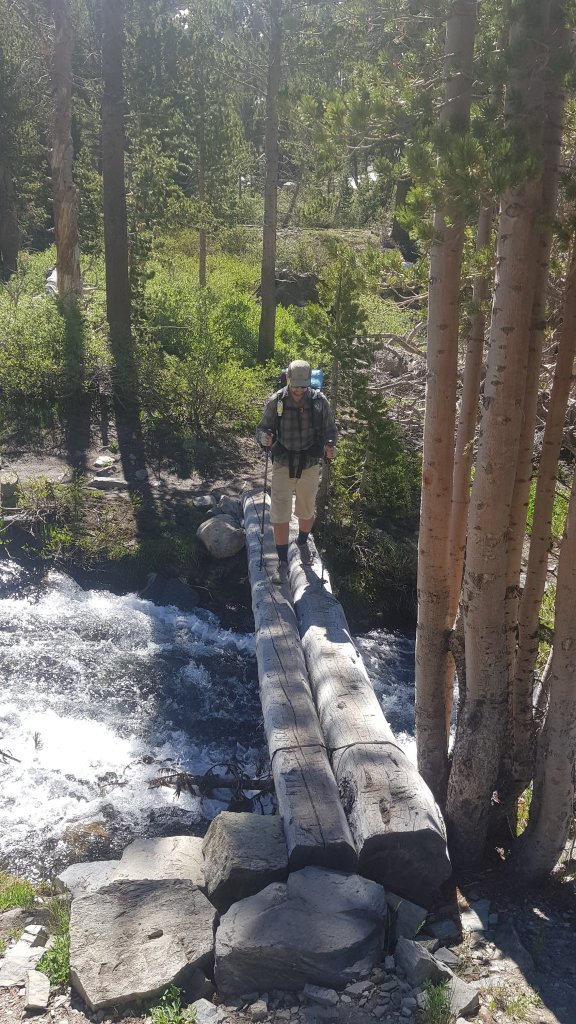 We passed the 900 mile marker and stopped for lunch about 4 miles from Reds Meadow. Leigh decided to get creative and mix liquid peanut butter with trail mix for her wraps. 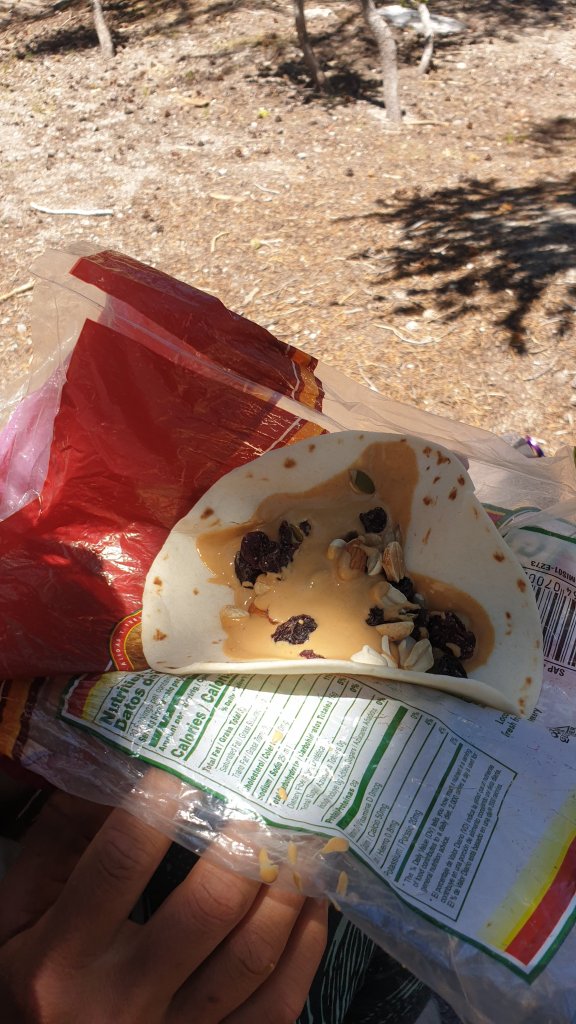 Hiking does weird things to you…

We powered on after lunch to reach Reds Meadow by mid afternoon. Leigh almost acquired a new trail name along the way, as a passing hiker commented enthusiastically “sweet pants” to Leigh as he passed us on the trail. Unfortunately I couldn’t convince Leigh that this was better than her current trail name, Stacks. 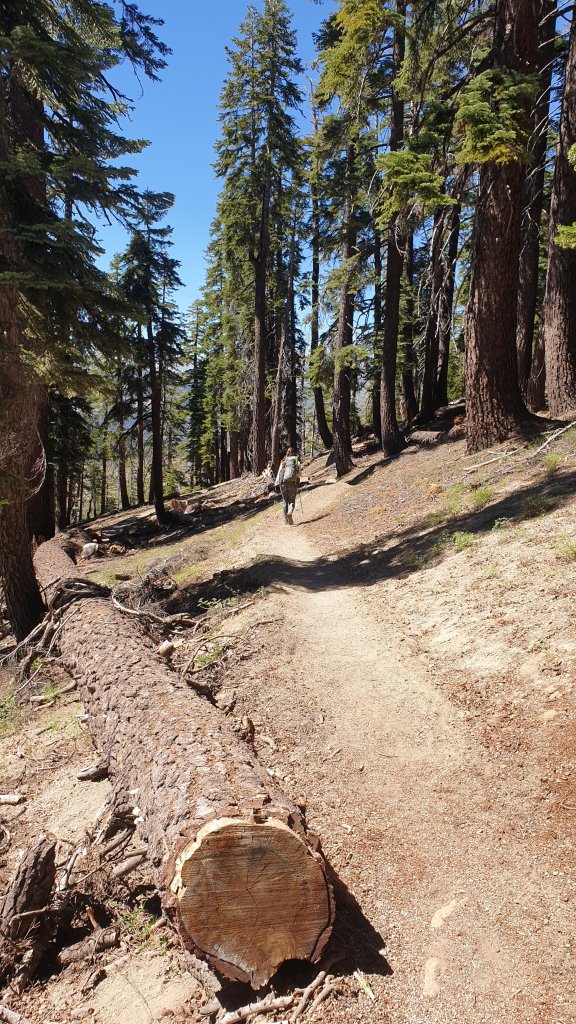 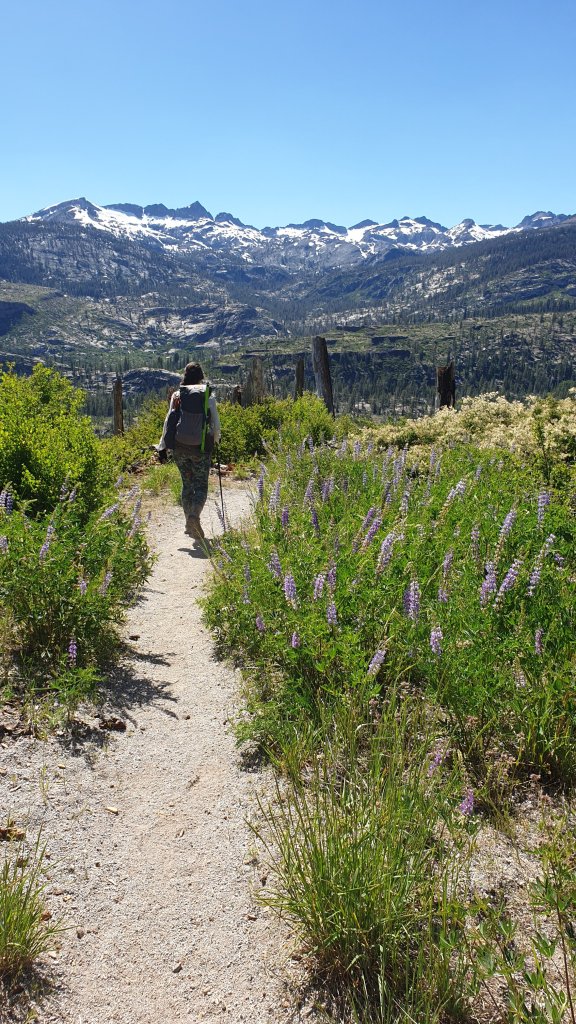 The staff were really helpful at Reds Meadow, allowing us to camp for free in their closed campground and getting us sorted with showers and laundry. 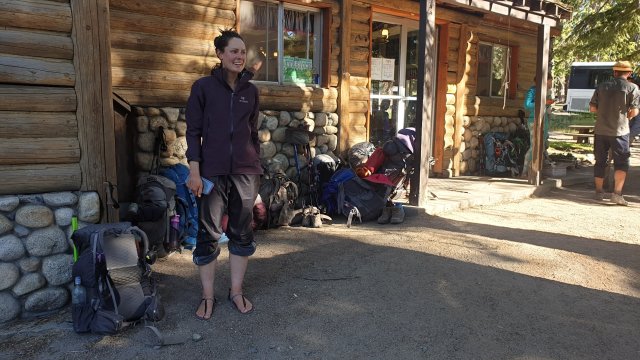 We finished of the day with burgers in the nearby cafe, opting for sides of potato salad and pasta salad curiously, rather than fries or salad. Can’t say I’ve ever mixed those combinations before. Followed it up with a piece of pie with ice cream. Looking forward to hitting a real town tomorrow.

We were up at 7am this morning to catch the bus from Red’s Meadow to Mammoth mountain, and then from Mammoth ski and mountain bike park to Mammoth Lakes village. It was interesting to see so many people out skiing and mountain biking when we changed buses at Mammoth given how hit it is at the moment.

Once in Mammoth Lakes, we headed straight to Good Life Cafe for a late breakfast before checking in to our hostel. Next on the list was to scope out the nearby supermarkets and organise our food for the next section of trail. Mammoth Lakes has an awesome free town trolley which does laps of the town all day and we made good use of it, even though the timetable wasn’t the easiest to understand and definitely caused a few arguments. 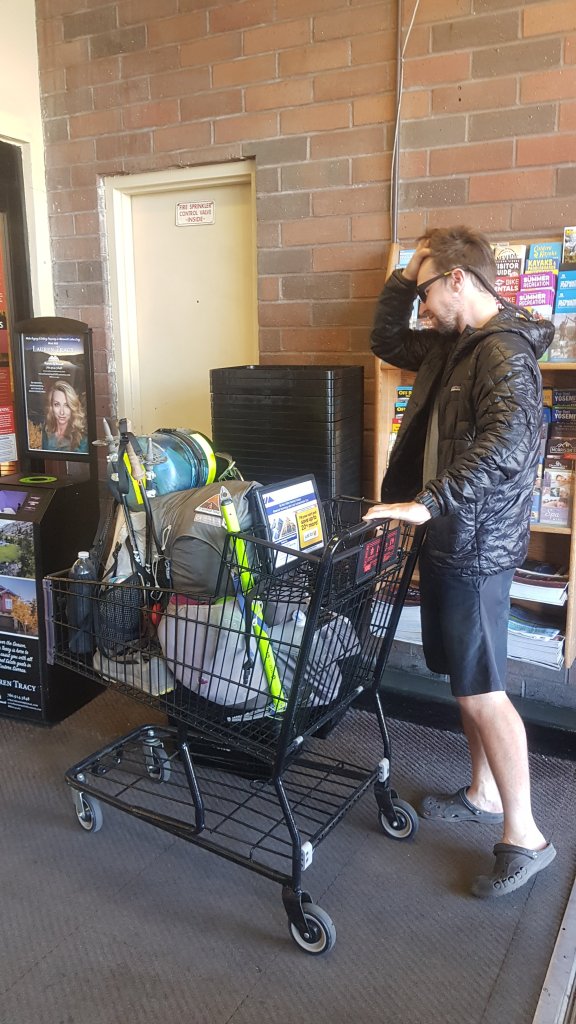 We found a discount supermarket selling $2 tubs of Ben and Jerry’s ice cream, and made sure that we ate our fair share while in town (including one in the nearby car park).

The rest of the evening was spent catching up on messages and touching base with friends and family.

We had a pretty simple plan today – spend most of the day going through photos and entries for the blog at the local library before catching the bus back to Reds Meadow in the evening.

We also started planning ahead for the next section of trail which doesn’t have any nearby supermarkets and organised for a company to ship our food resupply to us in the mail.

Everything was going to plan so we stopped off at Carl’s Junior again for some burgers before catching the town trolley back to the Mammoth Village. It wasn’t until we reached the Village that we realised that while the bus to Reds Meadow would still be running for the next hour or so, the bus that we needed to catch from Mammoth Lakes back to Mammoth mountain had already finished for the day. Rookie error.

We attempted to hitch the first leg of the journey for about 15 minutes but it was already after 6pm by then and we didn’t like our chances of getting a ride as there was hardly any traffic headed in the right direction at that time of day.

We decided to stay in town for another night at the cheapest place we could find at short notice, Motel 6, before catching the first bus to Reds Meadow tomorrow morning at 7:15am.