What a whirlwind of a day! Up and walking by 6:15am, we were able to take in the spectacular sunrise colors in the reflection on a nearby lake on our way to Glen Pass. 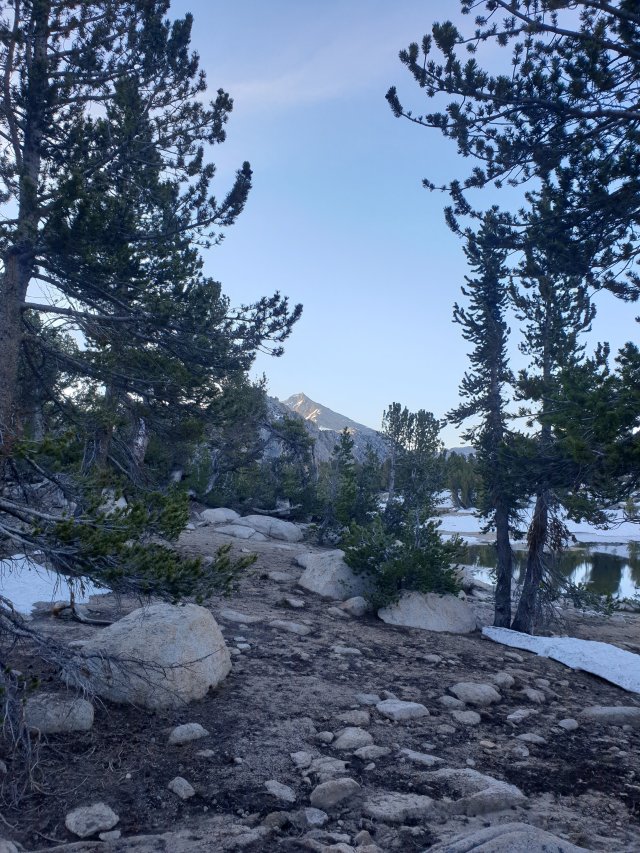 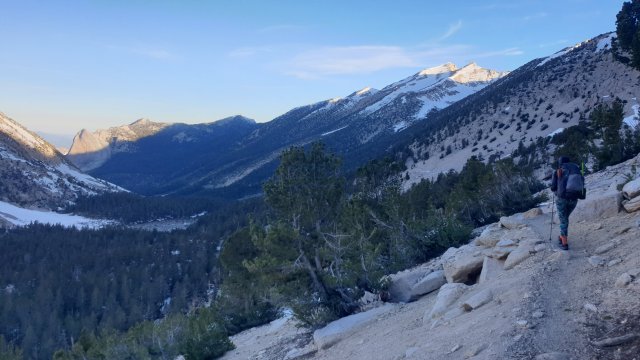 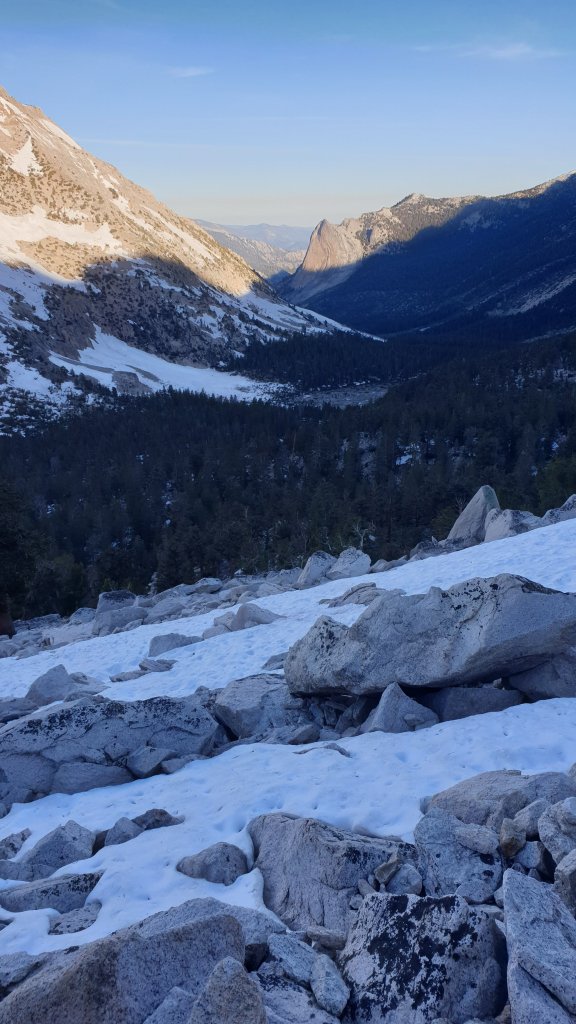 As we got closer to the pass, the amount of snow increased, forcing us to put on our Microspikes for additional traction. It was a beautiful morning, made only more beautiful by the many frozen lakes we were able to pass along the way. 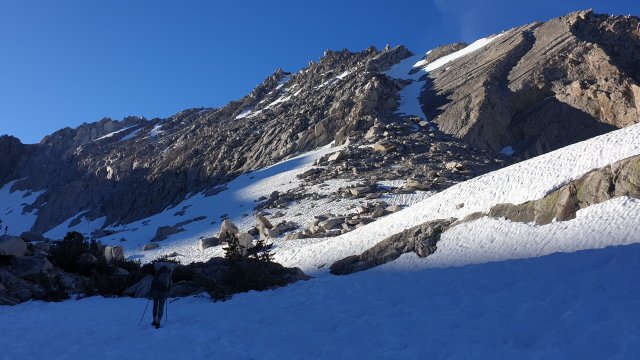 After navigating a few tricky climbing sections, we found ourselves at the top of Glen Pass without too much trouble. The only thing left to do was get down the other side, which would prove much more difficult (and terrifying) than expected. 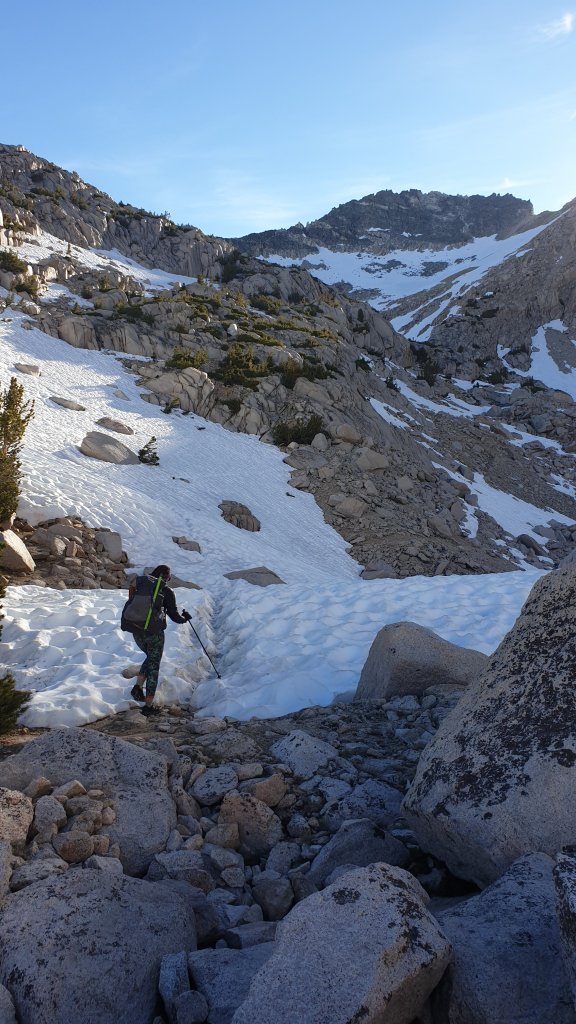 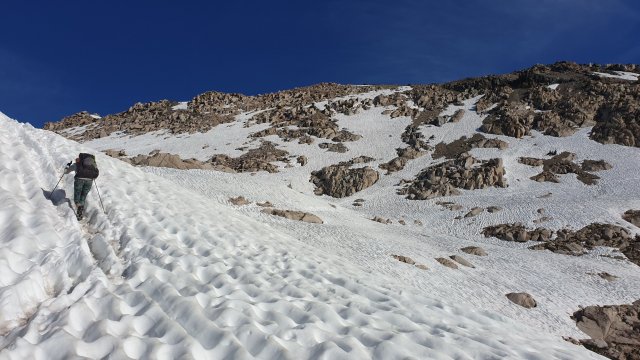 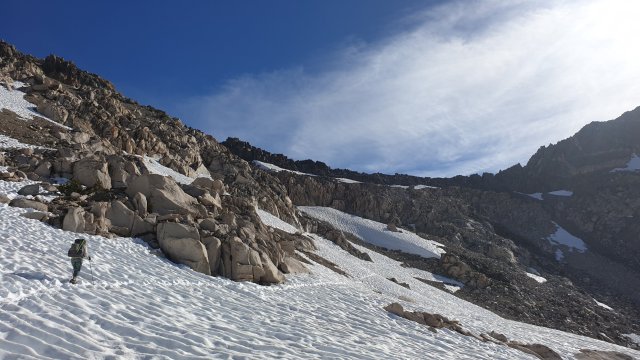 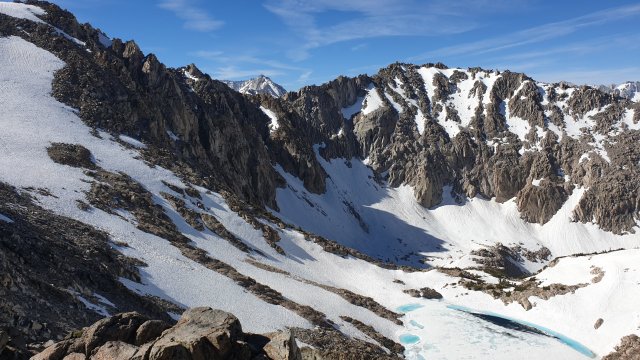 The were a number of different foot tracks through the snow, so we decided to follow the most well used tracks to be safe. We took the first few switchbacks slow but the track then got really steep for the final descent to the bottom of the pass. 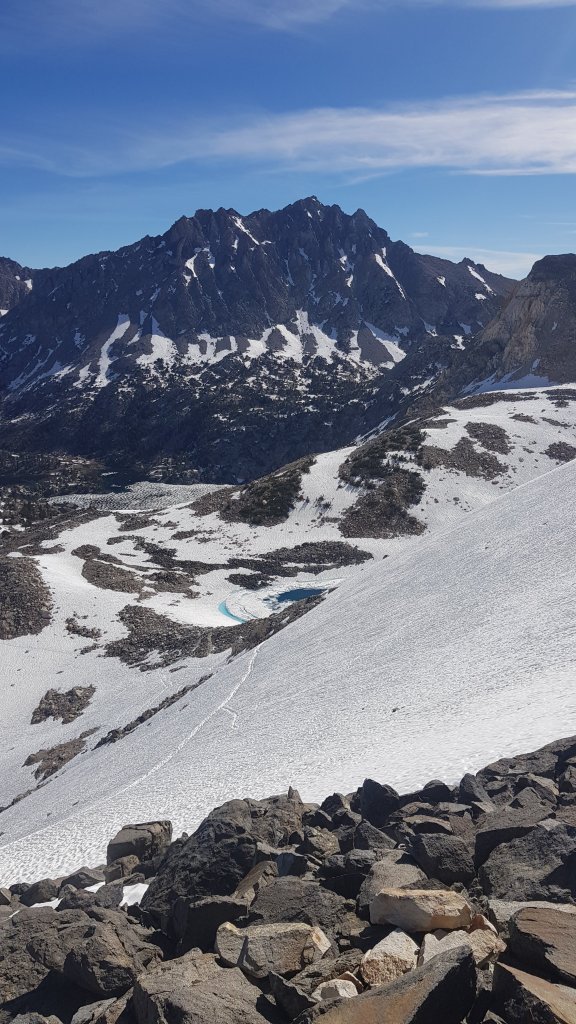 We have to go down there? 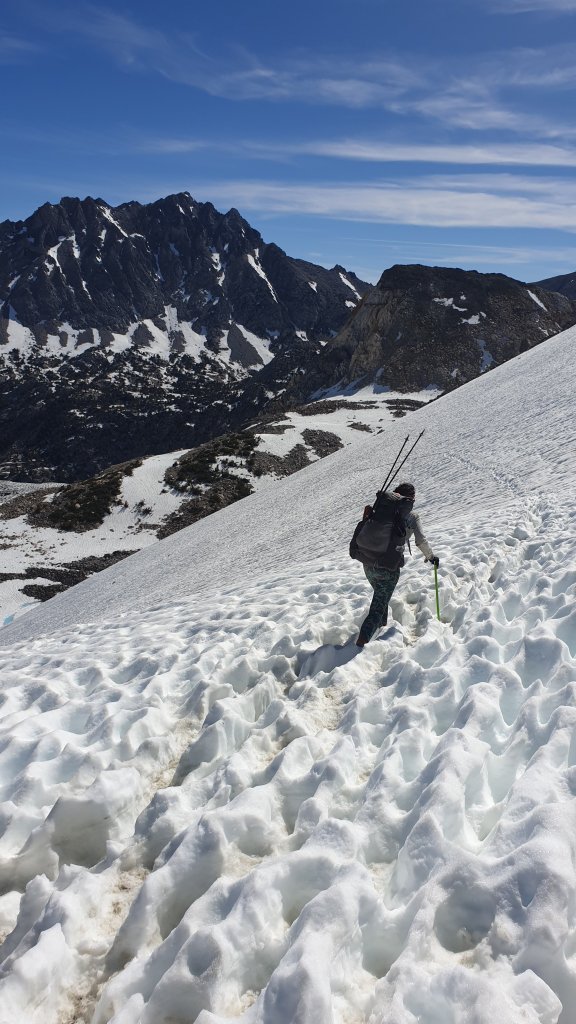 Leigh was pretty terrified of losing her footing and sliding down the slope, so she let me go ahead at one point while she composed herself. No sooner had I switched places with her did I lose my footing on the descent, and ended up having to self arrest three times in a row as I slid on my side, using my ice axe to bring myself to a temporary stop. Nothing like learning how to use an ice axe for the first time than by real world experience. I was overly confident and not wearing my gloves at the time too, which resulted in some minor skin loss from my knuckles attributed to sliding on the ice. Other than that though, I got off pretty lightly.

Leigh made it down in one piece and we sat for a while at the bottom of the slope watching others attempting the same descent. When we eventually left, we ran in to the local park ranger who told us that he estimated 60% of people who take the same route that we did have some kind of slip or fall on their way down. Apparently someone fell and broke their ribs the day before on the same section. He was on his way up the mountain to establish a new safe track for the current snow levels.

Yep, looks just as dangerous from the bottom…

With that excitement behind us, we had a relatively easy day of downhill hiking. First winding our way along that magnificent Rae Lakes, the frozen surface making them look all the more impressive. 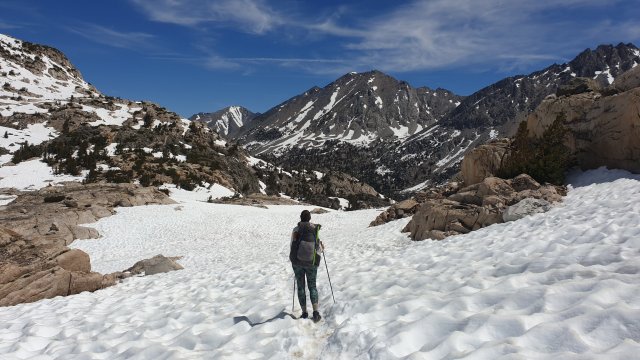 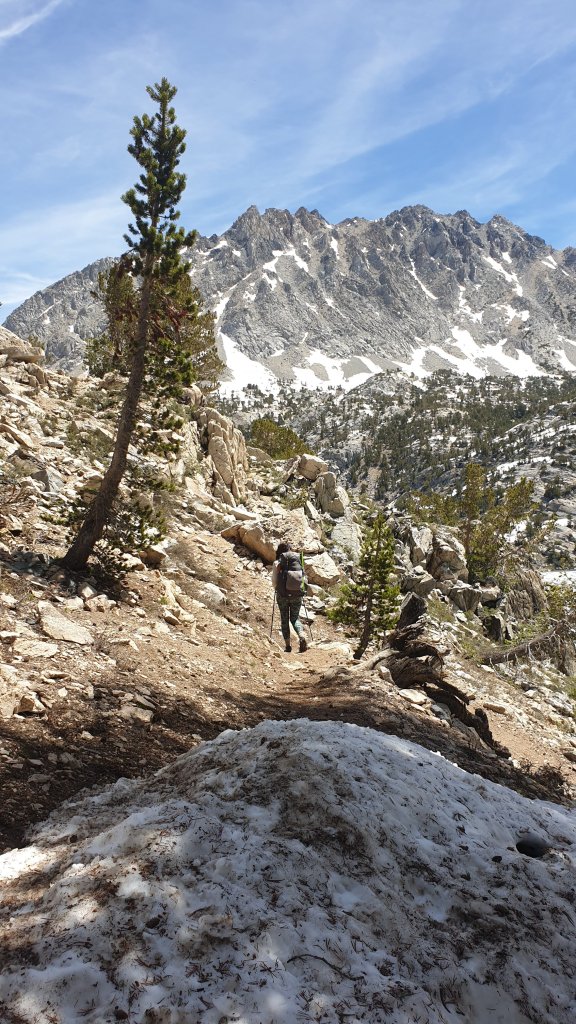 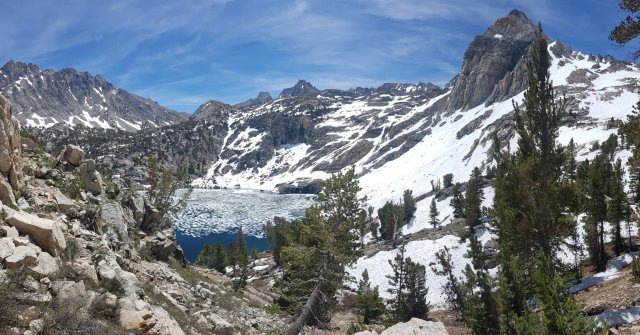 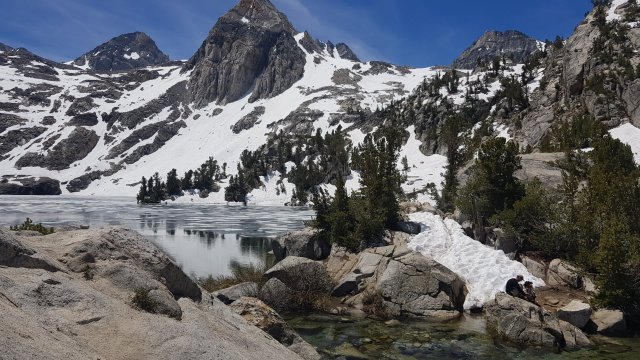 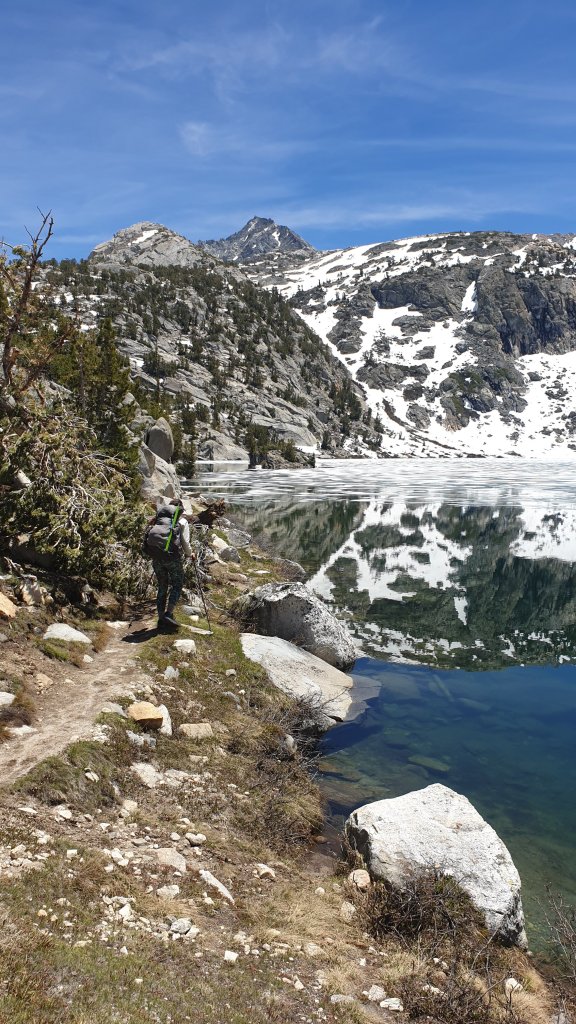 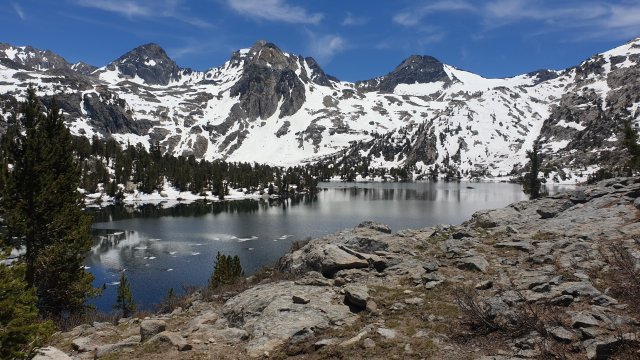 From the shores of the lake, the trail continued to wind it’s way down through a Yosemite-like landscape, with stunning granite mountains in front of us.

I unexpectedly started to develop small welts on my hands, which were annoying as they were super sensitive whenever anything touched them. Not yet sure whether these are heat related, cold related or allergy related but will need to keep an eye on them for the next few days before we get to Bishop. 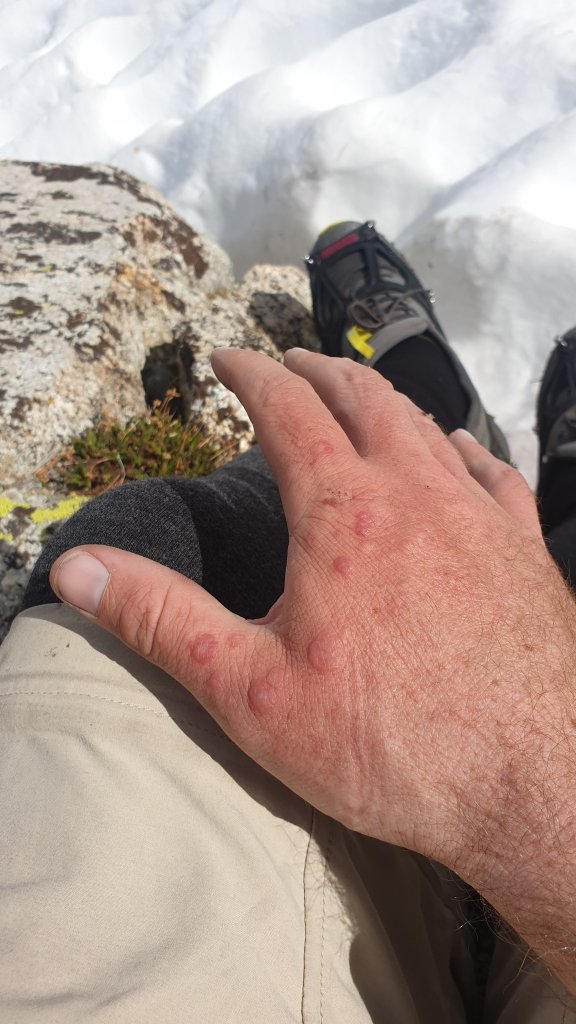 We had a few more creek crossings later in the day, the last of which required 10 people and a piece of rope to get across safely after much contemplation.

After crossing the river (and passing the 800 mile mark), we hiked on until sunset to get within 5 miles of Pinchot Pass, which we will be tackling tomorrow morning. 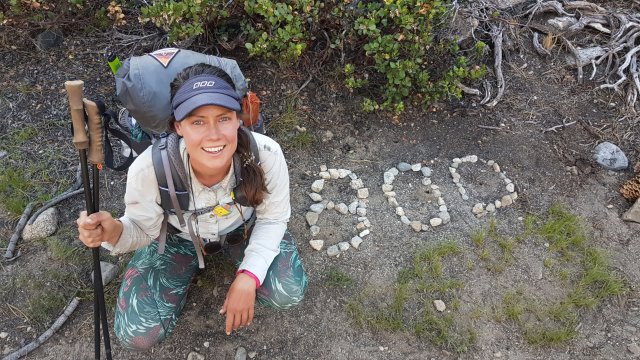 It was a 4am alarm this morning and on the trail just after 5am, in an attempt to reach Pinchot Pass before the snow got too soft.

I may have already mentioned that I don’t enjoy walking before the sun is up as it is cold as and dark. Today was no exception. We walked with headtorches on for the first half an hour before the sun started to shine through. 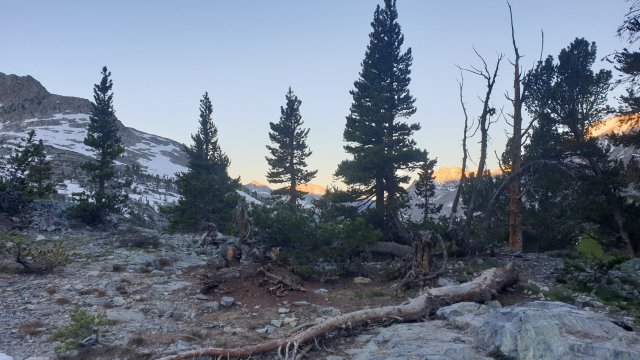 There was a lot of snow on the approach this morning which really sapped the energy from me. It was a beautiful walk though. 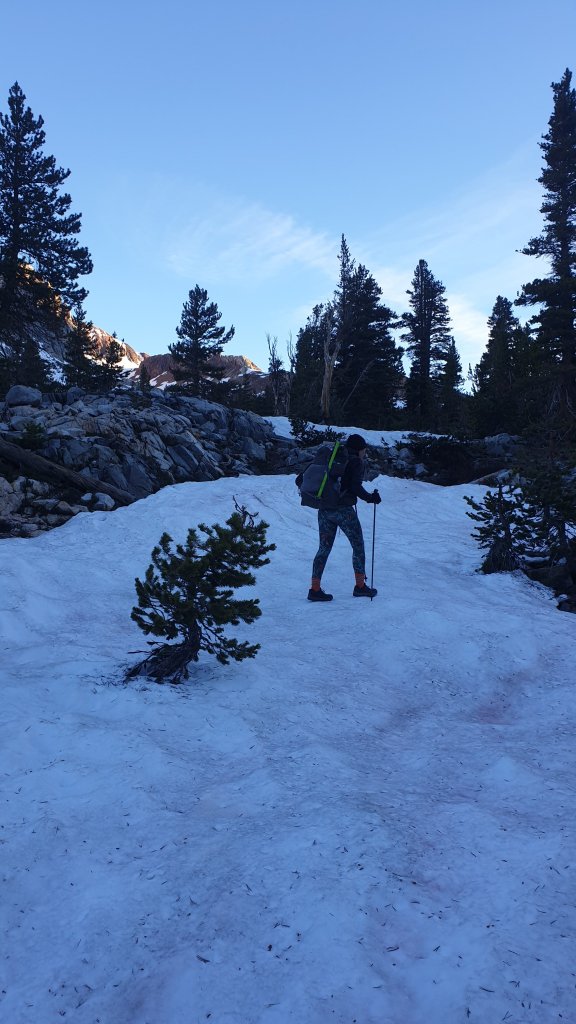 We had been told that the Pinchot Pass was more straightforward than some of the others we have already attempted, and in some respects this was true. The trail was easy to follow and only had a few spots where a slip would ruin your day. 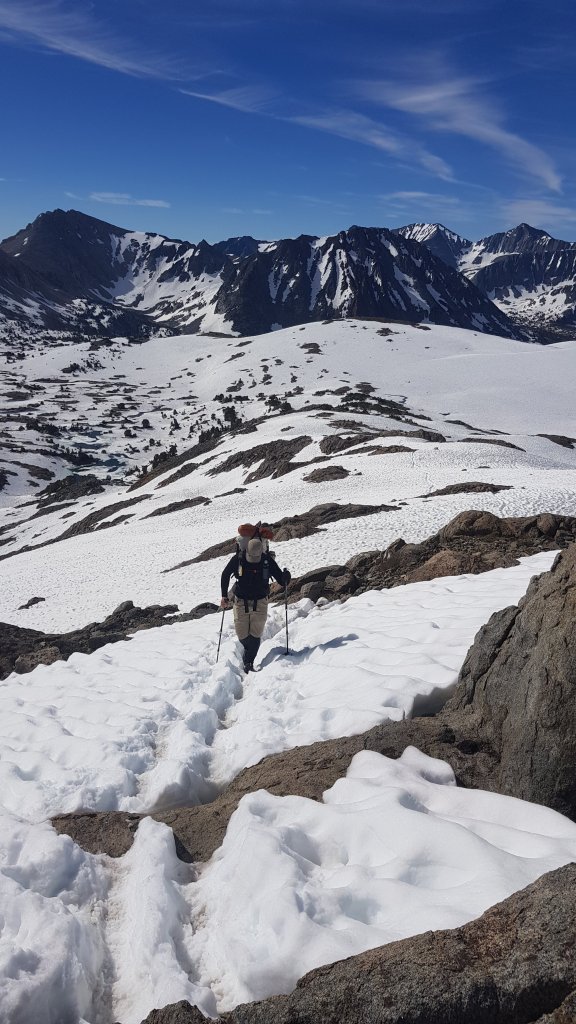 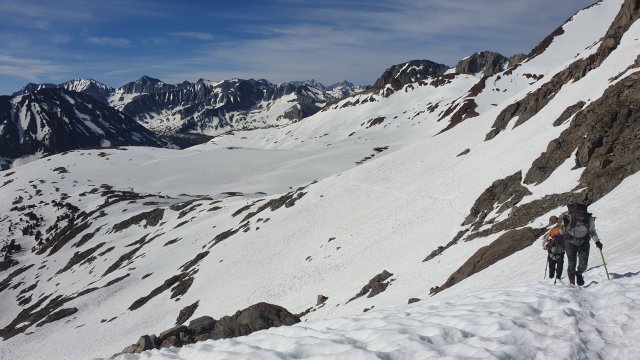 While we were slow on account of my lack of energy today, we both made it to the top in one piece. 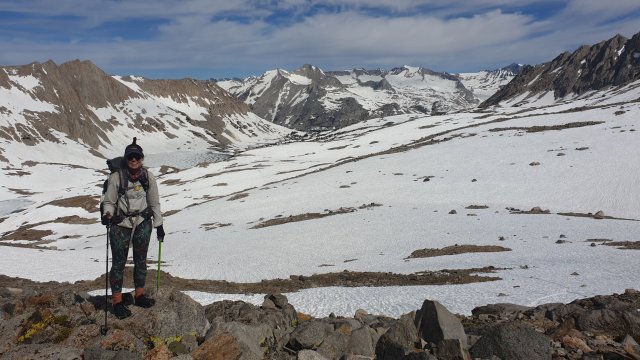 The descent down the other side of the pass was fairly gentle, but man, did it go on forever. It felt like we were walking for hours in the softened snow and had to take multiple breaks along the way. 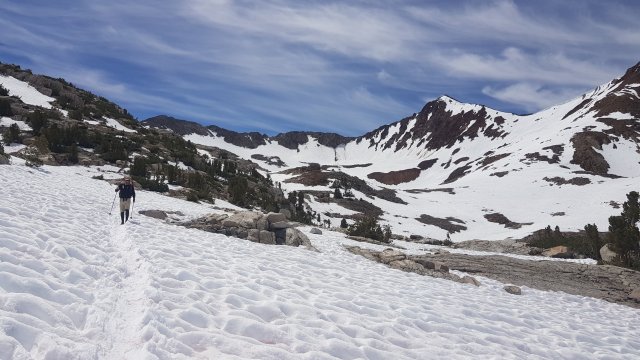 Eventually we reached the bottom of the valley and had a few rivers to cross before we could start hiking up to Mather Pass, which we would be tackling tomorrow.

The approach was snow covered but beautiful. We were grateful for the footprints through the snow made by other hikers as it made the frequent postholing on the afternoon snow bearable as we knew that some of our steps would still be good on the compacted footprints. 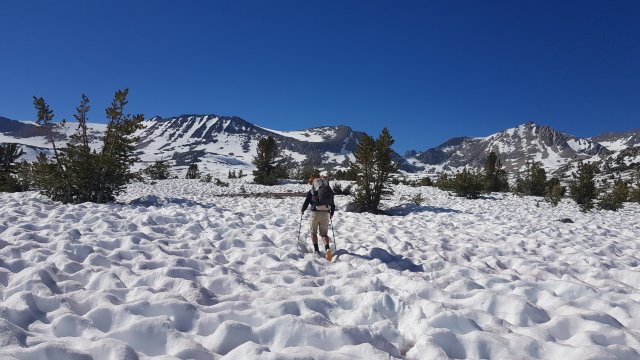 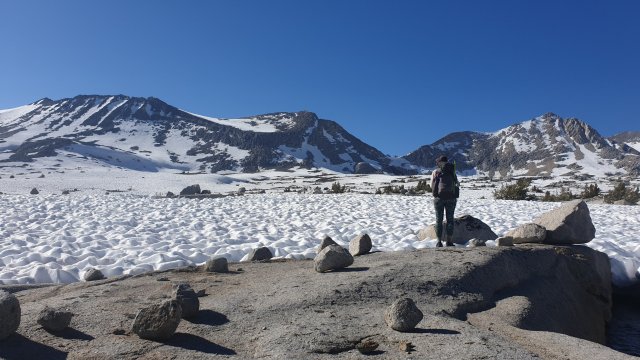 We finally reached our campsite at the base of Mather Pass, on a nice dirt island shared with a few other hikers. No sooner had we set up our tent and put our wet shoes and socks out to dry did the sun disappear behind the surrounding mountains, leaving us with the prospect of wet feet to start the morning tomorrow, which is not ideal.

This looks like a particularly sketchy pass from the bottom with a couple of different routes to choose from. Hopefully it is nice to us.