We had another lazy morning today while I’m still acclimatising to the altitude, but it was undoubtedly a better night’s sleep for me compared to my first night on trail. The water levels in nearby Rock Creek didn’t appear to have dropped much overnight, so we stuck with the original plan of crossing directly opposite the campground rather than mucking around trying to find an alternate crossing point. In any case, the depth or speed of the water did not look overly dangerous from the banks.

We broke camp at about 8:30am and dipped our toes in the icy creek. It turned out to be a bit deeper than expected, coming up above our knees and wetting the bottom of my shorts. It was a fairly straightforward crossing through, with no real issues.

Once on the other side of the creek, the trail began to climb. First steeply, before a more gentle slope later on. After getting down half a breakfast serving of granola, the first part of the climb came and went without too much difficulty for me. The second climb felt like more of a struggle though as my energy levels started to drop.

Upon reaching the top of the second climb, we took a break and watched a cheeky Chipmunk come over to check us out. Not long after finishing our break we ran into Leigh’s friend, Ruben, who was doubling back to Lone Pine after changing his hiking plans.

We were presented with yet more stunning mountain views for the rest of the day.

We had been looking for a spot to practice our ice axe skills but didn’t find any good snow covered slopes until late in the day when Leigh decided to have a go on one spot that we walked passed. Unfortunately the snow was soft by then and not overly conducive to sliding. 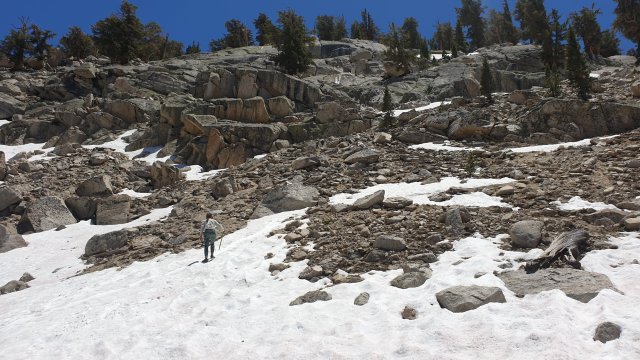 After another shin deep creek crossing, we had our first run in with mosquitoes on our way to the Mt Whitney tent site for PCT’ers. With this year being a high snow year though and the melt underway, the worst is definitely still yet to come as the mosquitoes breed in every bit of stagnant water they can find. 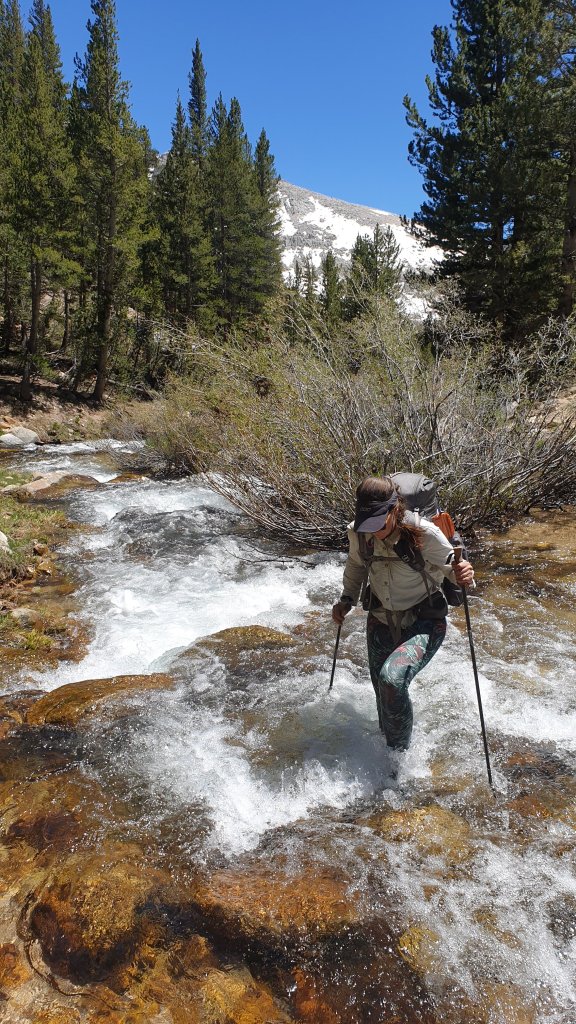 On our way through to our planned campsite for the day, we stopped off at the Crabtree Ranger Station to chat through current Mt Whitney conditions with one of the rangers. We then crossed our last creek of the day before attempting to dry out our wet gear ahead of the planned 2am start tomorrow morning to give us enough time to attempt to summit Mt Whitney before sunrise when the snow conditions get sketchy for your descent. 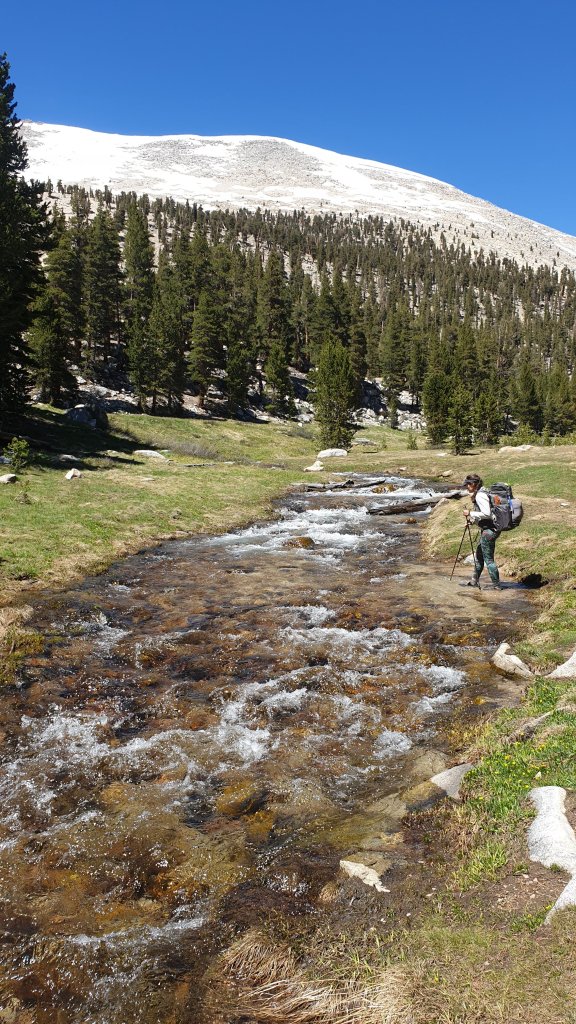 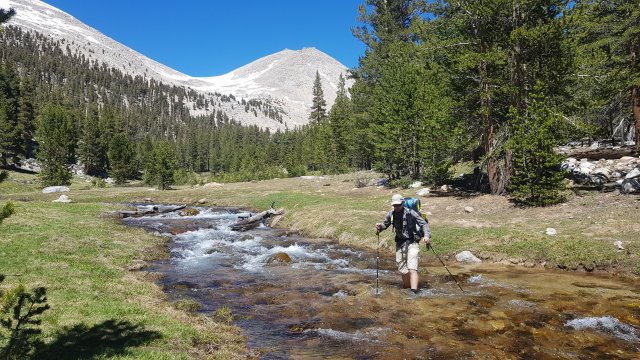 There are probably 30+ people in the campground tonight who are attempting to summit Mt Whitney tomorrow. Everyone is in bed by about 6pm as they try to get some sleep before the early start tomorrow morning.

Our alarm woke us up at 1:30am. The plan for summiting Mt Whitney was to cross the snowy sections of trail before the sun starts to melt and soften the snow. Thankfully, as we would be returning to the campground afterwards our summit attempt, we were able to lighten our packs and leave the excess items behind in our tent.

I didn’t sleep so well. Not sure whether it was the altitude or stressing about how things would go on Mt Whitney but I probably only got 2 hours sleep in total. I also couldn’t force myself to eat anything when we woke up, which was not ideal as I really needed every bit of energy I could muster for the summit attempt.

We headed off into the darkness at 2am, following the beam of light from our head torches. It was an eerie feeling not being able to see anything around you other than a small circle of light.

We made good progress during the first hour on dry trail and had reached the first patches of snow in what seemed like no time. The existing foot tracks were often hard to find in the snow though, so we spent a lot of time checking back to the GPS to make sure we were on track.

As we started to climb, our paced slowed as the increasing altitude kicked my butt again. Even the smallest climb would leave me completely out of breath. I didn’t feel great and started to think that it was not going to be possible for me to get to the summit today. The large sun cups in the snow also made the surface hard to walk on as you had to be careful with your foot placement to avoid falling face first into the hard snow.

As the sun started to rise, I reluctantly made the call that I didn’t feel up to the more challenging section of the climb so we turned around and headed for home instead.

Once we turned around, the early daylight views ahead of us were stunning and we couldn’t believe that we had walked past all of this beauty in the dark. 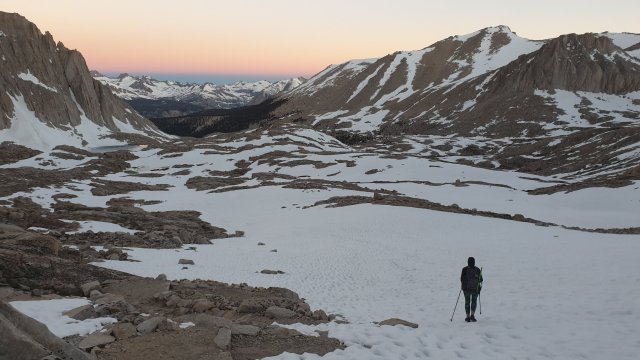 Further along the trail, we saw the sheer power of snow, which appeared to have recently destroyed and knocked down every tree in its path, probably via avalanche. 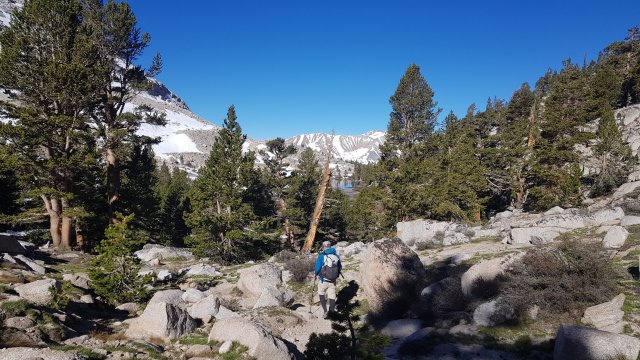 Once we got back to the campsite it was stinking hot and our tent was no longer in the shade, but we were tired so we tried to grab a quick nap. We decided to take it easy for the rest of the day and give me one more day to acclimatise, as we were due to go over the highest point on the PCT, Forester Pass (4,009m), in two day’s time. This would be the crux for me because if I wasn’t up to that climb with my altitude sickness, our only option would be to backtrack all the way to Lone Pine and skip the rest of the Sierra mountains.

We headed back to the PCT trail junction in search of shade and some space from other hikers and set up camp opposite a picturesque stream, complete with possible bear claw marks on a nearby tree. It was a chilled afternoon but the mosquitoes started to come out in force once it cooled down in the early evening.