From my beautiful campsite at the pass I experienced a sunrise as beautiful as yesterday’s sunset, an incredible way to start the day.

From the pass the trail climbed rapidly via a series of switchbacks, winding back and forth up the mountain. The climb was tough but it meant lots of opportunities to pause for a breath and to take in the beautiful views.

The views over the rolling mountains were made even more beautiful by the soft morning light.

Once up to the ridgeline I had views out the Sierras, a glimpse into where I will b e headed in a couple of weeks time. I was informed later in the day that the prominent, snow capped mountain in the distance was Mount Whitney. 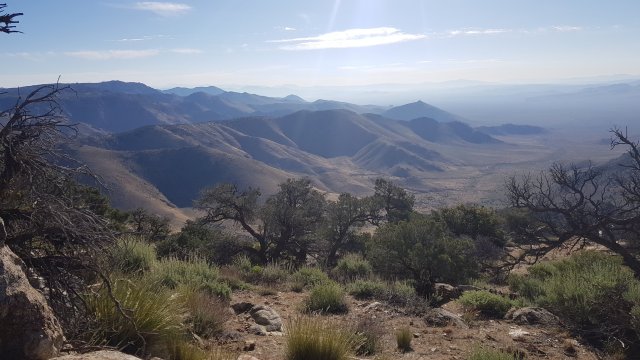 I had a relaxed morning, knowing I wasn’t in any rush having planned a short 13 mile day. I took several morning breaks.

I also enjoyed a nice long break while booking a hotel for Ridgecrest. I decided to take a couple of nights in town given they have reasonable hotel rates, make the most of it while I can. Whilst I was booking the hotel I enjoyed the company of a friendly butterfly which first landed on my leg, then my hand and shoulder. It was so beautiful. I’m not sure why it was so interested in me, maybe it was the salt on my skin. I have been sweating like never before in this section, so much so that I can physically see and feel the salt crystals on my skin when the sweat dries. 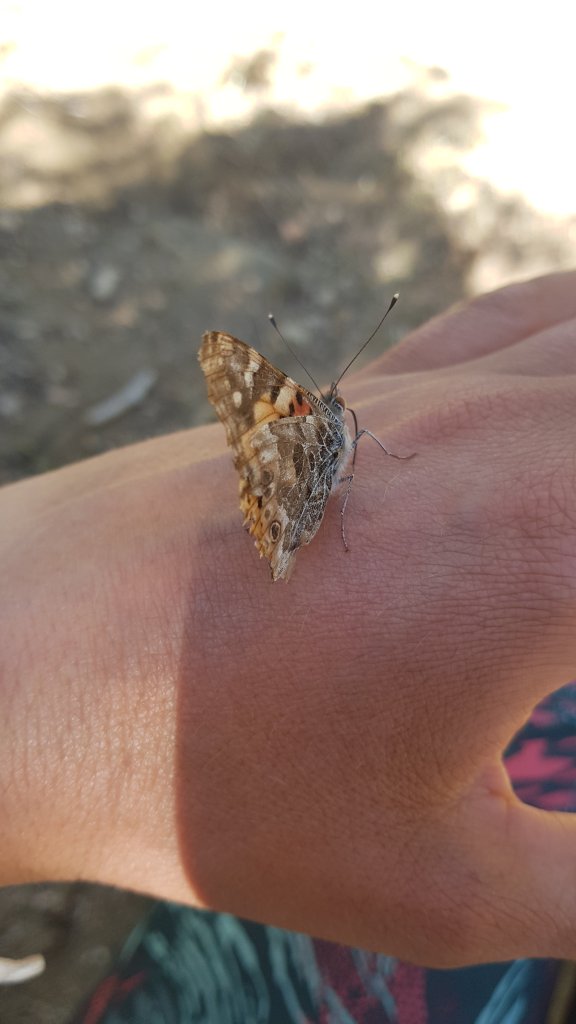 Further down the trail I ran into a group of trail gorillas, volunteer trail maintainers, who were clearing downed trees off the trail. They were being assisted by Jeffery who was helping them move logs and saw through a tree. I chatted to them for a while before continuing on down the trail with Jeff. As we hiked Jeff informed me that the gorillas had mentioned asking a couple of other hikers to help but they declined. I felt shocked, embarrassed and outraged all at the same time. These guys are volunteers who give up their time to improve the trail FOR THE PEOPLE HIKING IT! The level of entitlement is unbelievable. 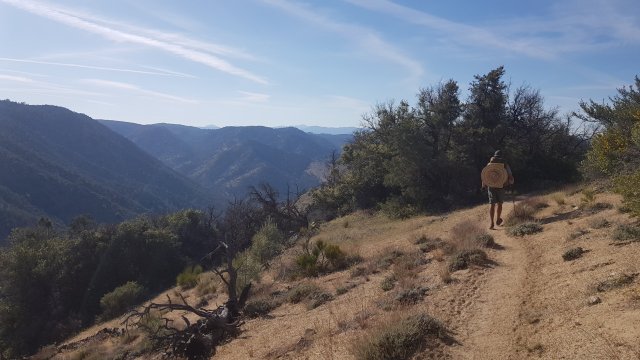 At the start of the day I had planned to do a short 13miles to a Mcilver spring but after booking the hotel I was motivated to get to Walker Pass instead so I could hitch out early the next morning and make the most of the hotel.

After a nice long lunch and water break at the spring I headed back out on the trail around 4pm. There was still a fair amount of heat in the day but it gave me enough daylight to get into camp.

The soft afternoon light made the views even more magical. I took my time getting into camp, enjoying the views and critters along the way.

There was a small group of hikers in camp when I arrived. Some hikers who were on their way out of camp had left pastries and pie for people coming off trail. It was melted and looked incredibly unappealing but was delicious all the same.

Firesox, a hiker I’ve been seeing on and off along the trail greeted me with a gatorade when I came into camp. She had to get off trail a couple of days earlier due to suspected heat stroke so she bought some drinks back to the trail to share with people when she came in.

It was lovely that hikers were doing trail magic for other hikers. I decided that I would bring some treats back from town with me when I get back on trail. 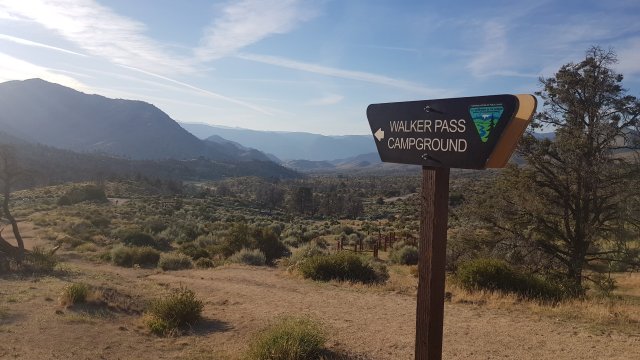 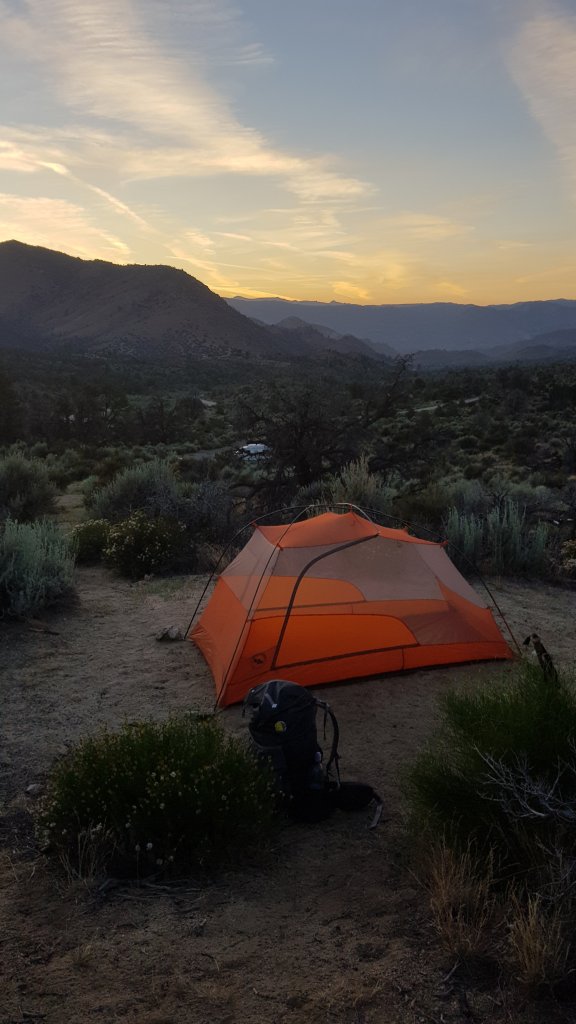 I woke up this morning to the sound of traffic moving along the highway. Walker Pass campground is right beside a main road which makes it great for hitching, not so much for sleeping.

I got up around 6.30 to use the toilets and on my way back to the tent went to say good morning and goodbye to Jeff before he headed back out on trail. He would be going straight through to Kennedy Meadows and wouldn’t be getting out at Walker Pass to resupply. As my luck would have it, a local trail angel, Jalene had arrived to check the water cache and drop a couple of hikers out to the trail head. Not only did she come with hikers but she came with a box of delicious fresh doughnuts and hot coffee. In her words, “hikers are like 6 year olds, they get upset if you don’t bring them something”. She is right, I know my diet is that of a six year old’s at the moment. Sugar has become my staple.

Jalene was giving 2 hikers a ride back into Ridgecrest. I was still in my sleeping clothes and hadn’t packed up my tent at that point but they said they would wait for me if I hurried to pack down my things. The thought of not having to solo hitch into town was a relief so I ran back to my tent, threw on my clothes, stuffed everything in my pack and in under 10 minutes was ready to go. It was a record.

I had previously met one of the guys I was sharing the ride with, ‘The Fonz’, at hiker town. He had walked most of the night and was tired and looking for a hotel. He hadn’t booked anything so ended up staying at the same hotel as I had booked, the Quality Inn.

It was only 7.30am when we arrived into town but they were able to check us in early, once the rooms had been cleaned. Somehow it had come up in conversation in the car that I was yet to experience a Dennys diner so The Fonz was very excited to take me there for breakfast. It was very American and everything I had imagined it to be. After the truly American cultural experience that was Dennys, we headed back to the quality in where our rooms were ready.

It felt so good to shower after such a hot and dusty section of trail. It was even better to do laundry and have a clean set of clothes. The hotel didn’t have loaner clothes as such but they let me rifle through their lost and found. I found a giant t-shirt and a pair of shorts that did the trick, it was way too hot to wear my rain gear today.

My second cultural experience for the day was a trip to Walmart! I would later find out from a local trail angel that Ridgecrest Walmart is the 3 largest Walmart in the world. It is a super Walmart so it has Groceries as well as everything else you would imagine. To me it felt like a Woolworths with a Kmart, chemist and Bunnings attached (minus the Bunnings sausage sizzle).

I went a little overboard on my resupply and although all of the grocery items were cheap I bought a lot of them. It will be enough food to last me the 6 days into Lone Pine. My bag is going to be very heavy for the climb out of Walker Pass!

I relaxed for the rest of the afternoon, watched a movie, took a swim and began forming a plan of attack for the Sierras.

One Comment on “Day 45 & 46 – American hospitality and American culture”