My alarm went off at 5am this morning and I was determined to get to McDonald’s early. It had been raining on and off all night but it had also been super windy so the fly wasn’t too wet while I was packing down the tent. It was extremely cold though.

The walk from the campsite to Cajon Pass wasn’t the most beautiful nor the most pleasant of walks. The wind was gusting and it was cold, rain was spitting down. The trail wound through the hills under a very large set of power lines which buzzed as the rain hit them. I felt like my body was being fried as I walked underneath them.

It was only 6 miles to the McDonald’s turn off, my legs were racing at the thought of hotcakes and coffee so despite the bad weather I made it there quickly.

I didn’t waste any time in ordering and not 15 minutes after I arrived, Jeffrey walked through the doors. What I thought would be an hour or 2 rest at McDonald’s turned into a 4 hour multi-course feast. I had 2 coffees, an egg and cheese mcmuffin, hotcakes, 2 hashbrowns, cinnamon doughnut sticks, an egg and cheese mcgriddle, an apple pie and to top it off a sundae. The sundae may have pushed me close to the edge but it gave me incredible mountain climbing energy.

After hiking the TA people often asked, ‘how much weight did you lose doing that?’ Assuming you must lose a lot of weight walking 3,000km. While Adam lost 12 kgs I didn’t loose a single kg after weighing myself on my return home. How you may wonder? Hiker hunger is how. You become so hungry hiking the trail that trail food doesn’t cut it after a certain point. When you get into town your body goes into overdrive wanting to eat all of the foods you just can’t eat on trail. You mostly crave high calorie foods. I surprised myself just how much I can eat. It’s like there is no off switch. Amounts of food that would normally make me feel sick to think of, I can now eat without thinking twice about it.

Despite the dreary weather outside, I dragged myself out of Maccas and back on the trail. It was nearly 2pm and if I didn’t leave at that point I never would have left.

The carbs, fast, sugar and salt of the McDonald’s feast served me well and I powered through the afternoon. Over the rail lines, through a huge water pipe and back out into the mountains, away from the noise of the highway and back into tranquility.

I was hiking with Jeff. We managed another 12 miles during the afternoon, post McDonalds break. Give we were climbing, covering a 2,500 elevation gain I was surprised at how fast we were able to move. 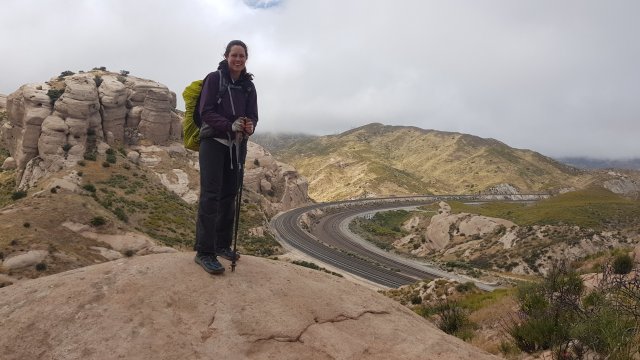 The views from the trail were beautiful, looking across the mountains and over Cajon Pass.

The clouds were moving fast over the mountains, the higher we climbed the thicker the clouds became.

At about 6pm we decided to set up camp and were later joined by an Australian couple, Mahni and Ben who I’d met a few times before on the trail and who we’d spent our 4 hour Maccas break with. We chatted into the evening.

I was a little light on water having misread some comments on Guthooks (my navigation app). There was a water cache before the big hill climb, 6 miles after leaving McDonald’s. Unfortunately the trail angel who restocked the water wrote the comment on the wrong mile marker so I incorrectly assumed there were 2 caches. I had almost 2 litres, enough to see me through until the morning but I decided to eat lunch and snack food for dinner rather than cook with water, just to be on the safe side.

I had a beautiful, lazy start to my morning today. Although the tent was covered in condensation, it was surprisingly warm with the sun breaking through the clouds. I had camped the night with Jeff, Mahni and Ben. With beautiful views from the campsite, the sun streaming down and Ben making coffee, I decided not to rush into the day but to let the tent dry off before I started walking. It was a nice change not to be rushing out on trail trying to walk to warm up from the cold.

It was just after 8am when I started walking. I was glad I had started late because all of the cloud had lifted and I enjoyed incredible views as I walked, back over Cajon Pass where I had came from the day before and across to the snow capped Baden Powell where I will be heading in a couple of days time. 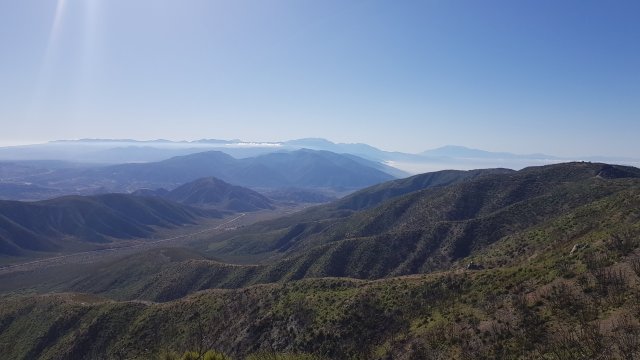 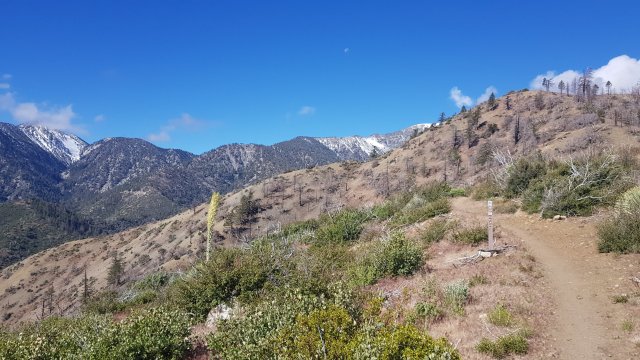 I was looking forward to heading into Wrightwood, knowing I only had 15 miles to walk today, it was a nice relaxed hike even if it was a steady uphill climb.

About an hour into my morning I was surprised to see a California Fire and Rescue helicopter fly towards me. I expected it to go straight by but it kept doing circular laps of the mountain range, flying up and down in elevation. Initially I thought it was doing a rescue nearby but when it kept flying overhead I panicked that my EPIRB may have malfunctioned and it may be looking for me! After 30 minutes of it flying about I decided that it was probably just doing some practice maneuvers and put in my headphones to ignore it.

The hiking was spectacular today, one of my favorite days on trail. Probably second to the day of snow I had coming out of Big Bear. As I climbed in elevation the views of Baden Powell became cleared and patches of snow began to appear around the trail in front of me. 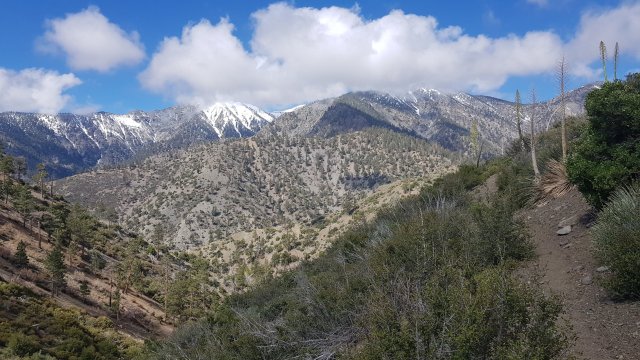 The air temperature dropped and I needed to add a layer of warm clothing as I gained height. The pine trees were all still covered in snow and ice but the morning sun was beginning to melt the frost and water and icicles fell from the trees as I hiked. 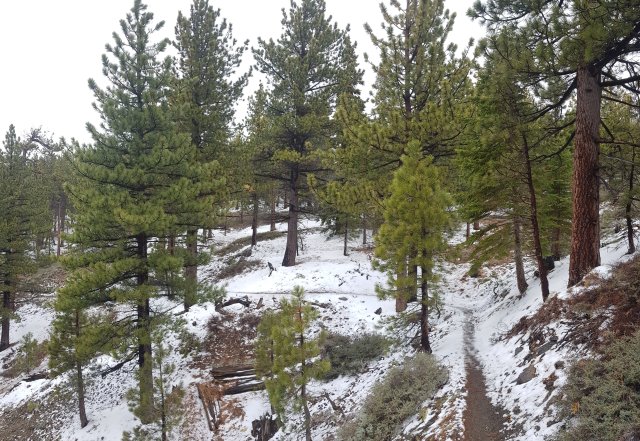 I made it to Guffys campsite at lunch. I had a relaxing hour long lunch break. I was short on water but feeling too lazy to take the side trail down to the nearby spring so I opted to melt some snow for water instead. It was another first time thing for me. There have been so many on this trail! 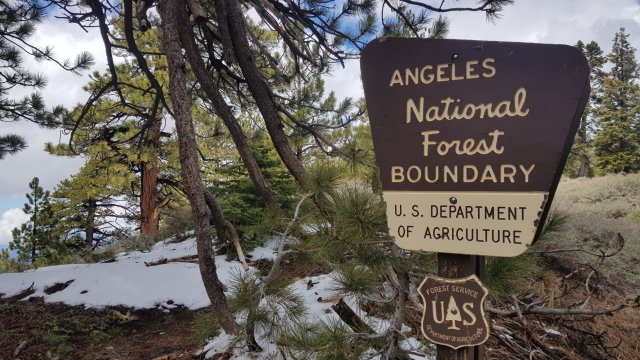 After an hour break and no sight of my hiking companions I decided to keep moving. It was after 1pm and I wanted to make it into town before the post office closed at 5pm.

As the trail continued the trees thinned out a little and I had great views over the city below. It amazes me that this wilderness is so close to the bustling city of LA. 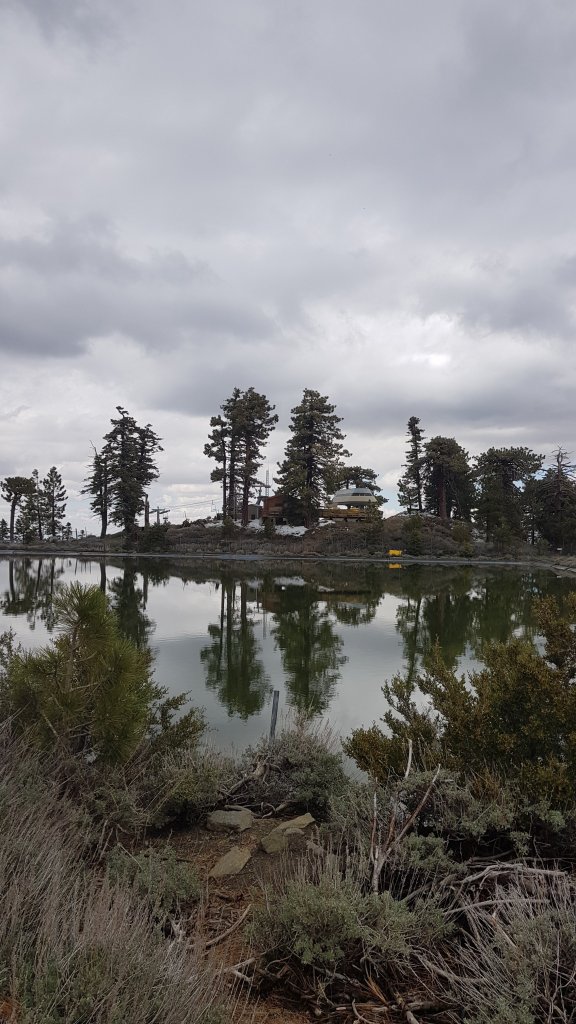 The area I was walking through is a popular ski resort. I passed by a few sets of chair lifts before the trail began to descend down to highway level.

When I reached the road end 3 more hikers were only minutes behind me and joined me in my attempts to flag down a ride. I was irritated at first, it’s a common courtesy to let whoever was at the road first flag down a hitch first but it worked out fine in the end. A lovely LA local who was camping in the area stopped and gave us all a ride. He said he had a great day of people helping him with some problems so he decided to pay it forward. It was very kind of him. Getting into town so quickly was such a great help for us!

I headed straight to the post office to pick up my bounce box. After all the cold weather we have been getting I pulled out my fleece, gloves and some ginger tea I had stashed in there. I also retrieved my printed maps for the next 400 or so miles up to Kennedy Meadows. It made me realise how fast my time on this trail is going.

While I was at the post office Jeff walked in. He wasn’t far behind me on the trail at all. I got a text from Mahni and Ben about accomodation in town, they were keen to share something for the night. After we finished at the post office, Jeff and I walked across the the hardware store. Not the usual first stop for a hiker when you arrive into town but Wrightwood is not your ordinary town. They are extremely hiker friendly!

The local hardware store has a register where hikers are encouraged to sign in. They also give you a beautiful PCT pin which I have already attached to my pack. They hold packages, have a hiker box, charging station and a place where hikers can leave their bags or just hang out. It is incredibly generous of them and makes arriving into town a whole lot easier. The hardware store also maintains a register of trail angels for the local area, people who are willing to host hikers for a small donation. We didn’t have a place to stay yet so I started calling the names on the list. I initially went for the ones who specified they had a dog and then, when I had no luck decided to work backwards on the list.

We hit the jackpot with Kyle and Kate, they are new to hosting hikers as of a week ago. They moved to Wrightwood a year and a half ago into a beautiful log cabin looking over the valley and town. Kyle picked us up in town in his Porche and we immediately realised we might not be in for staying with any ordinary trail angels. Their house was absolutely beautiful and they had a beautiful husky to match. Kye, the dog was an added bonus. We were all in heaven, hot showers, laundry, snacks and CBD mocktails! It was a lovely relaxed evening. It’s going to be tough to only spend one night. 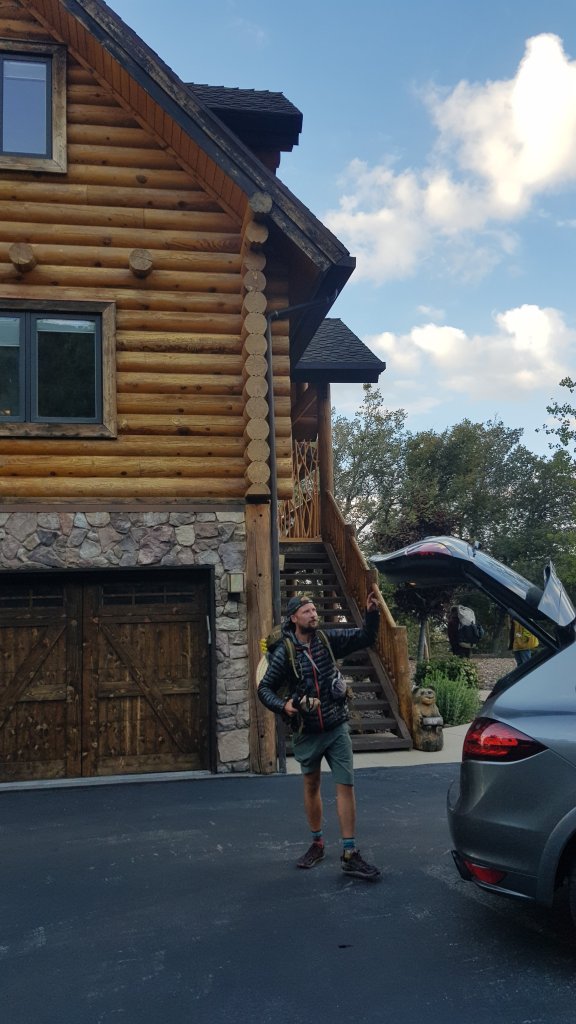 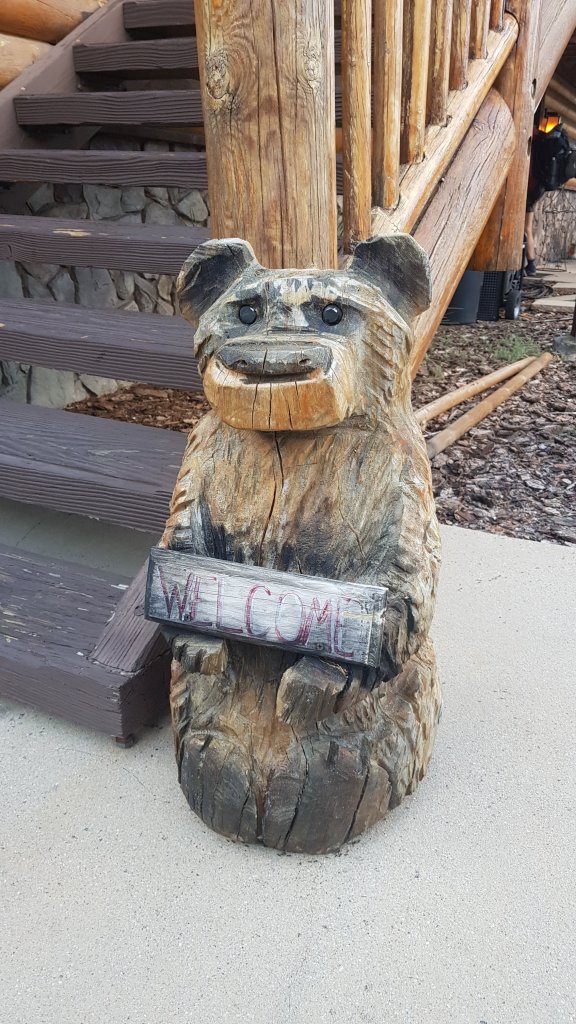