When I got up this morning I was so glad I had made the decision to push through to the wind farm yesterday afternoon. At 6am when the crew arrived for work I was directed into their break room where I was able to use the toilets, charge my phone and best of all, enjoy a morning coffee. The staff who work there are super friendly and accommodating.

We hikers must be a massive disruption to their day. One of the guys even offered us cake from his birthday a few days earlier. As if it couldn’t get any better I spent most of the hour I was there patting the office dog who practically threw herself in my lap. She rubbed her head all over me, it may have had something to do with my smell. 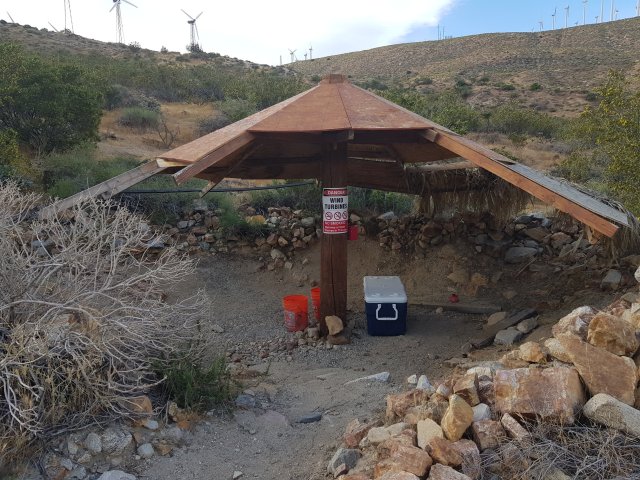 I was off on the trail at around 7.30am and was worried the late start would mean a super hot day hiking in the sun but surprisingly the temperature had dropped somewhat from yesterday. There was a bit of cloud coverage and a breeze blowing as I departed the Wind farm and climbed my way up to the San Gorgonio Wilderness. I was surrounded by picturesque views in all directions, San Jacinto behind me and San Gorgonio in front of me. 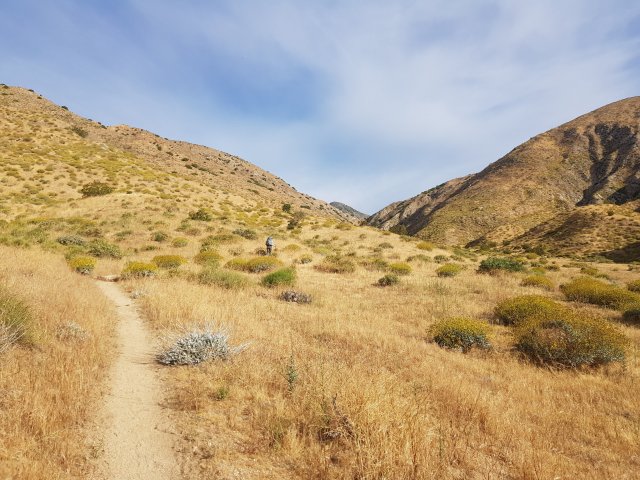 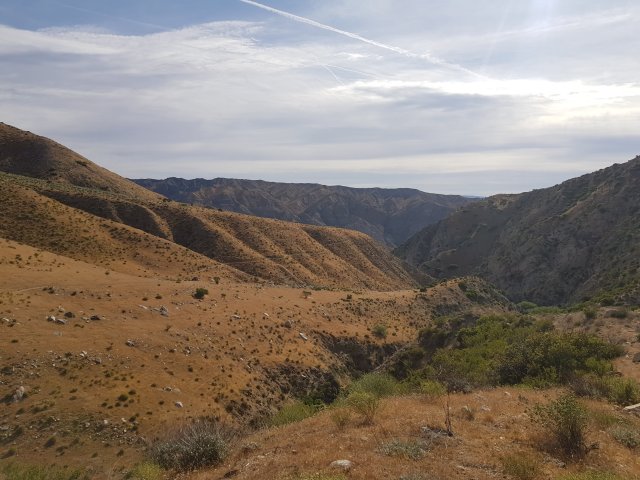 It was around 7 miles from Mesa to the whitewater river. When I saw the river begin to appear in front of me it felt like an apparition appearing in the middle of the desert. I was eager to get down from the mountains and into the water.

There would be many river crossings throughout the afternoon but the Whitewater river was definitely the largest. I took the opportunity to jump in for a dip. Fully clothed I was hoping to achieve 2 things, a bit of a freshen up and a cool down for the next stretch of hiking.

After crossing Whitewater it was back up into the mountains for a short but spectacular stretch. The trail was lined with plants which reminded me of wattle bushes. For a minute I thought I was in the Australian outback with the orange sand and bright yellow flowers. 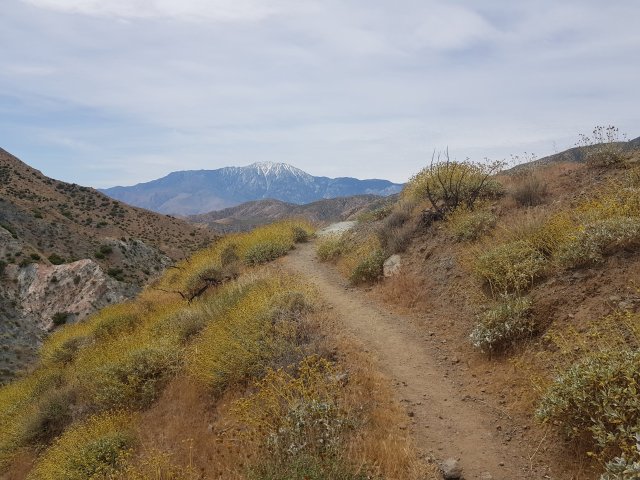 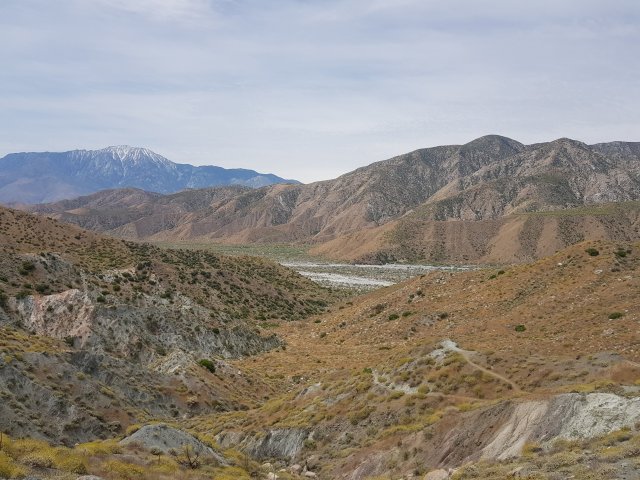 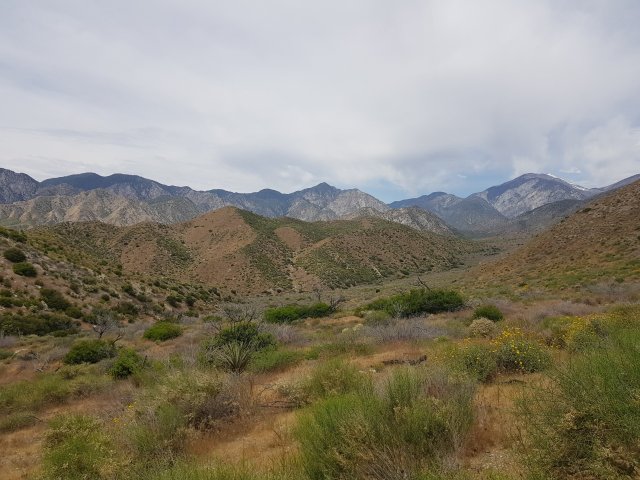 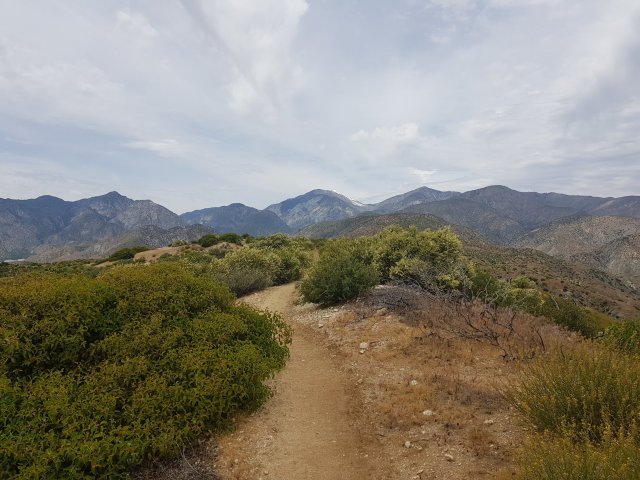 The trail dropped back down once again and I spent the afternoon crisscrossing back and forth over mission creek. The trail was washed out in parts due to flooding earlier in the year. At times it made the trail hard to find. There were several occasions where I frustratingly followed wrong footsteps and ended trudging up the river bed for unnecessary stretches of time. Despite the washout I was extremely happy to have such close access to water. It made it a much easier afternoon of hiking, not needing to carry so much on me and being able to cool off whenever I started to feel the heat.

I arrived at the campsite I was aiming for earlier than expected. It was only 5.30pm so there was plenty of daylight left and it was only 3.5 miles to the next campsite. Going further today would also mean an easier days walking tomorrow. I decided to push on. It ended up being my biggest day on trail yet, walking 22 miles (35km) in total. It felt good to have made it that far.
Thursday 16 May 2019
Day: 18
Location: Mile 235.4 to Arrastre Trail Camp (Mile 256.2)
Distance travelled: 20.8 miles / 33 km

Today was an uncomfortable day from the get go. I hadn’t slept well overnight. A wind had picked up and the tent fly was flapping about all night. I was too lazy to get out of bed and take it off but I probably should have.

There was no easing into the morning. From the spot where I camped the trail headed on a steep incline up into the mountains. My legs felt heavy and I felt out of breath and sluggish. After only an hour of walking I stopped for a break, thinking a sugar hit would do the trick. It wasn’t until another hiker passed me and stopped for a chat that I realised what it was, on top of the big day I did yesterday I was now at a significant altitude, hiking at nearly 9,000 feet. It made me feel better about feeling so sluggish and I decided to take it easy for the rest of the day.

It was a chilly and dreary morning. It had been forecast for rain and potentially snow. As the morning wore on and I climbed in elevation the temperature grew colder and the winds grew stronger. By mid morning it started to spit rain. At the point it started raining the sun was still out so I continued hiking in my shirt, not bothering with my rain jacket.

By lunch time the rain had turned into tiny beads of ice. I’m not sure if it was sleet, tiny hail or snow but it was painful when it hit my face. The wind picked up and was gusting. There was nothing to do but walk through it and hope that the campsite I was aiming for for the evening was somewhat protected from the wind because it was galeforce.

I was walking through pretty pine forest for the most of the day, it was picturesque but I felt like I was battling the wind and cold too much to enjoy it.

Throughout the day I had spotted deer, a hare, a couple of chipmunks and some incredibly pretty birds which kept my spirits up.

I passed many other hikers during the day. For the first two weeks of the trail I had mostly seen the same groups of people on the trail, leap frogging over each other sometimes not seeing each other for days at a time but over the last couple of days I have been seeing completely new faces. I think it is a combination of the two towns we have passed through, injuries and initial trail families slowly breaking apart as people start to find their own groove and pace on the trail. 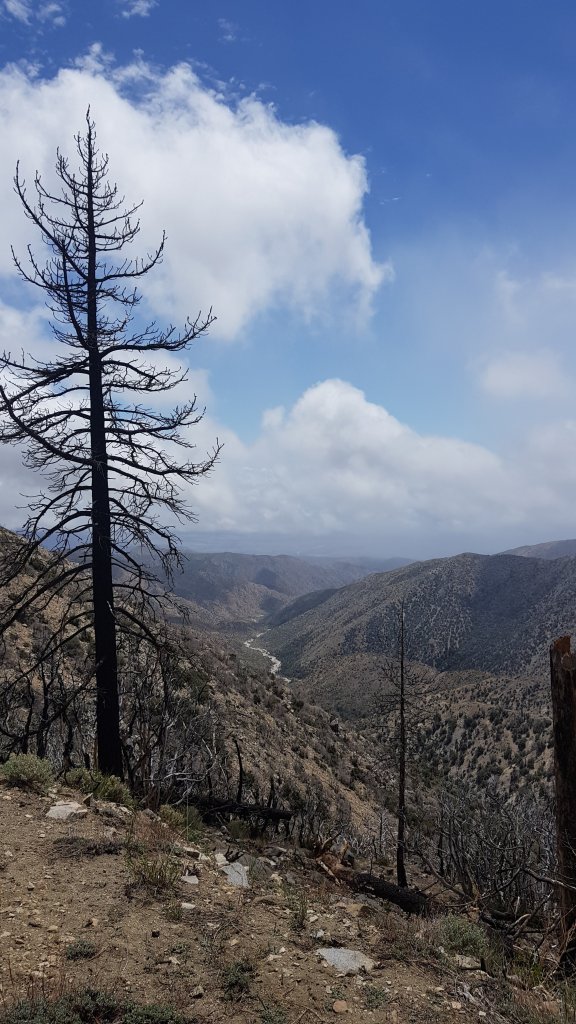