After thoroughly enjoying my stay in Idyllwild it was time to get back on trail today. With a 3 mile walk to get back to the trail head I wanted to get an early start to the day. I was out of the campground by 7 and as my luck would have it, got a ride to the car park with the first car that drove by. As it turned out I was standing on the wrong side of the road, looking to go the wrong direction but a lady and her mum stopped to help me anyway. She was dropping her mum off at work so I jumped in for the ride and she dropped me up to Humber Park afterwards.

I was dreading the steep 3 mile walk up the devils slide trail to rejoin the PCT but it wasn’t too bad in the end. It look me an hour and half. I plodded my way up, taking my time to enjoy the views on my way up.

The beautiful views continued on from where I had left the trail 2 days ago. I could see out over snow capped mountains, the city below and the very distant mountain ranges on the horizon. 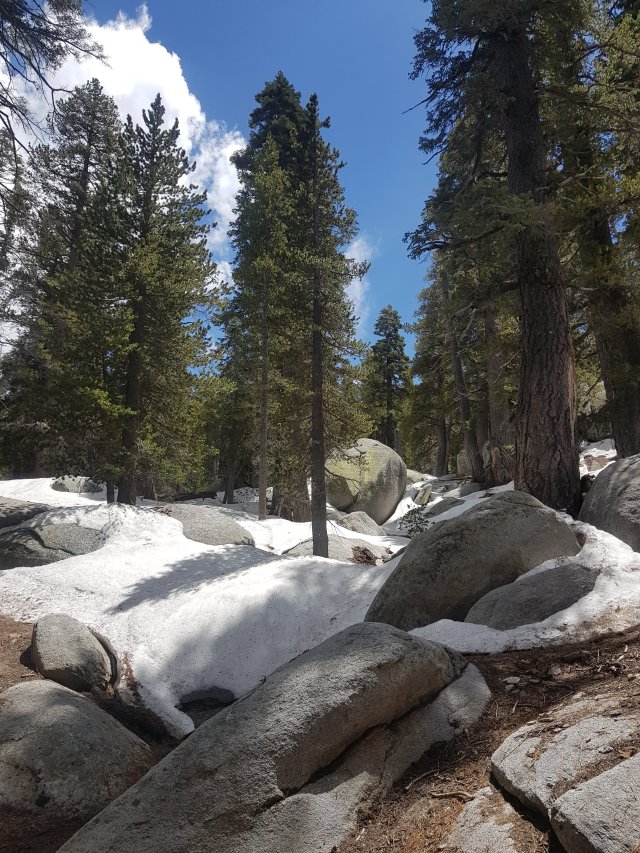 It was slow going today, there was a lot of ups and downs and the trail was still covered by a fair amount of snow. Some patches were so large that it became difficult to follow the trail in some sections and I became reliant on my GPS to guide me. 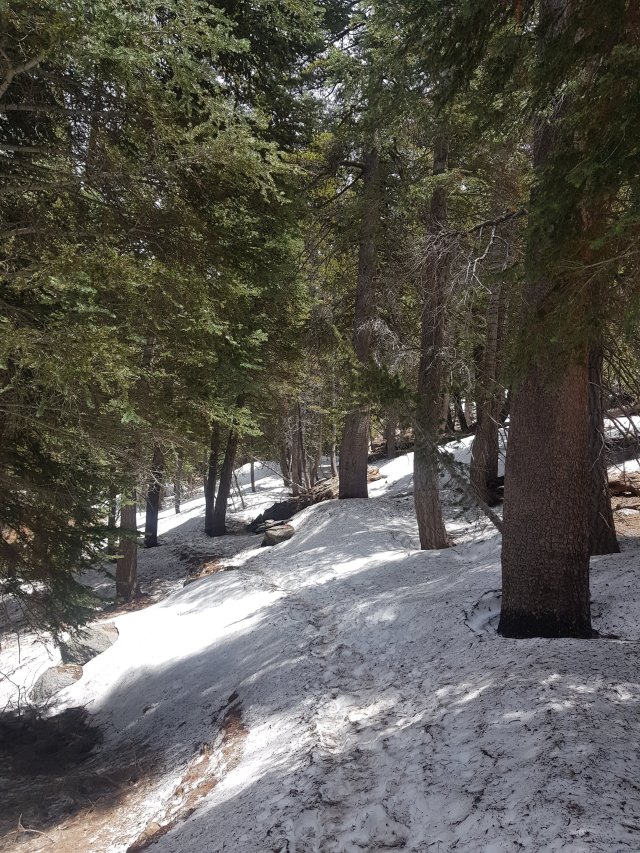 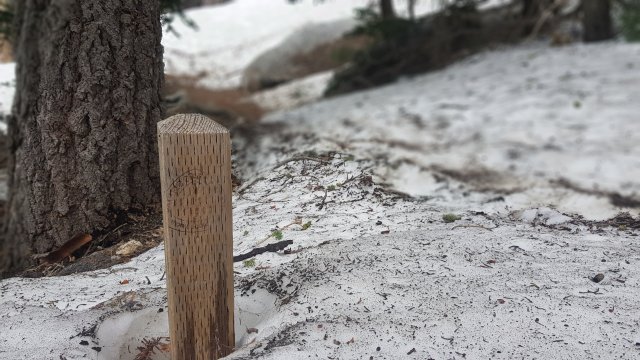 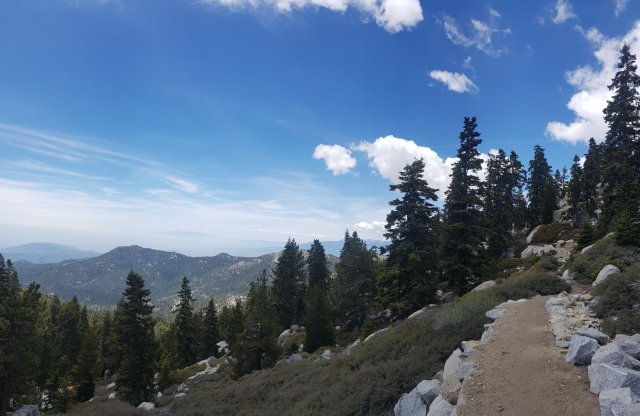 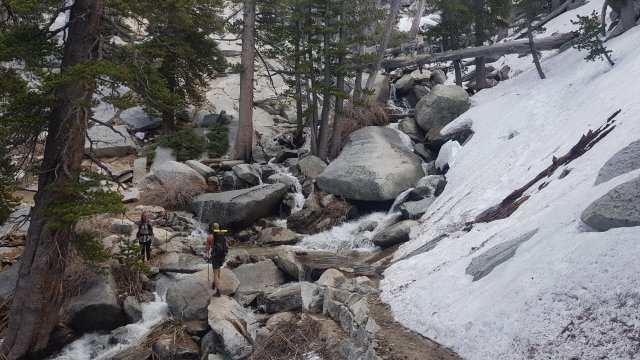 The challenge for the day would be Fuller Ridge, I had heard about it being one of the more difficult parts of this section, holding the most amount of snow remaining on the mountain. Given the large amount of snow melt over the past few weeks it was no longer necessary to wear microspikes to walk this section of trail but it was still very icy and very slippery when I came to cross it. I was glad to have my trekking poles but still managed to slip over twice. It would be my first and second fall of the trail. It is good experience for me, learning how to walk on snow. I learnt that it is as hard as concrete and as sharp as jagged glass when you fall on it. 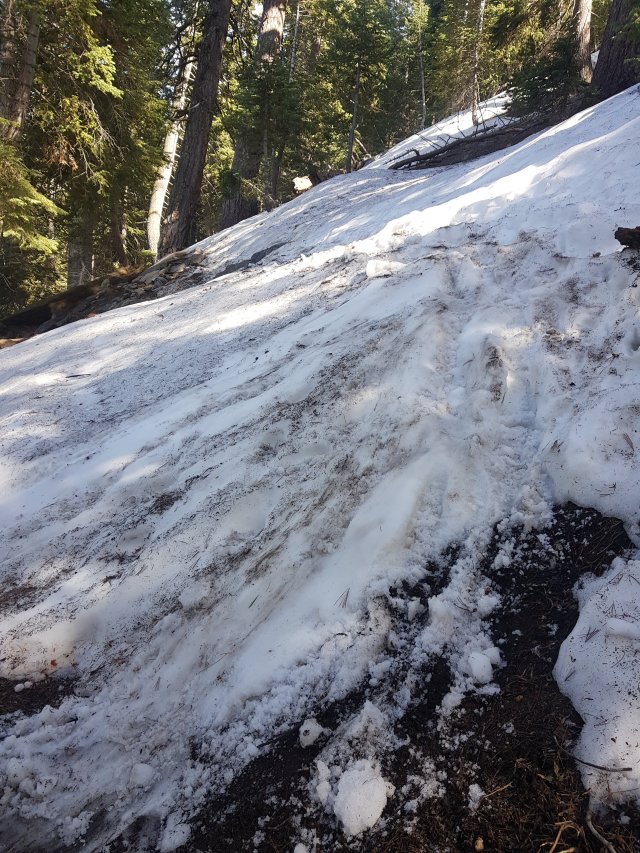 My butt slide in the snow 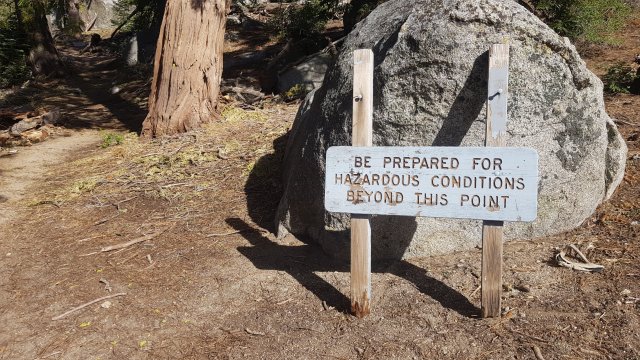 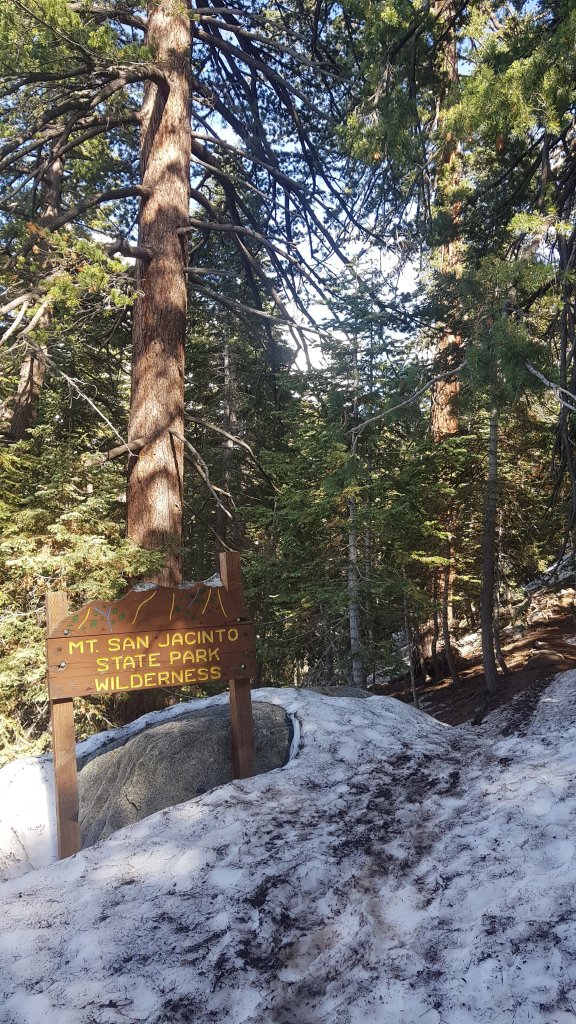 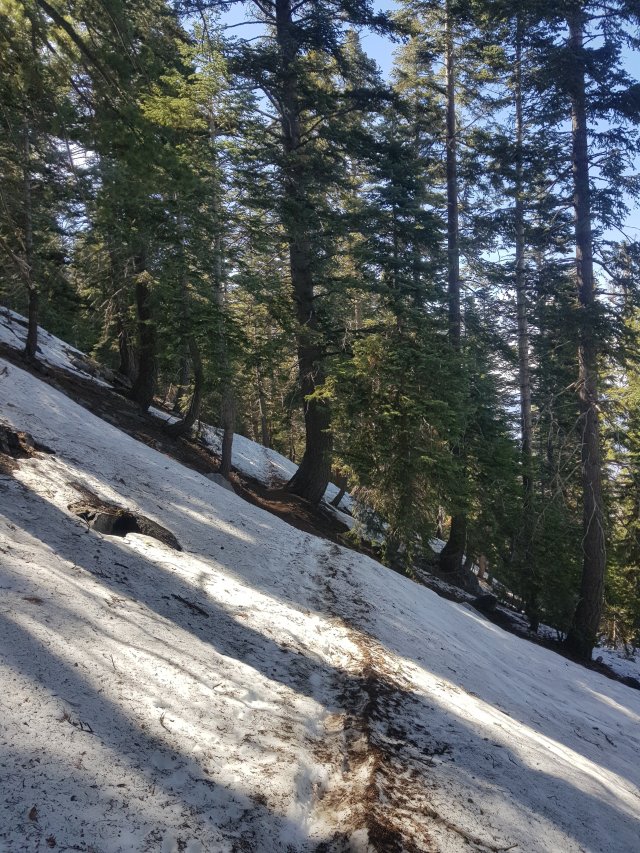 As I began to descend from the ridge the vegetation changed, slowly morphing back into the desert scrub I was walking through earlier in the week. It was a sign that tomorrow I will be back down in the desert and out under the scorching heat. 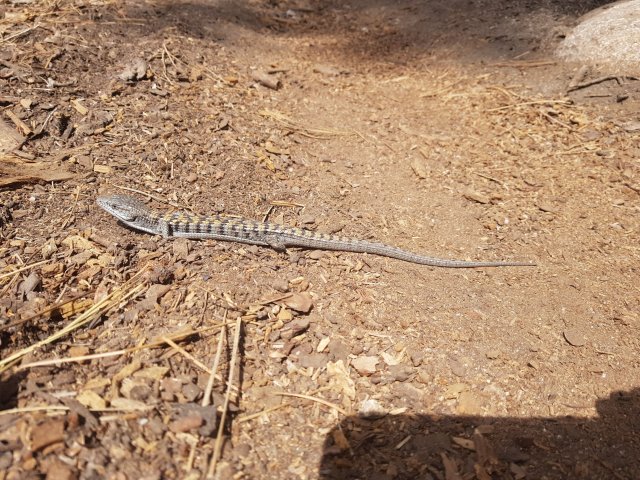 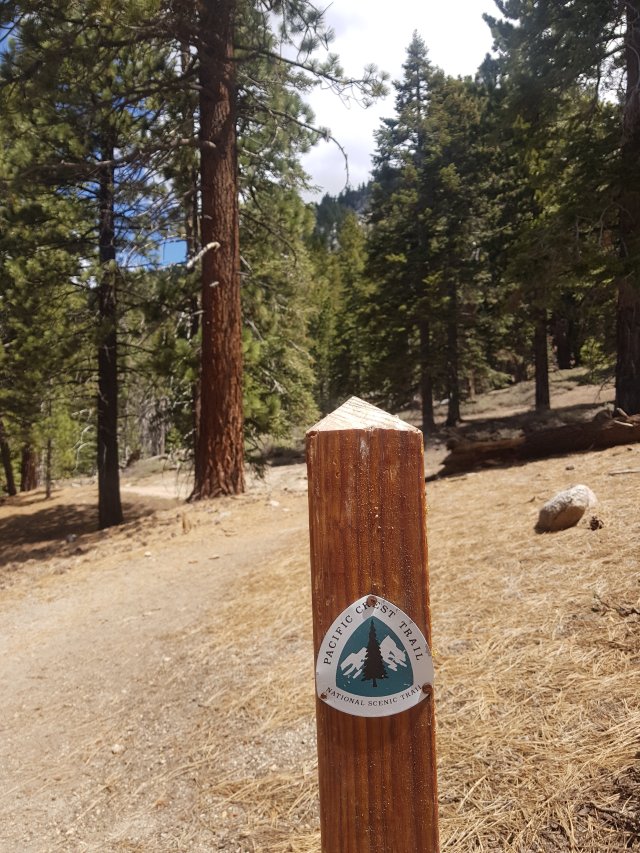 I was hoping to make it further today but the slow travel through the snow, the Devils Slide Trail and the changes in elevation had taken it out of me. I found a campsite close to a water source and set up home for the night.

For dinner I made pink mash with some freeze dried beetroot chips I found on sale in the market and cheese Idaho potatoes. It was surprisingly satisfying. 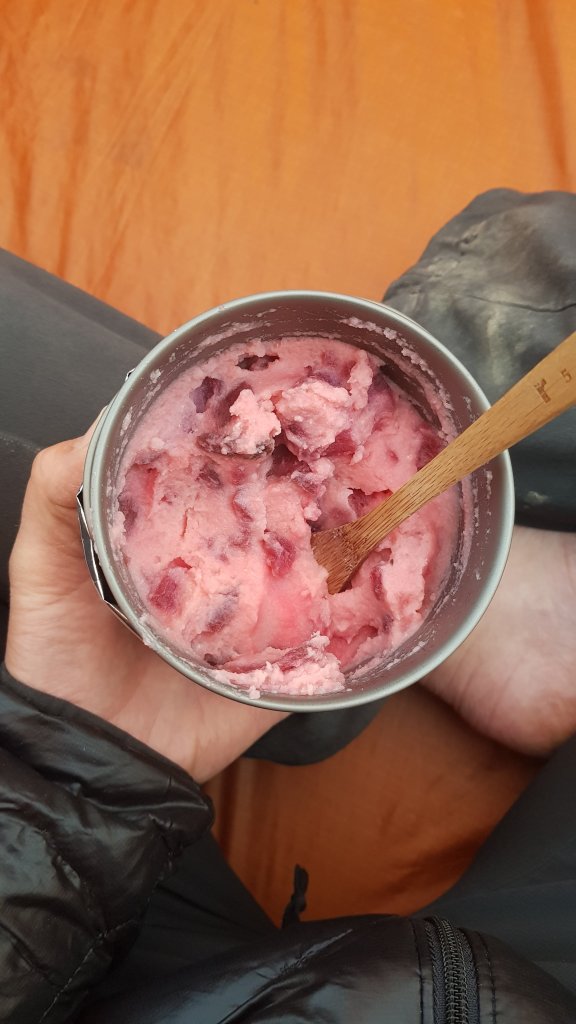 Today started out hot and pretty much stayed that way until I stopped hiking at 7pm. By 7am I was wearing a face full of zinc, hat and sunglasses. 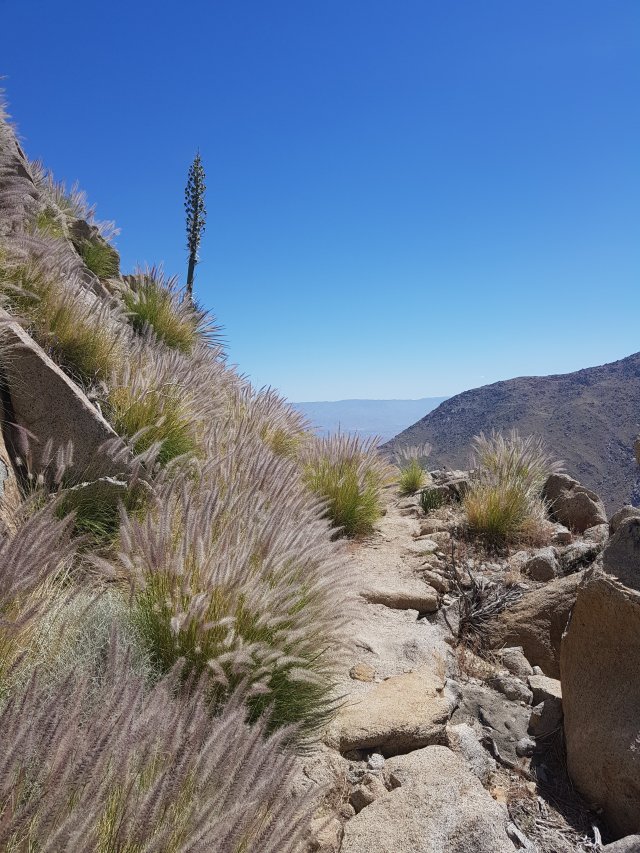 I spent most of the day coming out of the San Jacinto wilderness area down the side of a mountain on a series of large switchbacks. After becoming so used to the kiwi style of hiking (straight up and straight down the sides of mountains) I found it a little frustrating to be walking double the distance I needed to. That said, it is much more kind on the knees when walking on a gradual decline. 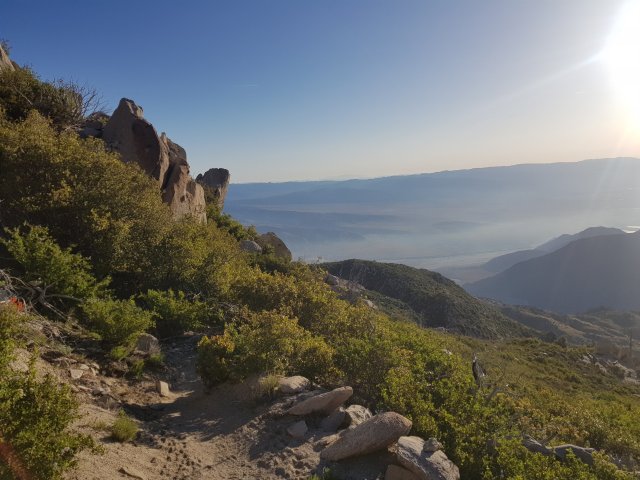 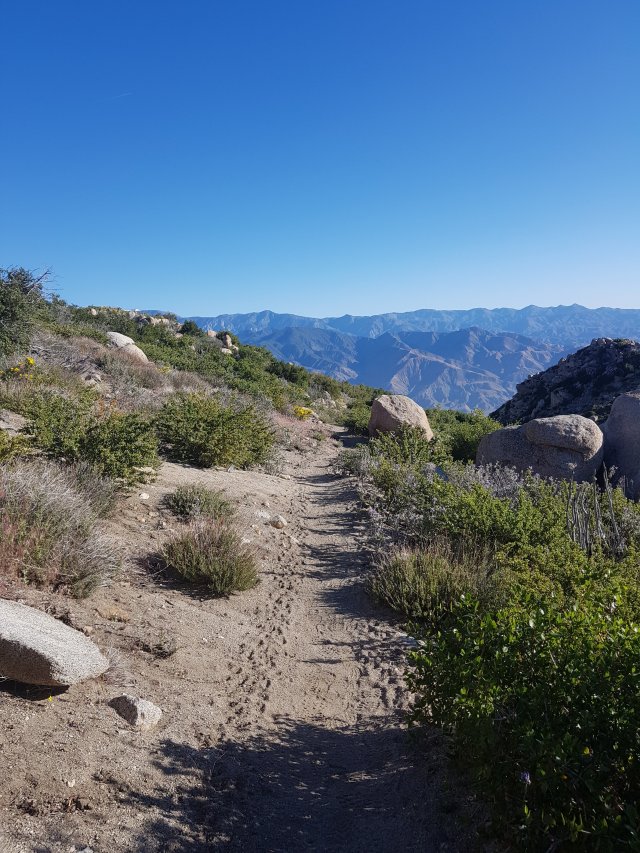 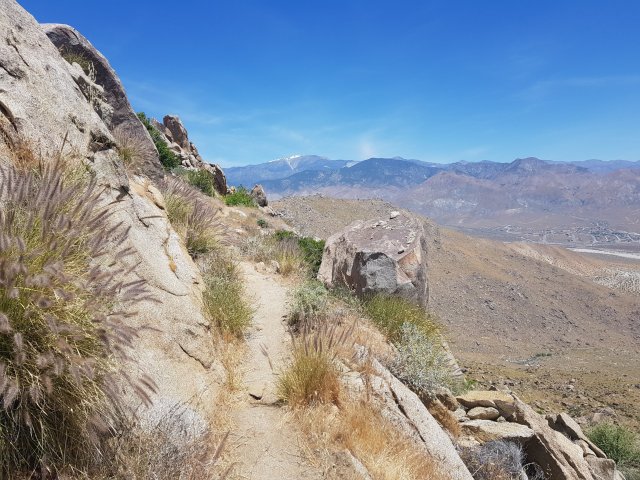 The views out over the valley were beautiful and the lower I climbed the more the windfarm in the valley below came into focus.

Around mid morning I passed the 200 mile marker. It snuck up on me, the second 100 miles feeling like it passed a lot quicker than the first. 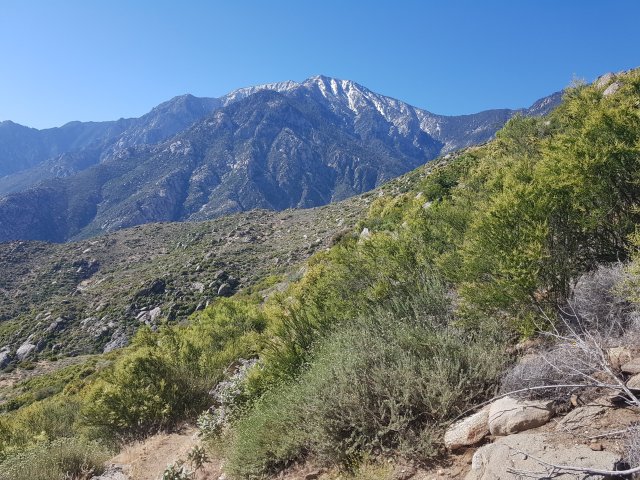 The trail would take me out of the mountains and across the valley floor before I begin climbing into a new mountain range tomorrow. I am learning that trail heads in on the PCT always have the potential for trail magic and at this trailhead I received not one but 2! 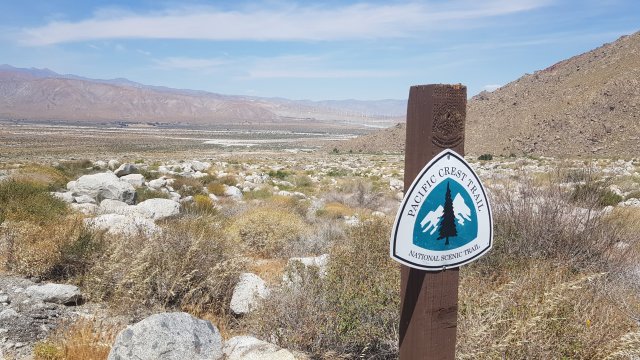 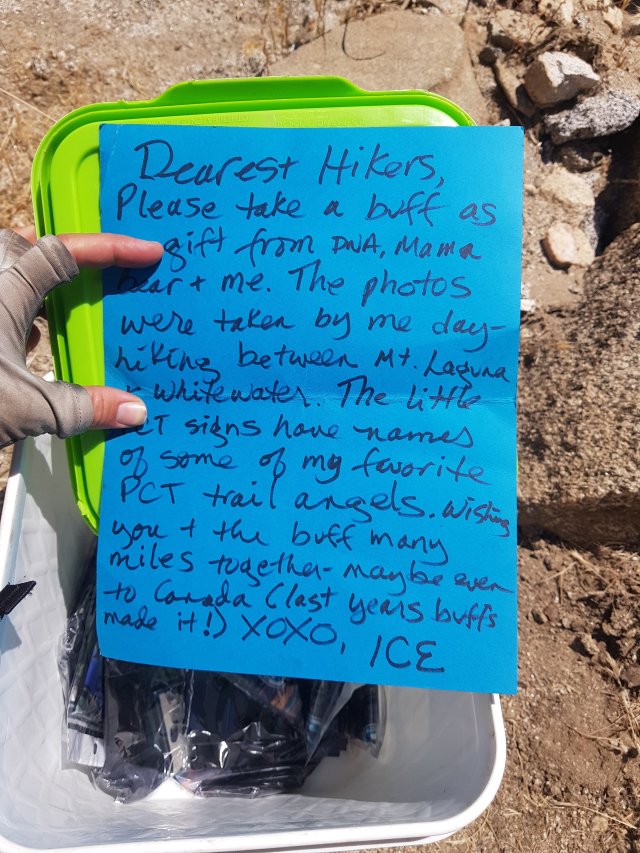 The first was a free buff personally designed by a very generous Trail Angel. It features photos that they took along their PCT hike. The buffs were sitting in a container on the side of the trail, I was a little wary of opening it at first but was glad when I did. 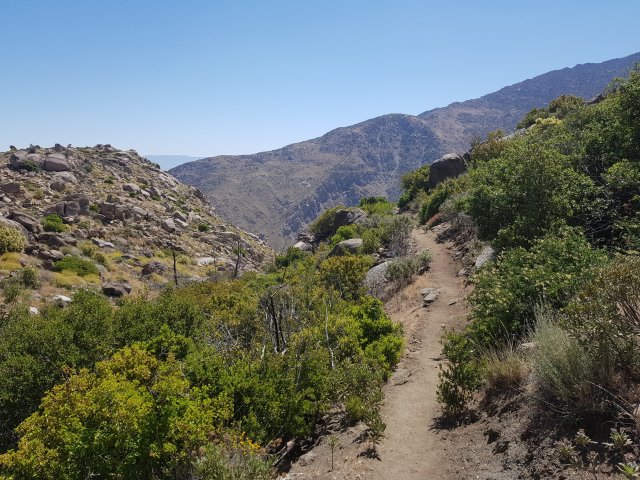 Only a mile after finding the buff I came across my second trail magic. A lovely local couple had parked where the trail crosses a road and were set up with fresh pineapple, drinks and cookies. They had been married a couple of days before and were sharing their left overs with us. It was incredible, especially on such a hot day. I even got takeaway magic of a cliff bar and an apple!

From there on out it was proper desert hiking, through cracked mudflats and dry sandy creek beds. 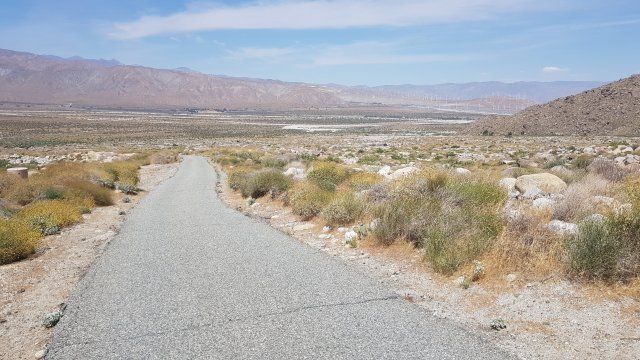 The trail intersects with a major road and rail artery and crosses by way of an underpass. Here a generous local has been leaving water for hikers who may get caught short. From the bridge other hikers were trying to hitch into town to get to a burger shop but after only 2 days on trail and all the sugar from the trail magic I was keen to keep moving. 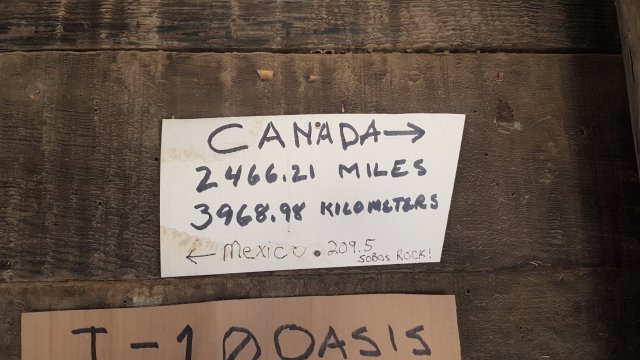 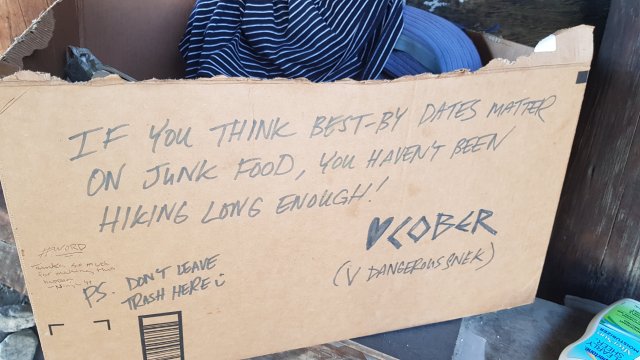 It was incredible how hot it remained so late into the day. From the bridge it was another 4 miles or so to the Mesa Wind Farm, where I was aiming to camp for the night. 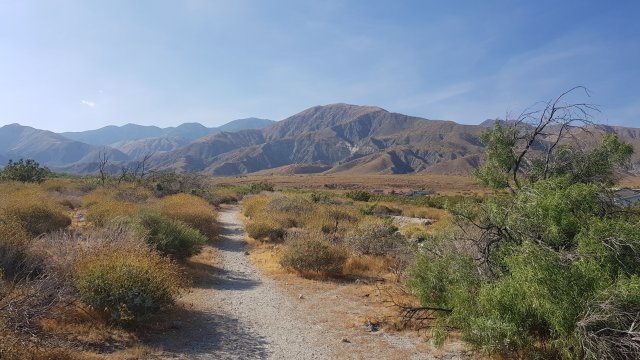 The walking was tough going and I was exhausted after a long day in the sun but I was determined to make it to Mesa. The staff who work out of the wind farm maintenance building support hikers by providing water and access to their amenities. It is incredibly generous of them. They also allow hikers to camp on the property. The office hours are from 6am until 2pm, so I had well and truly missed them when I arrived at 7pm but I went to bed excited by the prospect of coffee and the ability to charge my phone in the morning. 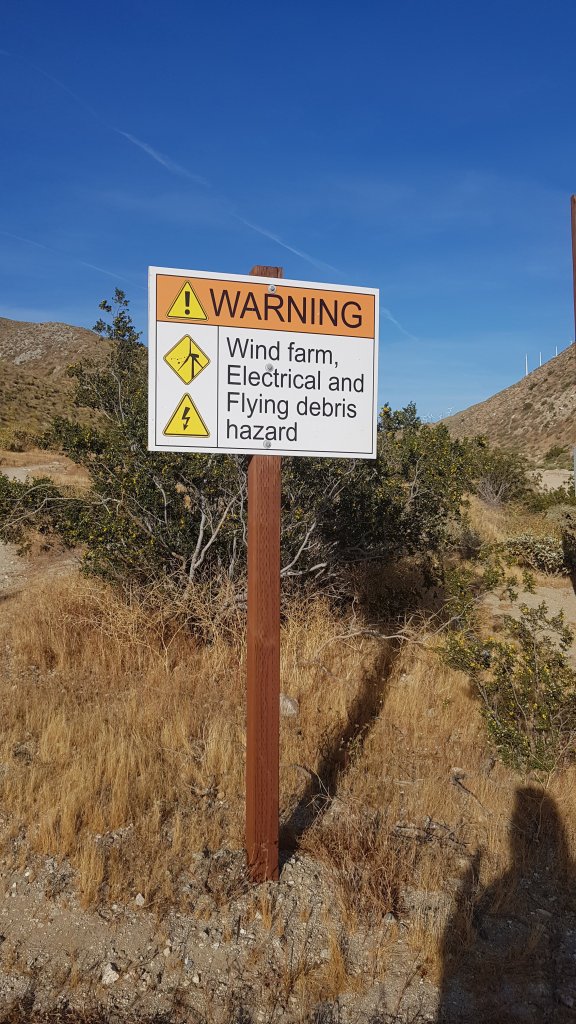